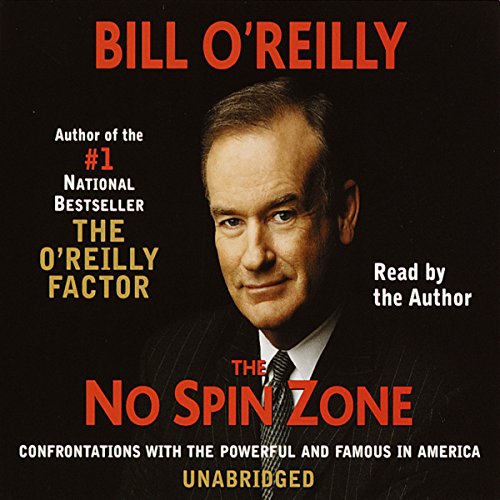 The No Spin Zone

Bill O'Reilly is even madder today than when he wrote his last book, The O'Reilly Factor - and his fans love him even more. He's mad because things have gone from bad to worse, in politics, in Hollywood, in every social stratum of the nation. True to its title, The No Spin Zone cuts through all the rhetoric that some of O'Reilly's most infamous guests have spewed to expose what's really on their minds, while sharing plenty of his own emphatic counterpoints along the way.

Shining a searing spotlight on public figures from President George W. Bush and Senator Hillary Clinton to the Reverend Jesse Jackson, Al Sharpton, and O'Reilly's former CBS News colleague Dan Rather, The No Spin Zone is laced with the kind of straight-shooting commentary that has made O'Reilly the voice of middle America's disenfranchised. Examining sex and violence in the media and the tarnished legacy of the Clintons with the same feistiness as the death penalty (which he opposes) and timid national news organizations that roll over for the powerful, Bill O'Reilly delivers not only his opinions, but the documented attitudes of the country's movers and shakers as well. It demonstrates just why O'Reilly has become the most successful, the most controversial, the most beloved (by some) and the most disliked (by others) figure in television news today - and a culture hero to tens of millions of everyday Americans. And that's fact, not spin.

What listeners say about The No Spin Zone

Bill O'Reilly is such a great speaker, and that really makes this book come alive. It was packed with info and energy, and his very entertaining opinions, and I will be adding his other title, O'Reilly Factor to my Wish List.

Fantastic (in the sense of fantasy)

Far from being no spin, this things spins into loopiness. Its hard to tell whether its right propoganda or a radical left attempt to infiltrate the right with bizzaro, crazy thinking. O'Reilly is not smart, but he's a solid practitioner of filtering reality into one (albeit looney) interpretation of things. If you like that sort of escapism, this one could be for you.

To the point and GREATLY enjoyable. Can't wait for the next book.

Just a rehash of his show.

Boring. He just reads his show transcript. Topic X, Guest Y. I said ABC, they said xyz. Repeat through over a dozen topics. Noting in depth, just the highlights.

Same as Franken's book, in a way.

OK, so now I've listened to both O'Reilly and Franken. Both do a good job of packaging and delivery, but when you unwrap either package you encounter the distinct smell of fish. Sorry, but I don't have much use for either one of these guys, apart perhaps from wanting to see them rip each other apart on an episode Celebrity Death Match. Make Jesse Ventura the guest referee and have him finish off the survivor. Ventura's book is much better that either O'Reilly's or Franken's.