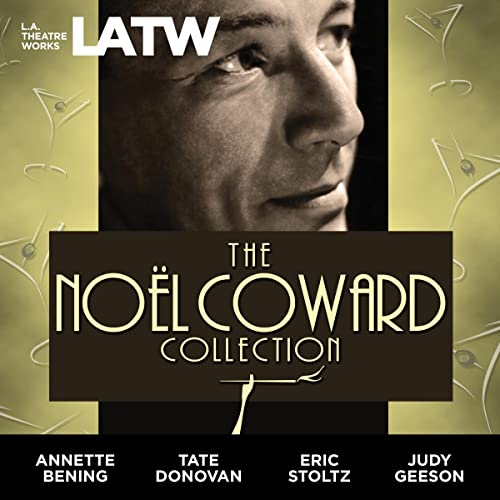 Fallen Angels: Julia and Fred and Willy and Jane are happily married and the best of friends, until a postcard arrives with news of the imminent arrival of a certain handsome Frenchman—gay, debonair, and utterly sophisticated. Performed by Annette Bening, et al.

Private Lives: On the French Rivera, the lights of a yacht are reflected in the water and in the eyes of four hilariously mismatched lovers. Perhaps Coward’s greatest comedy, Private Lives shimmers with romance, desire and bittersweet truth. Performed by Rosalind Ayres, et al.

Present Laughter: Stage star Garry Essendine struggles to plan his trip to Africa while his flat is invaded by a love struck ingénue, an adulterous producer, a married seductress, Garry’s estranged wife Liz and an aspiring playwright who is quite, quite mad. Performed by: Ian Oglivy, Yeardley Smith, et al.

Blithe Spirit: A convivial evening party among friends is transformed when a séance conjures the ghost of Elvira, the host’s first wife, who delights in wreaking havoc among the living. Performed by: Rosalind Ayres, Ian Ogilvy, et al.

What listeners say about The Noël Coward Collection

Two great plays and a bunch that aren't bad

Overall this was a wonderfully performed set of Noel Coward plays. I have listened to a number of plays on Audible and LA Theater Works knows how to produce plays for audio. This set of plays has a couple of great plays, several pleasant plays, and a couple of short plays that are witty, but not very interesting. My favorites of this set of plays were Design For Living and Blithe Spirit, both are first rate plays and excellent performances. These recordings really gave me the feeling of experiencing a live performance.

Fallen Angels is not a very deep play, but was wonderfully acted and quite funny. Hay Fever was even lighter, and my least favorite of the full plays in this set, nevertheless it was still well produced and worth the listen.

The plot of Private Lives is rather thin but the characters and dialog are both well written and well acted. Present Laughter is funny and has a bit of depth that makes it interesting.

There were two short plays Design for Rehearsing which is likely enjoyable if you have actually performed as an actor in Design for Living and Age Cannot Wither which has some wit but otherwise seems to be a one trick pony.

Although I could take or leave a bunch of these plays, the two great plays and a few others very good plays along with the uniformly good production values made this recording well worth the listen.

I wish there were indexes for such a compendium... Too hard to navigate the plays blind!

If you could sum up The Noël Coward Collection (Dramatized) in three words, what would they be?

No each story was a pearl in the necklace

Thought I would expose myself to plays by Noel Coward, thinking he would be witty. I was half right. Sad excesses leading to even more tragic, anachronistic consequences ... real letdown.

Would you listen to The Noël Coward Collection (Dramatized) again? Why?

The collection is built of classical stories that build layer upon layer of comic and classic statements. You need to listen again to pick up the gems hidden in the comments

I honestly don't have one - i love Blythe spirit as a plot but the characters are so diverse it i don't have a favourite.

I could have done without the narrator - i wanted the purity of the play - but they have a role i guess - they certainly were not the best thing about the content.

Shame the american narrator was so heavy in accent for such stereo english material. But you can't restrict Coward to the UK - his genius deserves a world platform.

Where does The Noël Coward Collection (Dramatized) rank among all the audiobooks you’ve listened to so far?

The best of the audio books I've read so far.

These are recordings of radio plays. The parts are played by excellent professional actors, including the superb Ian Ogilvy.

Super listen especially when you are working at home and want to listen in short bursts!

Firstly a couple of the accents are a bit dodgy but not distractingly so, if you can get past those these are great productions of very funny plays. A highlight is the second act of Fallen Angels which is hilarious. The only downside is that on my phone all I have is chapter numbers (it may not be the same for everyone) so my advice is when the next play starts use the bookmark to make a note.

What a pleasure and fun!

Got the power cut lasting countless hours and we got entertained by the plays! Was such a pleasure. The delivery of actors and quality of recodring. Please don’t miss it!

Hadn't met Fallen Angels before. Laughed out loud while walking, luckily naighbours know by now. Recommended to postwoman, as an antidote to our usual thrillers

Absolutely hilarious. Loved the writing and the performances. Really good value in the collection. Enjoyed it.

Comedy you can understand

I love the fact that the comedy is understandable. The dialogue is comfortable, not offensive and so easy to listen.
I love listening to these performances on Audible.