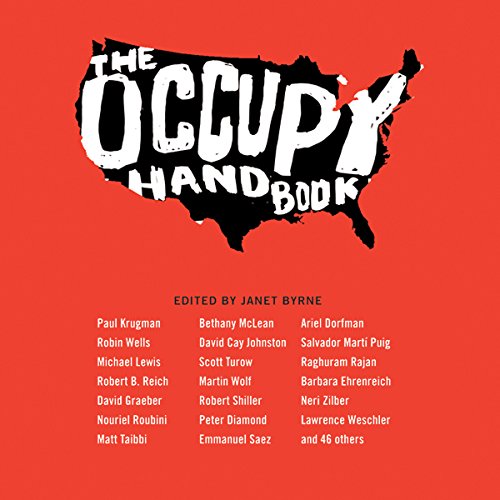 Analyzing the movement's deep-seated origins in questions that the country has sought too long to ignore, some of the greatest economic minds and most incisive cultural commentators capture the Occupy Wall Street phenomenon in all its ragged glory. They give listeners an on-the-scene feel for the movement as it unfolds while exploring the heady growth of the protests, considering the lasting changes wrought, and recommending reform.

A guide to the occupation, The Occupy Handbook is a source for understanding why 1% of the people in America take almost a quarter of the nation's income and the long-term effects of a protest movement that even the objects of its attack can find little fault with. Contributors include Paul Krugman, Robin Wells, Michael Lewis, Robert Reich, Amy Goodman, Barbara Ehrenreich, Gillian Tett, Scott Turow, Bethany McLean, Brandon Adams, and Tyler Cowen, as well as prominent labor leaders and young, cutting-edge economists and financial writers whose work is not yet widely known.

What listeners say about The Occupy Handbook

This is a collection of various essays, and so, the quality varies greatly. Some of the articles are quite good. Others can use some help. One argument which really bothered me was this: this author argued that there was a redistribution of wealth from young to old. His proof was that the average 65 year old head of household has greater wealth than a 35 year old head of household, and that this gap has grown over the last 30 years. What he failed to deal with was some simple items. Biggest wealth item in the middle class is typically a home, and at age 65 with retirement looming, it's more likely to be paid off and so have more equity than a 35 year old. Also, when you include real estate holdings, the value of a 30 year old home has gone up a great deal. Whether I see that as being the fault of the AARP is a stretch. And, the gap may have grown for 2 reasons, with the first being a huge rise in the value of homes over the last 30 years, and the switch from defined benefit pensions to define contribution plans like 401k, IRA, etc. The latter are included in wealth stats and the other not, since you can't borrow from your pension nor pass it on, other than survivor benefits. And, while I appreciated the explanation of the anarchist viewpoints for my own education, to treat these utopian dreams as legitimate forms of national organization seems to demean the serious character of the book. OWS still exists in one sense, and, in others, has passed as the police cracked down on all the encampments. It is worthy to ask what the movement has accomplished and look for it's follow ons. Various authors did speculate in their essays on what's next. It would be interesting to study OWS and look for those impacts using these prognostications as a starting point. Interesting, but do be careful, as not all viewpoints are as well grounded.