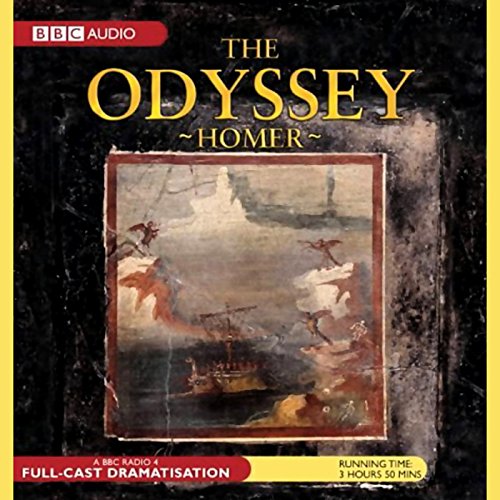 Winner of the Audio Drama category at the Audies, 2009.

"My fame is written in the heavens, and my fate too..." So speaks Odysseus as he starts to recount his struggles to sail home to Ithaca, in one of the greatest pieces of storytelling in Western literature. The Odyssey is his incredible traveller's tale, and also the story of his faithful wife Penelope who waits for him, besieged by suitors, and their son Telemachus who has a quest of his own.

In a 20-year journey, fabulous fantasy mixes with extraordinary reality as Odysseus encounters enchantresses, nymphs, monsters, prophets, and ghosts. From the temptations of the lotus flowers and the Sirens' song to the horrors of the Cyclops' cave and the Land of the Dead, the story of his encounters is riveting. We hear of Circe, who turned his men into swine; Calypso, who held Odysseus prisoner for seven years; and the dreadful six-headed monster Scylla who devoured some of his crew. And we hear of the Gods, who have a vital role to play...

Dramatised by major contemporary poet Simon Armitage to celebrate the return of the Olympics to Athens, this full-cast production brings Odysseus's adventures to vivid life, conveying all the excitement, suspense, and poetry of the original. A stunning aural rollercoaster ride, The Odyssey will have your heart in your mouth and stir your soul.

What listeners say about The Odyssey (Dramatised)

Excellent, but not an exam reference!

This multi-voice dramatization of Homer's Odyssey is very well done, but don't use it to study for that exam on Greek literature.

The narrative is all there (I think), but the language is thoroughly modern. In a sense, it probably better recalls the true telling from Homer's day, since these Greek sailors were rough guys ready for a fight, and you get the feel from the language used here. Homer probably meant to convey that impression as well, but a direct translation probably would sound more stilted than anything.

Alas, there doesn't seem to be a corresponding performance of the Iliad on Audible.

This was my first audio book download and I was truly impressed. This was a great dramatization and I recommend it to everyone. The voices were professional and easy to listen to. And the whole production was also professional and enjoyable

I wanted to get exposure to the story, but had always feared it would be dry and tough going. The dramatized version definitely added to the entertainment value and made the story much easier to pay attention to. I would highly recommend this dramatized version.

A way in to Homer

This reading of the Odyssey is dramatised by Simon Armitage, one of Britain's finest contemporary poets. He manages to get across the sense of Homer's poem using contemporary language. It really works. The use of street language, for example, reminds us that Homer's companions were pretty rough and ready. The actors live up to Armitage's fine script. I'd strongly recommend this recording, first because listening to it is such a pleasure, and second because it is useful to anyone who needs a sense of this influential work--students of English literature, for example.

This audio book was Fantastic! This was my first audio book and it got me hooked on "Dramatized" books. A must have.

An epic tale given a fitting treatment.

Homer's grand tale of Odysseus returning from the battle of Troy is meant to be heard, not read. This is a tale recounted around hearths and fireplaces for centuries, and it's lost nothing over all those years. Tim McInnerny is perfectly cast as Odysseus, weary and homesick warrior whose only desire is to see his beloved homeland of Ithica once more. McInnerny (known for his role as Percy and Darling on Blackadder) gives the role of Odysseus its full complexity - the bravado, grandeur, honour, wisdom, hubris, humility, fragility and desperation that the role requires. They couldn't have chosen better. This is a grand telling of an epic tale. Listen and be enchanted.

A master class of storytelling and acting all in one package. I’ve never really experienced this epic story before, but was a wonderful way to get me introduced to Homer’s epics. Plus Cumberbatch is in this! If you love audio dramas, great acting, and/or great stories, this is a must listen!

The Odyssey never disappoints - A story for the ages

This is a wonderful dramatization of the most moving story of all time. The performances, all of them were superb. McInnerny brought the wily hero to life and the others from Penelope to Zeus reached dramatic mastery. The story, is of course, a cornerstone of Western literature and culture. It is essentially the handbook of how and what it is to love, to be faithful and to be a man.

I have listened to this more times than I remember! What a wonderful performance, I saw every scene. Thank you to everyone!!!!

I picked up this book rather randomly, more from a historical interest (the clues to what it was like to live in a time without news, electricity, the foggiest idea about evolution etc.) than for the story. And yet there were times when the story carried me away. Being of a similar age to Penelope and having a son not so unlike Telemachus, I could identify with the emotions of hubby and wife and son after 20 years of separation.
Narration. This is a performance, a dramatisation, not a book, and it is exactly what you would expect from the BBC. Professional, articulate, quality production.

BBC Dramatisations are funny things - they are often well produced, but the subject matter is either modern controversy-for-controversy's sake or an overwrought historical piece. Rarely do you get something that is skillfully acted, with a good story and that is a notable classic.

Happily, this Audiobook is all three, with the excellent Tim McInnerny (Captain Darling in 'Blackadder') as Odysseus, Amanda Redman as his long-suffering wife and many other well portrayed characters aside. The narrative flows well and creates convincing audio-landscapes which only go to prove that scenery is always better in your head!

My one criticism (to echo the 4 star reviewer 'Reeves') is the accuracy of the narrative. To make for an interesting story, the characters have been altered from what they should be, and the text itself (being a dramatisation) is not the same as the book. However, the story is fairly close to Homer's original intention, even if some of the narrative and personalities of the actors are a little different.

To conclude, this dramatisation is fantastic if you want to get a good impression of a classic story of the ancients. It is clearly no substitute for reading the real thing but, sometimes, things such as these can make subjects accessible to study, when previously they felt like swimming in treacle! I certainly have found this audiobook helped me appreciate a story that I would not have fathomed in other ways.
So, if you want some good listening for the car, then look no further than this book...

This is very much a modern telling of the tale. The drama uses modern language and as a result has a different tone to the book. At one point Polyphemus (cyclops) is described as a one eyed retard! Also Telemachus's trip to pylos is missed out completely, he departs then he is back again.

Apart from the above, this is one of my favourite audiobooks. The cast is excellent and the story after all is an all time classic.

Poor Odysseus, after trekking across the sea under the banner of Agamemnon to kill a load of people, completely unconnected to the crime of their prince, now must face a ten year journey home to his beautiful wife, oh woe, Odysseus!

This BBC production is excellently told, and brings the story to life. The English accents may seem out of place but the quality of story-telling is marvelous.

This is a wonderful full drama really bringing the text to life, with all the quality that the BBC are famous for.

This dramatised productions is by the now poet laureate is fast moving and entertaining. It’s a really accessible way to approach this classic story particularly for those who have struggled to get through the original text. But it’s also a good listen for those familiar with the text bringing a new and refreshingly rugged idiom to the telling.

Love full cast audio this didn't disappoint. I thoroughly enjoyed it the dramatisation was perfect, the visual perception of what I was I was hearing was amazing

Where does The Odyssey (Dramatised) rank among all the audiobooks you’ve listened to so far?

What was one of the most memorable moments of The Odyssey (Dramatised)?

Meeting Calypso, this brought to life the analogous nature of the book which is what attracted me to it in the first place.

What does Tim McInnerny and Amanda Redman bring to the story that you wouldn’t experience if you had only read the book?

They are both great actors and amazing voices. Tim for this ?? I think it needs someone a little more macho than Tim as Lord Percy's character emerged from time to time.

I never listen to a book all in one sitting however as I was taking early morning walks around the Kas Peninsular in Turkey, it was perfect.

I felt thrilled and enlightened by the end of the play, jus fabulous.

Thoroughly enjoyed the narrative and all performances. Highly recommended as a dramatisation to reflect the story of the Odyssey

Well performed if not a bit dull in places

This audiobook is a bit dated judging by the style and voice quality, but it’s a solid performance nonetheless. The voice acting is superb and script is well paced and well narrated. It does get a bit long winded in places with the dialogue but the action and story is well told and made for good listening. Good value and worth purchasing if you wish to be immersed in one of the defining epics of Greek Mythology.