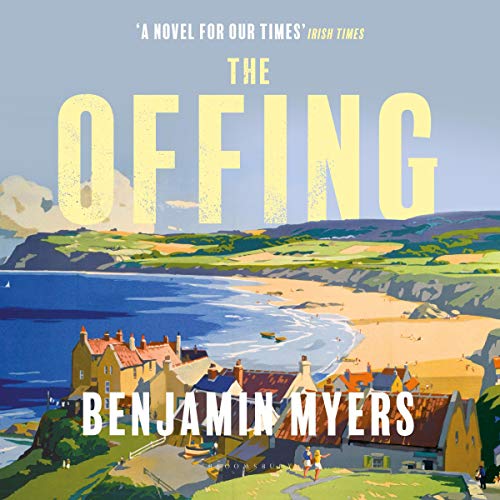 A BBC Radio 4 Book at Bedtime

One summer following the Second World War, Robert Appleyard sets out on foot from his Durham village. Sixteen and the son of a coal miner, he makes his way across the northern countryside until he reaches the former smuggling village of Robin Hood’s Bay. There he meets Dulcie, an eccentric, worldly, older woman who lives in a ramshackle cottage facing out to sea.

Staying with Dulcie, Robert’s life opens into one of rich food, sea swimming, sunburn and poetry. The two come from different worlds, yet as the summer months pass, they form an unlikely friendship that will profoundly alter their futures.

"It’s a poignant story, and Myers’ descriptions of the countryside are wonderful." (Mail on Sunday)

"What a radical thing, these days, to have written a book so full of warmth and kindness...Gorgeous." (Max Porter, author of Lanny)

"This is a poetic book with a winning generosity of spirit, moving from a folksy celebration of the rural north to a revelation of the broader horizons that can come from reading and some serious culture." (Sunday Times)

What listeners say about The Offing

Loved This Book - Sad when it ended

When I first began to listen, I wasn't sure if I would enjoy this book. However, I soon discovered that I Loved it...and devoured it in two or three sessions. We hear Robert going from an unsure and anxious 16 year old to a mature and then much older man.

Everyone needs a 'D....' in their life ... irreverant. funny and abundant in her generosity. I really did not want this book to end.

The narrator is excellent too. A good use of 1 credit.

The Offing is quite different in style from the author’s Walter Scott Prize-winning The Gallows Pole which I read the year it was shortlisted. It is much gentler in tone but still quietly powerful. For anyone who’s wondering about the title, the offing is the name for the distant stretch of sea where sky and water merge.

The Offing involves a chance encounter between young Robert Appleyard, who has set off to explore the country beyond his home in a small mining village near Durham, and Dulcie, an older woman living in a cottage on the outskirts of Robin Hood’s Bay in North Yorkshire. It leads to a friendship that also becomes an education for Robert. Dulcie introduces him to unfamiliar foods such as lobster, to wine and to her favourite nettle tea. But she also feeds his mind, lending him books of poetry by John Clare and novels by D H Lawrence and others.

For Robert, what starts as a temporary stay turns into a summer in which his mind and his horizons are widened by Dulcie’s unique take on the world. In return for her hospitality he works on clearing the meadow threatening to overwhelm her cottage and on restoring a nearby shack fallen into disuse. What he finds there unlocks memories of the past for Dulcie as well as setting Robert on a new path in life, one he never thought would be open to someone with a background like his.

I loved the descriptions of the natural world and the glorious meals Dulcie prepares for Robert. More than anything, I loved Dulcie – for her generosity, wit, independent spirit, wisdom and determination to live life by her own rules. As she says, “After all, there are only a few things truly worth fighting for: freedom, of course, and all that it brings with it. Poetry, perhaps, and a good glass of wine. A nice meal. Nature. Love, if you’re lucky.” Dulcie sees the potential in Robert that he can’t see himself and is intent on nurturing it as she once nurtured the talent of someone else.

I listened to the audiobook version narrated by Ralph Ineson. His deep, husky voice and northern accent were a good match for the slow unwinding of the story and its rich descriptive passages.

As well as being a compelling story of an unlikely friendship, The Offing is a love letter to the natural world, to poetry and to living life to the full. Highly recommended.

Ralph has a soft but strong voice that can be comforting but strong. The story took me some time to piece together but I enjoyed it immensely once I could see where it was leading. An enjoyable first audible offering,

Amazing. Loved every moment of this book.

Onto the next Ben Myers book. Got them all stacked up ready. He's absolutely brilliant.

A painfully simple story, lovingly told. A few slightly over the top bits of descriptive narrative but generally beautifully written. A moving and evocative coming of age novel set against the backdrop of a soon to disappear English way of life and countryside.

Such a beautiful, beautiful book, full of poetry. Glorious descriptions of the countryside with characters you actually care about. It evokes the time after the war when England was changed and changing still. Wonderful.

An absolutely wonderful read: beautifully written, real and relatable characters and an entirely captivating story. I'd read it all over again - happily!

I did enjoy the story. I first heard it serialised in an abridged version on radio, read by Kevin Whatley. Ralph ineson did just as good a job as the narrator.. brilliant voice.
I did find some aspects of the writing jarred a bit.. the author is fond of a bit of purple prose! despite the narration being given by the adult, educated character, I felt it would have been more authentic if the language used reflected his younger, uneducated self at three time the story unfolds.

beautiful tale set in one of my favourite places

Loved every bautiful word of this intricate narration of rural English countryside, nature and seascape. compelling tale of relationship between a very capable but unread 16 year old and his relationship witj a highly intelligent articulate learned oldet woman and her eventual influence on his life...I loved every sentence.

Prepare to be transported in time, in possibility, in adventure and in life. I loved this story and would recommend it to cozy up with.