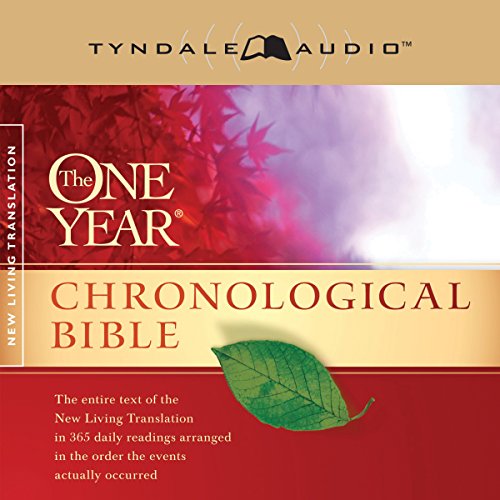 The One Year Chronological Bible NLT

You can fit Bible reading into your already busy life by listening to The One Year Chronological Bible NLT! In as little as 15 minutes a day, you can hear the entire Bible in one unforgettable year, expertly narrated by Todd Busteed. This Bible audio is unique in that you can listen to the Bible text in the order that the biblical events unfolded. The New Living Translation is an authoritative Bible translation, rendered faithfully into today's English from the ancient texts by 90 leading Bible scholars. The NLT's scholarship and clarity breathe life into even the most difficult-to-understand Bible passages - but even more powerful are stories of how people's lives are changing as the words speak directly to their hearts. That's why we call it "The Truth Made Clear".

Wonderful Way to Read the Bible in a Year

There is something powerful about listening to the entire story of the Bible from beginning to end in modern English. For example, after slogging through hours and hours of depressing stories of Israel turning away from God in the Old Testament, the story of Jesus' incarnation truly felt like light bursting into darkness. You can really feel how it was a rescue mission to a world that didn't deserve it, and the power of God's love and commitment to His creation hit me more powerfully than if I had started in at the Gospel accounts.

I prefer other translations and formats for in-depth Bible study, but having a slightly different translation than what I've always read jarred my attention just enough to keep me from skimming over familiar verses. The struggle with listening is that it's easy to get distracted, so I still think actual study is important. But listening is a great way to add the Bible into the moments of my day when I can't hold a book. Having the Word poured into my mind while I'm getting ready in the morning or driving or chopping vegetables for dinner is a great way to keep me focused on truth, even if I don't catch every word.

With an audio format, reading the Bible through every year is very doable, even for very busy lives. We all have moments when our hands are occupied but our minds aren't--what better way to fill those moments than with the Word of God? Now that I've finished, I plan to start all over again.

Interesting way to read Bible in One Year

Where does The One Year Chronological Bible NLT rank among all the audiobooks you’ve listened to so far?

This is a pretty audiobook. It's not the best but it ranks up there among the top ten so far.

I hear the whole story of the Bible in chronological order, which can get repetitive at times in the Old Testament but it's instructive to see how many times and ways the same story is reflected in various places.

He reads slow enough to be heard but not so slow as to be ponderous. He adds the right amount of inflection so I can hear some emotion in the words without his voice pandering to emotionalism.

There are lots of times when the Bible's words moved me.

The only flaw in this audiobook is that it usually does not make it clear WHERE he's reading from, which is a problem especially in the Old Testament where he moves around between various books of the Bible. I'm not familiar with this translation and more than once I wanted to look up the text because I was surprised by a word choice. Unfortunately I cannot look up the verses because the audiobook doesn't tell you where the narrator is reading. It's a major flaw.

Index does not reference bible

Being a chronological bible, it's possible that chapters from various books in the Bible may have the same story.

Good resource to go with your One Year Bible

Our church is doing a study of the One Year Chronological Bible. I bought this audiobook to help keep up with the daily readings on days where I was on the go and found that listening to the daily readings while driving or walking was the only way I could get the reading in for the day. However, I also have found that listening to the daily reading to be very helpful on days where I have the book version of the Bible in front of me. As I am listening to the audiobook, I can underline key passages and can see and hear the material at the same time. (And as another member of our group commented, it helps with the pronunciation of many challenging Old testament names while you are reading passages.)

Because it is so long, the audiobook is divided into 7 sections of book that you download. Then each section has "chapters" for the daily readings that are divided and labeled by the date in the year. But the downside to this is that you don't hear the book and chapter and verse from the Bible that the reader is reading on the audiobook. This is also a shortcoming of the book version of this same Bible. The scripture references are shown in small print for each day, but the material is divided by days of the year, not by Book and Chapter/verse references that come with a standard Bible. Groups using this Bible, typically discuss material by referencing dates or page numbers, but not the scripture Bible Book and chapter has you would in other Bible Studies. This is confusing for some. And I do agree that it would be even more confusing if I did not own the book version of the same Bible where I could see the book and chapter references in small print at the top of each day.

Also, there are several editions of this One Year Chronological Bible with very, very minor wording differences that happened with each edition. So if you are listening to the audiobook version and following along on your printed version of the Bible, there have been two times, so far, in the first month where there are slight differences in the two versions. This isn't a big issue for me, but possibly may be for some.

Overall, I highly recommend this audiobook, especially if you also own the book version of the same Bible. The reader is very good and had good expression and pronunciation of Bible passages. This audiobook can be a help to keep up with the daily readings of the One Year Bible!!

Bible consists of many chapters divided by many separate audile files which are not labeled or named. So hard to continue where you left off and you have to click around to find what you need. Not well organized

I’m not sure what the performance rating includes but I found the narrator sucking in air so distracting that I’m not sure I can continue listening. I was hoping that I would get used to it but after several attempts at listening the the “sucking” noise drives me nuts. I think it might have something to do with the recording equipment of microphone as well.

The New Living Translation is a wonderful translation for easy, relaxed reading. Even better is the fact that it is now available in chronological order for those who find such things wonderfully beneficial. And this audio edition is performed with excellence. It is highly recommended for any newcomer to the faith as well as the seasoned, studious saint. Everyone on either end of the spectrum (and anywhere in between) will benefit greatly from this resource.

listening to the Bible in chronological order is very refreshing. I think it actually aids in remembering many of the events, particularly in the Old Testament. I thoroughly enjoyed it. Worth listening to!

Not a true One Year Bible

This audio version does not break the Bible out by day of year which is the purpose I bought it in the first place. It also doesn't tell you what book you are reading from, everything is listed as Chapter #. I would return it if I could.

Save your money and buy the hard copy

great exrrcise, everyone sold read/listen to this book. not having the discipline to read this book, the audible version was an excellent alternative.

some good some bad

great voice and pace and after yrs of trying to read its been easy to get through via audible. issues are: why is us version of amazon only 7.99usd for the audible versus uk version at £14 for the audible. not cool. also the chapters arent explained to what they relate to. so if i want to relisten to the book of john or paul etc i have no idea how to get to there on audible which is a biggy!

great to learn how things slot into order

it's well narrated, but a bit slow - i had it comfortably at 1.4x and then it was much better. only other downside as mentioned by other reviewers is the lack of book names or chapters so there's no way to know where you are or to return to any particular part...though in fairness i do understand that having those in would spoil the narrative

love hearing the bible in order. Very interesting. I wouldn't use this version for study, but it is great to get a different perspective of the bible. Can't recommend enough.