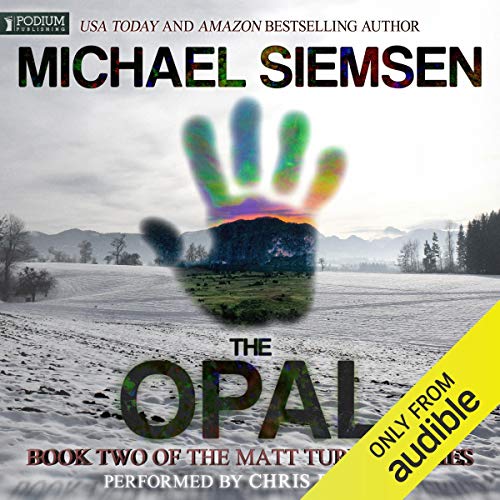 Matt Turner grew up witnessing firsthand the worst crimes imaginable. At age nine, he discovered his special ability to "read" the emotional imprints people leave on objects. Against better judgment, his police detective father used his son’s talent to help him solve crimes. Now, at 26, Matt tries to keep to himself, but an enemy he thought long gone interrupts his tropical vacation, flying him all over the globe to help track a 3,500-year-old Egyptian opal found sealed in a Cuban tree trunk. In Cuba, Matt finds not riches but even deadlier foes, and the secrets of a long-dead explorer who will forever alter Matt’s life.

Wow this book is bad

Ugh.
I chose this book because I just finished "A Warm Place to Call Home" by Siemsen. That book was amazing. I recommended it to several people. I was ready to read (listen to) anything that Siemsen wrote.
Wow, "The Opal" is bad.
Where to begin...
The very initial premise of this book is a good one, seems fun, seems like it could go places. But the implementation is terrible. The reader/listener ends up in strange worlds meeting strange people and needing to follow along with strange stories that have nothing to do with the actual story and Siemsen never brings the two together or gives any reason why you should care about these other worlds.
The worst part of this story for me was the relationship and what happens between the main character and his wife. I'm not sure what I was supposed to feel about the wife, but I hated her and blamed her for a bunch of what ends up happening, and I don't think that's what Siemsen had in mind.
At the end, I said "oh, you've got to be kidding me." The ending was so bad. The story just limped to a pathetic halt.
The one tiny interesting thing about the story was the question around if one of the bad guys is actually a bad guy--it made me think "hmmmmm" for a minute. I liked that particular story line.
The narrator was fine, no complaints.

I will not be buying any more of this series. I really hope Siemsen writes more books outside this series--I would give those a shot.

Not as good as book 1, but still a lot of fun

The Opal by Michael Siemsen is the second novel in the Matt Turner series. Matt Turner has a gift that allows him to read imprints from objects. All people leave an emotional and mental imprint on objects. This ability interferes with Matt’s ability to live a normal life due his inability to touch nearly all objects with his bare skin. After having completed mission where his used his ability to unearth information about an artifact in Kenya, Matt and Tuni, his coworker and girlfriend, are on vacation. But the corrupt archaeologist from that Kenya dig finds and absconds with Matt, forcing him to read a new object, an ancient opal. Placed in such a traumatic situation Matt tries to balance saving himself and Tuni, who is under guard, safe as well. All the while trying to find out more about this new artifact.

While I still love the premise of the book, I think that this book was less well put together compared to the first in the series. There are still two story lines: one in present time and one in the artifact’s time. The present time story is exciting and action packed. Many of the characters from the first novel are present in this sequel and the plot essentially continues where The Dig left off, which I like a lot about this series. The villain continues to be the villain, which adds a lot of continuity. Matt Turner continues to grow as a person as he comes to term with his feelings about his familial relationship, which are drawn more sharply in this novel compared to the first. Overall, I really like the present timeline. Even though some of the actions that the characters take are suspect, the end was intense and I like how the novel ends. However, the artifact timeline was not as well written as in the first novel and the integration with the present time didn’t seem as fluid either. The opal apparently changed hands relatively quickly, which made most of the characters flat and the story was difficult to follow and to become engaged with. The motivation for following the opals timeline was not as compelling either.

Chris Patton continues to do a great job with the narration. As before the characters are well voiced and voiced with variety, which is good because of the variety of nationalities represented. The production quality of the novel was good as well. I would recommend this novel to people who like action novels with a bit of history and science fiction thrown in.

Audiobook provided for review by the publisher.

[If this review helped, please press YES. Thanks!]

Good but really fell apart at the end.

What disappointed you about The Opal?

People not acting right, I know it may sound like nit picking or I just didn't like the way the story went. After they were brought back together Matt and Tuni did not act as they have up to that point. Both became unreasonable and seemed to be looking for a fight.

What could Michael Siemsen have done to make this a more enjoyable book for you?

Every thing was great with the story until he (the author) tried making the police and army parts late in the book. They were wholly unbelievable and killed the story. If any common sense research or just watch some TV you'd know that no military (not even Cuban) would allow armed unsanctioned US law enforcement to wonder around a crime zone. And the police should know this and wonder why they were allowed to do so.

Only other book from Chis was the first book in this series so it's on par.

If you could play editor, what scene or scenes would you have cut from The Opal?

All of Cuba, felt to far fetched and rushed.

From everyone landing in Cuba on the story felt to rushed and contrived for the sole purpose of witch was to kill off daddy and brake up Matt and Tudi, hook up Tudi and Mr evil overlord so in book 3 there will be some tension and eventually getting back together. I could be wrong but it seems awfully transparent.

If you could sum up The Opal in three words, what would they be?

Matt, because I love his whole personality

What does Chris Patton bring to the story that you wouldn’t experience if you just read the book?

Does such an amazing job!! He brings all the people to life!

Michael Siemsen is great. I am so glad I came across his books and I am now a loyal follower.

Another great story in the series

Unlike the first book I did find this one a little harder to follow and at times a little slow. That being said it had a lot of twists and turns and was a bit darker then the first book. I'm looking forward to the third book in this series.

I enjoyed the 1st book in th eseries much better

The performance was similar to the 1st book in the series but the story and characters drop in quality. In the 1st book Matt is a likable character. Limitations caused by his "powers" make him difficult to deal with at times but over all he is smart and intuitive and generally likable. In the second book he is angry and irrational. He lashes out at people who don't deserve it while protecting other people who deserve to be punished. His decisions range from irrational to just stupid. He hardly seems like the same character. The plot is all over the map, and gave me the impression the author had no idea what he wanted to happen in the book. In the previous book the impressions Matt gets from the artifact tell a story with characters you want to hear more about. In this book the impressions from the artifact bounce around too much. Then when they finally settle on telling a story the character in the story are not very likable.

great writing. the movement of the characters and the story was excellent. I must say though I can't remember every getting so frustrated and upset w a fictional person. Mat Turner - and his defense of the Doc. was too much. and at too high a price. I wanted to reach in and kick him in the butt. I screamed multiple times in my head Mat u ass.... that being said. to elicit that reaction - great writing... looking forward to book 3

Couldn't Put It Down

This is book 2 of the series and being a history, metaphysical but, I loved it. Mystery, adventure, bad guys keep you guessing and Turner is growing up with his abilities. I really like the depth of all the characters and twists and turns.

It was a big let down.

Would you ever listen to anything by Michael Siemsen again?

What aspect of Chris Patton’s performance would you have changed?

He's a little smoother. His accents are inconsistent.

Was The Opal worth the listening time?

I was so eager since the Dig was innovative and exciting. This felt like a lot of somewhat irrelevant filler was used to increase page count. It was depressing, tedious, meandering, repetitive, and full of logic holes. It wasn't any fun, and there were too many nasty people, illogical behavior and decisions, and gratuitous deaths. The biggest part of the fun and fascination in the first book was the past history. In this book, even that was disjointed and dull. Also there were far too many pointless chases and fights and shuffling from place to place. Not to mention the utter downer of an ending.

the ending should have come at least an hour sooner and the characters seemed to all have personality transplants for the last third of the book. enjoyed the dig, this was mediocre and only just made sense. i didnt care about the opal characters at all either.