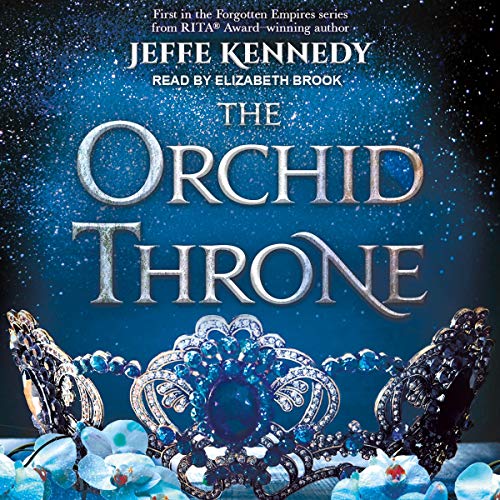 In the Forgotten Empires magic is forbidden, dreams are destiny, and love is the greatest power of all...

A PRISONER OF FATE

As Queen of the island kingdom of Calanthe, Lia will do anything to keep her people free - and her secrets safe - from the mad tyrant who rules the mainland. Guided by a magic ring of her father's, Lia plays the political game with the cronies the emperor sends to her island. In her heart, she knows that it's up to her to save herself from her fate as the emperor's bride. But in her dreams, she sees a man, one with the power to build a better world-a man whose spirit is as strong, and whose passion is as fierce as her own...

A PRINCE AMONG MEN

Conri, former Crown Prince of Oriel, has built an army to overthrow the emperor. But he needs the fabled Abiding Ring to succeed. The ring that Lia holds so dear to her heart. When the two banished rulers meet face to face, neither can deny the flames of rebellion that flicker in their eyes - nor the fires of desire that draw them together. But in this broken world of shattered kingdoms, can they ever really trust each other? Can their fiery alliance defeat the shadows of evil that threaten to engulf their hearts and souls?

What listeners say about The Orchid Throne

World building -Exciting variety to this world, many characteristics I’ve not imagined before or seen shades of in other books of this genre. Story: Straightforward yet so intriguing. Okay, one criticism is the opening chapter. I had no idea what was going on at first, I’ll admit. Once I “got my sea legs” as to what was going on in this World and how it worked, it all made sense from there on. Well crafted and interesting story: I really didn’t see a way out of a few spots, so that’s fun. I’m happy and also miffed at some particularly juicy and key revelations in last chapter...
The Series: Great beginning. This first book DID wrap up its own main story well, I now grudgingly admit... the surprising and so enticing tidbits of new revelations in the last chapter left me feeling cheated, though. I was sure there’d be another chapter or so. But I suppose it‘s smart of the author, but so frustrating to an avid reader. (I want to rant about the frustration of what has now become a standard of reading: the joys and sorrows of the Series. Aack. The cliffhangers at the end drive me nuts sometimes. Sigh. While I love that an awesome story I don’t want to end now can be extended through the format of series, it really is hard to wait months or a year for the next installment. It’s not like waiting a week as in tv. Sometimes I forget what happened, etc.
The Romance: I’m loving it so far. Enemies to allies basically. Two intriguing, deep characters. And best of all: some truly touching moments. All we romantic-hearted readers need are just a few authentically touching moments and we’re happy and hooked.
Warning: There is an explicit sex scene that to a mature person is well-done and honestly, surprisingly, wasn’t just about sex but actually a necessary piece for the developing relationship. Kudos to author for making it mean something important in the story! Honestly, I felt a little more shocked by the info that her handmaidens had been, ahem, servicing the Virgin Queen’s sexual needs so that she could maintain the very important protection of her virginity, a mandate of the evil bad overlord enemy dude, I think. But it sounded like it was no different a task than fixing her hair. Struck me so odd for some reason. But anyway, definitely not YA - not PG-13!
This is the first book I’ve read by Jeffe Kennedy, a fellow reader on Goodreads recommended her when I mentioned liking Grace Draven’s writing.
At first I couldn’t see similarities but now I can. Most similar are the strong characters: who somehow worm their way into your heart, each marked by an “unwavering faithfulness” to something: whether family, nation, code of honor, belief system, etc. Responsibility to one’s duty to others above all. Which I admire, perhaps because it’s a virtue not lauded in current culture. I don’t know.
Anyway, Kennedy’s characters and side characters are wonderful. There’s a bit more humor coloring them than Draven’s if I’m comparing which maybe isn’t fair, but it helps relieve the heaviness of whatever dire circumstances are going on.
Example: You simply must love the wizard Ambrose. He almost steals the show. We first meet him accompanying Conrí, once a prince in truth to a land now destroyed, but now the reluctant “King of Slaves” leading a Rebel army of escaped slaves from the horrifying and dangerous mines dragged to as prisoners of war. He seems to care for Conrí and Sonja, and the Euthalia, but who knows if he cares more about some mysterious prophesy he mentions once or twice. Who knows? That’s half the fun of him: mysterious, quirky, light-hearted as a child, whimsical, but then oddly really ancient sometimes too. He’s sure to be full of big surprises in the series.
All I know is I’m hooked.
Oh: forgot. Narration. Elizabeth Brook has a lovely voice, so easy on the ears and never once jolted me from the story with any errant pauses, etc. She deftly accentuated important moments as well. So she’s good.
HOWEVER, she doesn’t vary her voice much, either by tone or cadence or accent. So it’s hard to separate out the characters.
And since each chapter alternated between the personal “I” viewpoints of Conrí, the hero, and Euthalia, the heroine: it could get really confusing. I had to stop many and several times to remember whose head we were in when “I looked out at blah blah blah and sensed blah blah blah” could have been either of character.
One solution I recommend is adding a male narrator for Conrí, or more drastically the author could switch one character’s viewpoint to third person.
Two narrators can be bad though if you end up with two voices for a character. Like if female reads hero’s lines in her interpretation and then we hear male reader for same character. That’s very jolting. So only one voice per character please, and somehow make men and women sound different however you have to do it. This series might be hard as both characters truly are equally main characters. Usually one is more the real main character. And since it really is half Euthalia’s book and half Conrí’s, hmmm. Either switch narrator’s Ms. Brook needs to find some way to create variety, actually in all the characters, not just between male and female. Because everybody kinda sounded the same really. But she is an excellent reader, so I hate to criticize.
Few books perfectly align to great audiobooks: audio listeners need queues to a new speaker, easily done if narrator has distinct voice changes. But it’s also hard to know when characters are thinking to themselves, or speaking out loud. THAT can make a listener batty. This book was good about that, indicating good writing actually. All of which are obvious when physically reading a book.

This was a wonderful story and really set-up for the war that I hope is coming in next books. I thought it started off a bit slow but it picked up toward the end. I'm excited to see where this story goes.
The voice actor didn't really distinguish different voices until the end. So it was a bit hard to follow since the perspective changes each chapter and without an announcement with who is speaking it did get a little confusing.

The character tropes feel familiar but reimagined, all at the same time. Lovely pacing and world building, interesting romantic dynamic. Was looking forward to the second book, though it somehow lost all that the first installment had achieved and established, unfortunately, so enjoy this one while it lasts.

Couldn't get into in

Most of the time I couldn't tell which character was in play. There are two main characters both speaking in the first person. So there's no, 'he, she' etc. Then there's only one narrator. So moving from one character to the next was hard to identify. No change from male to female voice. So it was very frustrating and it meant I couldn't get into the story.