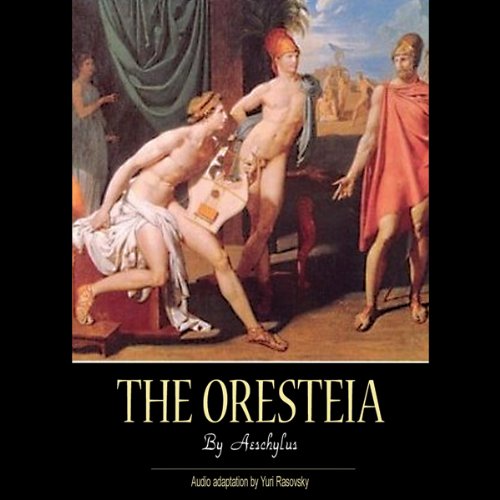 In The Oresteia, Aeschylus dramatizes the myth of the curse on the royal house of Argos. The action begins when King Agamemnon returns victorious from the Trojan War, only to be treacherously slain by his own wife. It ends with the trial of their son, Orestes, who slew his mother to avenge her treachery - a trial with the goddess Athena as judge, the god Apollo as defense attorney, and, as prosecutors, relentless avenging demons called The Furies. The results of the trial change the nature of divine and human justice forever.

An adaptation by Yuri Rasovsky, based on a translation by Ian Johnston.

Also included is an excerpt from Blackstone's dramatization of The Odyssey, in which Agamemnon's brother Menelaus learns of the events of The Oresteia from Proteus, the sea god.

What listeners say about The Oresteia

A Dramatic Trilogy for Both GODS and MEN.

Aeschylus' ability to weave and connect his tragedies seems second nature in today's world of sequels, trilogies, and Star Wars prequels, but Aescheylus' genius existed both in the original form and the brilliant substance of his surviving plays. I can understand how Swinburne could call the Oresteia trilogy the "greatest spiritual work of man." The Oresteia is at once brilliant, creepy, and infinitely tragic (only family dramas can be so damn full of pathos). As I was reading it, I was constantly thinking of the influences the Oresteia had on everyone from Shakespeare (think Lady Macbeth) to our current crop of TV police procedurals.

This production is based on the Ian Johnston translation and is produced by Yuri Rasovsky. I'm partial to Johnston's work: he also did the outstanding verse translations of Homer recently recorded by Naxos (and available on Audible). This is more than a simple "staged reading." Rasovsky, an old hand at audio theater, pulls out the stops: music and sound effects are used throughout, and I found the choruses, always a dilemma in modern stagings of Greek drama, especially effective. (Oh, and the acting is pretty good too!) Well done, moving, and consistently interesting.

This audiobook appears to be a recording of a classic play. I would love to hear it but the quality of the recording is such that the decibel volume rises and falls so dramatically that one moment it provides an assault on your ears that is so loud and painful you immediately have to turn the volume down only to soon hear a timid whisper and consequently turn it back up. The cycle was repeated so often in the first 20 minutes of listening that I couldn't stand it any longer.

If better time can be spent..

What did you love best about The Oresteia?

..than a walk with this production taking desultory interludes from this magical inner theater to enjoy the lovely surroundings I know not of it

What was one of the most memorable moments of The Oresteia?

there are so many, but if forced to choose one, I would say Cassandra's scene for Agamemnon, The murder of Clytemnestra for The Libation Bearers, and, of course, the Trial in Eumenides.

Great recording of an uneven trilogy

I rated the story lower because I don't think these plays have all aged equally well. The first play of the trilogy (Agamemnon) has some really great drama and poetry, but the final play (The Eumenides) is mostly an Ancient Greek civics lesson. Interesting from a historical perspective, but not an engaging piece of literature.

performing such a magical tragedia, with so well style is worth listening repeatedly.
recommended for everyone!

I felt as if I was in Ancient Greece

Very realistic. Good portrait of theater at that time. Enjoyed it and would recommend it.

This is a very good reading of the plays - the director uses lots of music and sound to the reading to give it the feeling of a full performance. The translation is engaging and contemporary. Some of the actors are a bit hammy and seem to enjoy the sound of their own voices too much, but otherwise this does a great job of communicating the power of the plays.

audio quality was poor, garbled, hard to listen to. A great story deserves better. Can't believe audible offers only this

This is a superior, professional, accessible, authentic dramatization. The quality of American actors' enunciation and understanding of the text is top notch. The play was performed with a high level of emotion and contrast. Sound effects and music added well to the interest.

My one moment of disappointment was during the middle play - "The Libation Bearers". At one point. the three characters (Electra, Orestes, Chorus) began all speaking their respective, different lines simultaneously. You cannot follow all three speeches at once.

Presumably, the producer thought that the speeches were too long and repetitive or that such a technique would have an interesting effect and communicate something more than the bare text with all the time necessary for consecutive recital. That is fine, and may accurately judge the patience of the audience generally, but I wanted to hear everything Aeschylus had to say.

Paves the way to the text

The Oresteia is a very complicated yet catching tragedy. It is a deviation from Greek tragedies such as Oedipus, and this makes it both interesting and difficult to understand the challenges and struggles between furies and olympian Gods marks a transition in Greek mythology.

This Hollywood version of the Oresteia has the advantage of using colourful voices and effects in order to help the listener to imagine the different kinds of beings who are involved in the play viz. humans, Gods, and Furies.

Of course the Hollywood version of the Oresteia cannot replace the text itself and it is highly recommended to the philhellenics to read the text as well. But this audio-play will certainly ease the readers way to the text, which prior to it might seem very difficult to understand.

Lame translation and weak if dogged performance. Can this be one of the masterworks of Greek drama?

The translation does not match the audio. Putting this quibble aside, it's a great play, and this one was performed well.