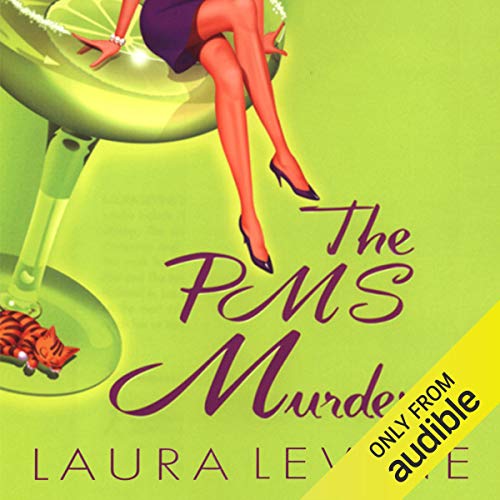 On the frontlines of the battle of the bulge, otherwise known as trying on bathing suits in the communal dressing room at Loehmann's, freelance writer Jaine Austen makes a new friend - a wannabe actress named Pam - and gets a new job: sprucing up Pam's bare-bones resume.

Their feeling of connection is mutual, so Pam invites Jaine to join The PMS Club - a women's support group that meets once a week over guacamole and margaritas.

But joining the club proves to be more a curse than a blessing for Jaine. Though she is warned that Rochelle, the hostess, makes a guacamole to die for, Jaine never takes the warning literally. Until another PMS member, Marybeth, drops dead over a mouthful of the green stuff after confessing she is having an affair with Rochelle's husband.

While Rochelle and her husband are the obvious suspects, everyone at that night's meeting is under suspicion, including Jaine. So, instead of dishing dirt with The PMS Club, Jaine has to dig up dirt on the surviving members. And soon it becomes clear: someone in this club thinks getting away with murder should be a privilege of membership. . .

What listeners say about The PMS Murder

This is the best book of the series so far. It is funny, witty and clever. Jane takes after her father in that they both get involved in cringe worthy but funny situations. I laughed out aloud as I listened to this book. The murder mystery developed slowly but picked up and moved fast. There were lots of red herrings to prevent guessing the killer. The narrator did a good job with all of the voices. I would recommend Laura Levine to anyone who like cozy mysteries. I'm off to download the next book in the series.

I love this series! The author is very clever, and always has some great twist. The characters are always so unique and have distinct personalities. The main character is very believable and easy to relate to. Brittany Pressley is a fantastic narrator. She is great when reading the sarcastic remarks, and does well giving the characters distinct voices. Humor, mystery, and a cat - can't go wrong!

The yummiest kind of brain candy!

I consider this book (and series) &quot;brain candy,&quot; akin to the whole Hamish MacBeth series, but what a delightful read when you want something with a little whodunit in it that will also make you laugh out loud. The protagonist, Jaine, is utterly charming and hapless, and the cast of characters that run throughout this series provide depth and comedy without appearing wooden or stereotypical. In my reading so far (I have almost all of Levine's books), there is always a murder, plenty of antics, and a few entertaining screwballs. This book won't give you high drama, particularly if you read the series (it's not always obvious who the &quot;bad guy&quot; is, but you can bet that they will be found out and the plot will be wrapped up in a neat little bow), but although some of the shenanigans seem a little formulaic they are written (and read) in a way that come across as hilarious anyway. Pressley is the perfect narrator for the voice of Jaine, and she also delivers on all of the other characters (male and female) in a way that is believable yet also maintains the humor of the situation. I highly recommend this book if you are looking for a series of light-hearted cozy murder mysteries.

another great one in the series. I am starting to figure these out way before the end but they are so much fun. Jaine joins a PMS club just in time for one of its members to be murdered. unless Jaine can solve the case,, she will lose her dream job. so who did it? everyone but her has a
motive. read and fond out.

1) Lovable heroine
2) After 3 books, I've come to really appreciate the narrator's performance of each character.
3) Storyline is an easy read without being half-baked.
4) Writer comes up with some pretty original and witty lines, found myself laughing despite my initial detachment from narrator's performance. (Now I like her).

Have you listened to any of Brittany Pressley’s other performances before? How does this one compare?

No. At first I thought her performance was over-the-top but now I like her and appreciate how it makes the heroine more likable.

You just have to love Jaine Austen. This series is one of my favorites. They are light and fun, and witty. Please get the rest of the titles from this series on Audible!