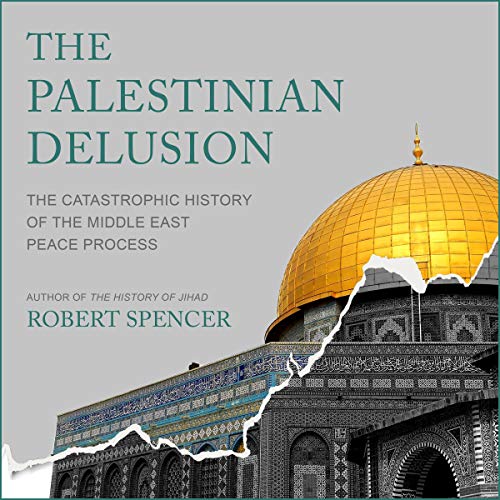 Every new American president has a plan to bring about peace between the Israelis and the Palestinians, and every one fails. Every "peace process" has failed in its primary objective: to establish a stable and lasting accord between the two parties, such that they can live together side-by-side in friendship rather than enmity. But why? And what can be done instead?

The Palestinian Delusion is unique in situating the Israeli/Palestinian conflict within the context of the global jihad that has found renewed impetus in the latter portion of the 20th century and the beginning of the 21st. Briskly recounting the tumultuous history of the "peace process", Robert Spencer demonstrates that the determination of diplomats, policymakers, and negotiators to ignore this aspect of the conflict has led the Israelis, the Palestinians, and the world down numerous blind alleys. This has often only exacerbated, rather than healed, this conflict.

The Palestinian Delusion offers a general overview of the Zionist settlement of Palestine, the establishment of the State of Israel, and the Arab Muslim reaction to these events. It explores the dramatic and little-known history of the various peace efforts-showing how and why they invariably broke down or failed to be implemented fully.

What listeners say about The Palestinian Delusion

This book lays out in cold hard facts, regarding,history, religion and money, why the Conflict between Israel and the Palestinian Arabs will not be settled in our lifetime. It highlights not only the delusion of the Palestinians but more importantly the delusion of those Westerners who believe this conflict can be settled where one side inculcates hate and death towards the other.When Arabs and Muslims stop teaching Jew hatred and agree to abandon their goal to destroy Israel there could be peace.However this is unlikely. All the talk and duplicity by the Palestinian Arabs is worthless.Any concessions by Israel, even a Palestinian state,is nothing but part of the ultimate goal to destroy Israel as the only Jewish state in the world.

The “Palestinian People” is one of great lies of the 20th & 21st century. Robert Spencer has provided an excellent history as well as outstanding bibliography to vindicate his thesis. BRAVO!

He hit almost all the right points a truly must read to understand what Israel and the world is really up against.

Must read....excellent. Great writing. A truly outstanding summary and truthful historic perspective on Israel, peace and the failure of negotiating with jihadists dedicated to Israel’s destruction. Anyone interested in the Middle East, Israel, Palestine, etc., will find this a fantastic read. Well done. Desperately needed truth telling.....

Keep up the good work and continue talking with Peter Boyles and other American Patriots.

An other excellent book by mr. Spencer. To be informed one must read his books. The narrator was a joy to listen to. Thank you!

Most factual and historical book I’ve ever read

As usual, Robert Spencer basis his books on historical facts. He hits the nail on the head with this book. Sad that the Palestinians don’t want peace but to drive the Israelis out of their ancestral homeland. Jerusalem is not even mentioned once in the Quran so why is it so important to them? Their third holiest site? Jews have ONE holy site. That is the land of Israel, for now and forever.

Why is there trouble in the peace process?

This book is for understanding why there is trouble in the Middle East peace process. In order for any goshi ation between 2 parties to be successful, each party must accept the legitimacy of the other party and bargain and make accommodations accordingly.

The author explains the primary challenges to the peace process being the history of deception, the ideological basis for palestinian Islam, and the willful ignorance of those outside parties that try to broker the peace.

The book has strong citation and it is obvious that the repetition of the same problems can reveal the frustrating nature of the Middle East peace process.

If a person knows nothing of the Middle East peace attempts karma than this work could be a nearly standalone effort.

Difficult to review this sort of book

A very interesting, well written, well read, well researched but ultimately one sided take on a complicated topic. It cries out for and deserves a riposte.