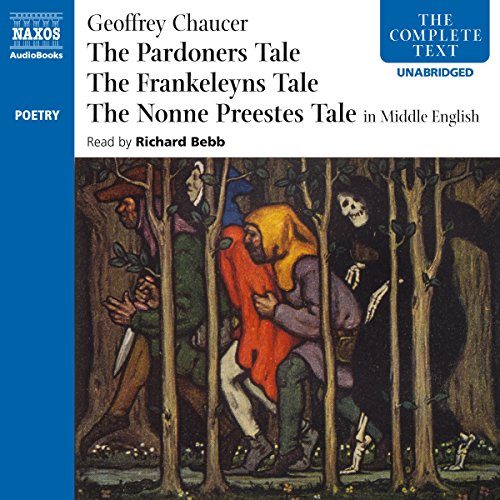 Three tales from The Canterbury Tales, read in the original Middle English by Richard Bebb under the direction of Britain's foremost Chaucer scholar, Derek Brewer.

"The Pardoner’s Tale" is surely among the more scathing and ironic entries from Geoffrey Chaucer’s eponymous Canterbury Tales. Here, the medieval bard takes on moral and spiritual hypocrisy. Performer Richard Bebb is stunning, his mellifluous Middle English brogue betraying wry warmth and playful humor as he relates this tale of religious hucksterism. To be sure, Chaucer’s language is unlikely to be readily comprehended by the casual listener: indeed, part of Bebb’s appeal lies in his ability to extract emotions and atmospherics from the melodious, if archaic, verse.

Well, I am not versed in speaking Middle Englisch (English is not even my mother tongue) nor am I student of Medieval languages. Therfore I cannot even say if this reading of Chaucer is correct or not... But I can say that I thoroughly enjoy it. Just love the rhythm, the rhymes and that wonderful language and to me the reading sounds really well done.
And I am definitely going to read the Canterbury Tales! Should have done that long before...

Because I am not versed in speaking Middle English,the book was total gibberish to me since it was read in Middle English. I doubt that anyone outside of acedeme could comprehend what was being said. Sorry I didn't know. Sorry I wasted a credit.

Would you consider the audio edition of The Pardoner's Tale to be better than the print version?

I find astonishing that many poor reviews that I've read on various classic works of literature are due to stupidity on the buyers part. In this example it states clearly, on the description, that this is in Middle English and the sample is also in Middle English. Duh! However the second half is in Modern English. So a poor review in that regard is wholly unfair and should be removed. The writer of the review should also be fined for being a trolling dumbass.