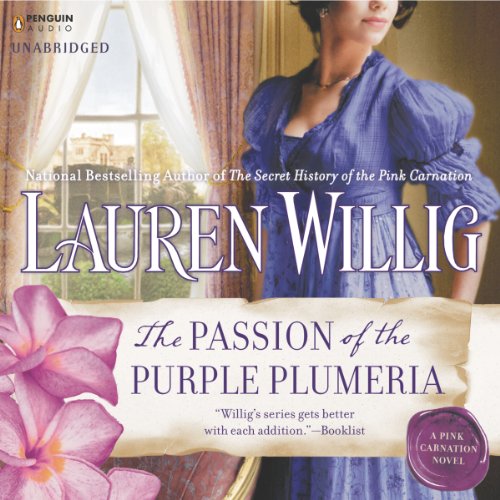 The Passion of the Purple Plumeria

Lauren Willig’s Pink Carnation novels have been hailed as "sheer fun" and "charming". Now she takes listeners on an adventure filled with hidden treasure and a devilishly handsome English colonel....

Colonel William Reid has returned home from India to retire near his children, who are safely stowed at an academy in Bath. Upon his return to the Isles, however, he finds that one of his daughters has vanished, along with one of her classmates.

Because she served as second-in-command to the Pink Carnation, one of England’s most intrepid spies, it would be impossible for Gwendolyn Meadows to give up the intrigue of Paris for a quiet life in the English countryside - especially when she’s just overheard news of an alliance forming between Napoleon and an Ottoman Sultan. But, when the Pink Carnation’s little sister goes missing from her English boarding school, Gwen reluctantly returns home to investigate the girl’s disappearance.

Thrown together by circumstance, Gwen and William must cooperate to track down the young ladies before others with nefarious intent get their hands on them. But Gwen’s partnership with quick-tongued, roguish William may prove to be even more of an adventure for her than finding the lost girls….

Miss Gwen is THE BOMB!

If you could sum up The Passion of the Purple Plumeria in three words, what would they be?

What does Kate Reading bring to the story that you wouldn’t experience if you just read the book?

Excellent narration. Her accents and character differentiation are fantastic. She is one of the best.

If you could take any character from The Passion of the Purple Plumeria out to dinner, who would it be and why?

I was so sad when the book ended. I can't decide if I want to listen to this book again or start from the first book in the series and work my way through them all again. I thought Ms. Willig wrote a wonderful love story for Miss Gwen.

I didn't think that Eloise's story was as strong as it was in some of the previous books, but I was so happy with Gwen's story that I didn't mind the weakness or real lack of a strong storyline for Eloise.

If you've not listened to or read the other books in the series then Miss Gwen's attitude and seemingly harsh manner may not be understood. Beneath her gruff exterior lies a soft-hearted woman.

Lauren's got her groove back!

The previous book in the Pink Carnation series was kind of forgettable (I don't even remember which one it was), but since I have thoroughly enjoyed most of them, I was very excited to get The Passion of the Purple Plumeria. Am I glad I did! It's right back up there with her first books in humour, intrigue, and soppiness, so I had my fill of a terrific romance, lots of spy stuff, and plenty of laughter. I didn't want it to end--and it sounded as if this may be the end of the series, so I was a little sad at the end of the book...well, ok, a lot sad, but I was glad that it was so enjoyable.

The narration...for the first hour or so of the book I had issues with the narration--it seemed shrill and slow; and very enunciated (which can be annoying)--but by the next night I had grown used to it and by the end of the book I felt that Kate Reading did a wonderful job, all in all.

If you have EVER enjoyed Lauren Willig's books, don't miss out on this one! It was a rollicking good time! And so scandalous!

Back to the Pink!

I found this one of the best in the series. I found some of the other flowers a bit tedious, but this character is well defined and the humor really shines through.

I really enjoyed this listen,

I have all of Lauren Willigs books so far and I must say I was not disappointed in this listen at all. This was not as fast paced as some of the others in this series yet I found it fun and entertaining yet I am hoping Lauren will have more story lines like the pink carnation were I could not put my eye pod down.

Good, fun and it flows.

Really enjoyed the insight into the Gwen Meadows character and the humorous way it is handled. I found myself smiling more that once. Lauren Willing is one of my favorite authors. Lots of interesting twists and turns within the outrageous story line.

YAY MISS GWEN GETS HER STORY!!!

I fell in love with prickly Miss Gwen the moment I met her in the first Pink Carnation novel, so I gobbled this one up as soon as it was released. It was nice to finally get a bit of Gwen's backstory as an explanation of why she behaved the way she did--and her hero, Colonel William Reid, is her perfect match! Each chapter is headed by excerpts from Miss Gwen's novel, which I would absolutely read in it's entirety should it ever be available, ha ha. This particular title has become a yearly re-read for me, as have the other titles in this series. Lauren Willig is brilliant and Kate Reading scores with all of the characters herein(there are A LOT of them) by giving each and every one a distinct voice that I never tire of listening to. Thank you Lauren and Kate for this highly entertaining novel!

I thoroughly enjoyed this book! It was back to the exciting plots of the first several books in the series. The narrator is fabulous!

All of her books in this series have been wonderful! Very diverting. I highly recommend it.

Wonderful story. Kate Reading is a fabulous narrator. I have loved all of the books in this series, but must admit the last few were not my overall favorites. This once again got back into the lively humour and wit you expect and (finally) had a much stronger storyline. I did enjoy the last 2 stories in this series but this one was in my opinion much better. I felt like it has a lot in it that ties the characters together. Can't wait for the next book.

What was one of the most memorable moments of The Passion of the Purple Plumeria?

There were so many but one of my favorite is when Gwen lets her passion go with William.

This was a wonderful story about one of my favorite characters in this series Gwen is a spitfire and she is finally getting the pot of gold at the end of the rainbow,