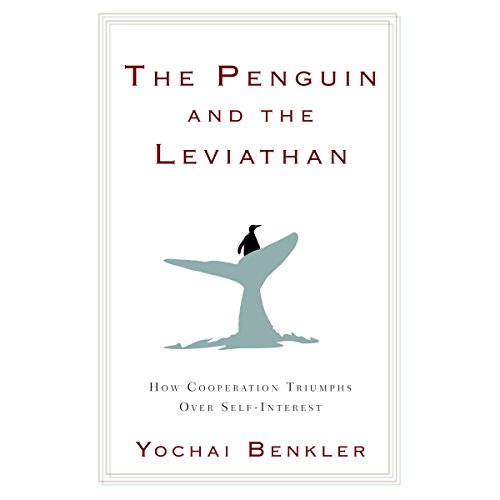 The Penguin and the Leviathan

What do Wikipedia, Zip Car’s business model, Barack Obama's presidential campaign, and a small group of lobster fishermen have in common? They all show the power and promise of human cooperation in transforming our businesses, our government, and our society at large. Because today, when the costs of collaborating are lower than ever before, there are no limits to what we can achieve by working together.

For centuries, we as a society have operated according to a very unflattering view of human nature: that, humans are universally and inherently selfish creatures. As a result, our most deeply entrenched social structures – our top-down business models, our punitive legal systems, our market-based approaches to everything from education reform to environmental regulation - have been built on the premise that humans are driven only by self interest, programmed to respond only to the invisible hand of the free markets or the iron fist of a controlling government.

In the last decade, however, this fallacy has finally begun to unravel, as hundreds of studies conducted across dozens of cultures have found that most people will act far more cooperatively than previously believed. Here, Harvard University Professor Yochai Benkler draws on cutting-edge findings from neuroscience, economics, sociology, evolutionary biology, political science, and a wealth of real world examples to debunk this long-held myth and reveal how we can harness the power of human cooperation to improve business processes, design smarter technology, reform our economic systems, maximize volunteer contributions to science, reduce crime, improve the efficacy of civic movements, and more.

"For the last several centuries, many of our deeply held beliefs have been shaped by the view that human beings are fundamentally motivated by self-interest. In his latest work, Benkler ( The Wealth of Networks) challenges this long-held view, asserting that the spirit of human cooperation is stronger than selfishness a view that will likely revolutionize business, economics, technology, government, and human interaction in the future... His pertinent examples bring his ideas to life." ( Publishers Weekly)
"Yochai Benkler is the smartest thinker we have on the effects of the internet on society. In The Penguin and the Leviathan, he lays out the ways that larger, looser, freer collaborations are transforming how we think about work and about the value we give and get from each other." (Clay Shirky, bestselling author of Here Come Everybody and Cognitive Surplus)
"Benkler speaks the truth on every page -- presenting a brighter vision of human nature that we keep insist on denying for no good reason." (Tim Wu, bestselling author of The Master Switch and professor, Columbia Law School)

What listeners say about The Penguin and the Leviathan

I really liked this audio book. The narration is fantastic. The author explains how humans have evolved a culture of cooperation. Growing up myself in the 'me generation', this book overturns my long held beliefs. The author tells some interesting anecdotes and explains some great scientific experiments. What does it all point to? Groups! The author looks at facebook, twitter, the economy, genes, animal behavior and more. Now I see why face to face contact is necessary in business meetings, why wikipedia has unpaid contributors, and how picking something at random can be seen to be fair. I highly recommend this book for some wonderful listening that will really make you think.

Great inspiring book. Great to hear it on Audible

If you could sum up The Penguin and the Leviathan in three words, what would they be?

Which character – as performed by Marc Cashman – was your favorite?

If you could give The Penguin and the Leviathan a new subtitle, what would it be?

First listening with Audible. Was a great experience. Loved the different play speeds and android app. It's a little expensive though. And also I'd love to download an mp3 for being able to play it while swimming with my water resistant mp3 player. Live long and prosper. and do bubbles.

In my top 5 favorite books!

In spite of not being listed as a book on management, it is one of the two best books on management and humanity that I have read.
Liars and Outliers: Enabling the Trust that Society Needs to Thrive was the other.

I often reference this book as it had a profound impact on me.
I believe it should be required reading for anyone in IT security and everyone in management.

It has helped me in my relationship with other humans.
It can give one hope in the human race.

I highly recommend it!

I was also very happy with Audible narration.

This book is one of the reasons that I actually bother to write reviews of books here.