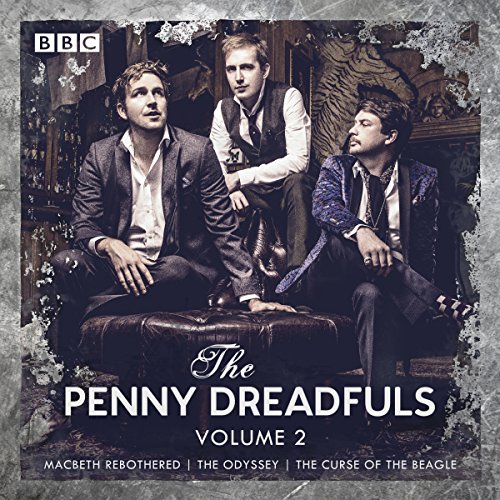 Comedic tales of adventure based on historical events.

The Penny Dreadfuls - Humphrey Ker, David Reed and Thom Tuck - are a comedy trio who specialise in retelling historical events in their own inimitable way. In these riotous revisionist plays, they present alternative takes on three famous tales, ably assisted by guests including Margaret Cabourn-Smith and Lolly Adefope.

'Macbeth Rebothered': It's the Scottish play but not as we know it. The Penny Dreadfuls present a rebooted version of the classic story that paints the noble King in a very different light. Starring Greg McHugh as Macbeth and Susan Calman as the Narrator.

'The Odyssey': The Penny Dreadfuls' take on Homer's tale of Odyseuss' epic journey home from the Trojan Wars and the incredible monsters and enchantress he encounters en route. Starring Robert Webb as Odysseus.

'The Curse of the Beagle': In 1831 a 22-year-old Charles Darwin set sail on HMS Beagle for a five-year voyage that changed the course of his life. He later published his stories of the trip, but in this reimagining The Penny Dreadfuls uncover the untold story that Darwin kept to himself.

What listeners say about The Penny Dreadfuls: Collection 2

I love British comedy but this radio comedy was so funny I was laughing for hours! I haven’t laughed that much in along time! I wish that all audible readers played parts like the actors on these Penny Dreafdulls.

finally got some penny dreadfuls!

clear argument for youtube uploads here! have loved these peeps for ages and so good to have them to listen to! definitely recommend! other stuff i like for recommendations reasons: elvenquest, bleak expectations, anything by john finnemore...

Lose yourself in the laughter whilst basking in these brilliantly reimagined tales. Fantastic voice cast that bring it all together beautifully.

The Penny Dreadfuls are back and this time they’re putting their wits to the test retelling and reinventing Macbeth as a benevolent and skilled politician, exposing Odysseyus as the ego maniac and callous party bore we all knew him to be and have rediscovered the journal of Darwin’s gap year.
Always brilliantly written and cast, a hilarious listen.

Always been a fan of the Penny Dreadfuls, they never disappoint , just brilliant!

I had only ever heard The Odysy (second story) before and this was by first time hearing the Macbeth Rebothered and The Curse of the Beagle. What can I say other than these guys are so funny. I laughed throughout. I would be put off listening the these in public as I would find it hard to suppress the laughter.
I feel that they are definately they sort of listening that you could play again as and when the mood suits.
I’ll certainly be buying volume 1 next.

The Penny Dreadfuls deliver yet another superb performance. Hurry up and make some more please!