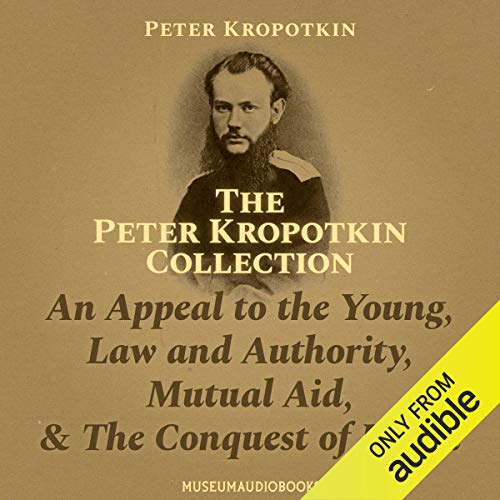 Pyotr Alexeyevich Kropotkin (1842-1921) was a Russian activist, writer, revolutionary, scientist, economist, sociologist, historian, essayist, researcher, political scientist and philosopher who advocated anarcho-communism. Kropotkin was a proponent of a decentralised society based on voluntary associations of self-governing communities and worker-run enterprises.

Among his many books, pamphlets, and articles are: An Appeal to the Young (1880) in which he seeks to prompt individuals to enter into resistance struggles, emphasising the power of educated youth to alleviate the suffering of the poor; Law and Authority (1886) in which the idea of laws, lawmakers and lawbreakers are discussed; The Conquest of Bread (1892) in which he proposed a system of economics based on mutual exchanges made in a system of voluntary cooperation; Mutual Aid: A Factor of Evolution (1902) in which he argued that it was an evolutionary emphasis on cooperation instead of competition in the Darwinian sense that made for the success of species, including the human.

What listeners say about The Peter Kropotkin Collection

Great, save for the first narrator

While 99% of this was great, the very first narrator (only for the shorter essay "An Appeal to the Young") was... not very good. Sounded like a high schooler with social anxiety reading cue cards in front of an auditorium. It didn't have the oomph behind it that such a speech needs. It should be more like Aragorn's "rise, men of the West" speech from Return of the King, but instead I got "Oh the Places You'll Go"...

Don't let that turn you off to the book as a whole though. It was amazing.