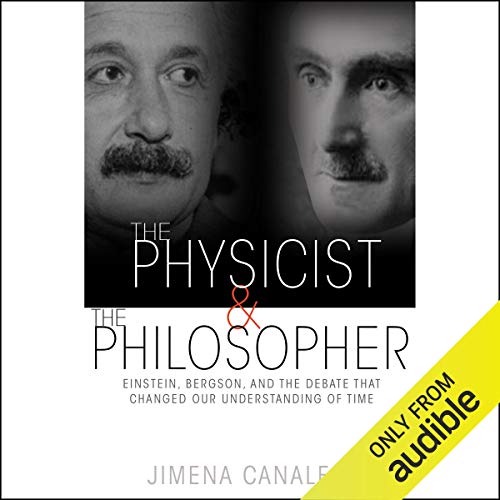 The Physicist and the Philosopher

On April 6, 1922, in Paris, Albert Einstein and Henri Bergson publicly debated the nature of time. Einstein considered Bergson's theory of time to be a soft, psychological notion, irreconcilable with the quantitative realities of physics. Bergson, who gained fame as a philosopher by arguing that time should not be understood exclusively through the lens of science, criticized Einstein's theory of time for being a metaphysics grafted onto science, one that ignored the intuitive aspects of time. The Physicist and the Philosopher tells the remarkable story of how this explosive debate transformed our understanding of time and drove a rift between science and the humanities that persists today.

Jimena Canales introduces listeners to the revolutionary ideas of Einstein and Bergson, describes how they dramatically collided in Paris, and traces how this clash of worldviews reverberated across the 20th century. She shows how it provoked responses from figures such as Bertrand Russell and Martin Heidegger and carried repercussions for American pragmatism, logical positivism, phenomenology, and quantum mechanics. Canales explains how the new technologies of the period - such as wristwatches, radio, and film - helped to shape people's conceptions of time and further polarized the public debate. She also discusses how Bergson and Einstein, toward the ends of their lives, each reflected on his rival's legacy - Bergson during the Nazi occupation of Paris and Einstein in the context of the first hydrogen bomb explosion.

The Physicist and the Philosopher reveals how scientific truth was placed on trial in a divided century marked by a new sense of time.

Nice intersection between Science and Philosophy

Einstein's block universe takes Time out of the universe. Time after Einstein can be said to be an illusion, time is that which exist so that everything doesn't happen at once. Henri Bergson, probably the most famous 20th century philosopher that most people have never heard of, but almost everyone has heard of his arguments ('elan vital', 'creative evolution', 'intuitive time'), wanted to put man and his intuitive understanding of time back into the center stage of the universe.

If I were to write a movie where the protagonist was going to time travel, I would have her reading a copy of this book. Time is not what most of us think it is and by seeing if from the perspective of these two great minds adds to my appreciation for the nuances involved.

I have a hard time finding new books in science or philosophy which are not just a rehash of other recent books that I have already read. This author manages to talk about her subject matter in a surprisingly refreshing manner. She gives the reader the connections and the nuances involved in the story. Einstein did make the 'original sin' (his words) of entwining the absolute speed of light with a physical clock. That is the ultimate problem that Bergson has with Einstein, the physical understanding of time with the universe's understanding of Time. Einstein (and as science always does) will mix the concrete (empirical) with the abstract (intellectual) and develops a theory about reality.

The author draws the connection with Bergson's view point to Husserl's Phenomenology, to Heidegger's Being (Daisen), and to the start of the Existentialists. I did not realize, for example, that Heidegger's 'Being and Time' was such a strong reaction against Einstein. That Heidegger wanted to put the 'becoming' back into the world from the being of being (Daisen) because Time (that's 'time' with a capital 'T") was being taken out of the world.

The book not only equally considers the science and the philosophy at the period under consideration it also gives a subtle discussion about the nature of science. Copernicus makes the sun the center of the solar system, but does that mean it's only that because it makes the mathematics easier to play with or is it really that way. Einstein takes out a universal time by taking out simultaneity and replacing it with the speed of light as a constant and a physical clock (and the equivalence principle, where inertia mass is equivalent to heavy mass, but the author seldom talks about gravity).

Einstein never accepted quantum physics even though he is one of its principal creators because of his discovery of the photoelectric effect and Brownian motion. His General Theory is based on continuity. Bergson's approach is more discrete thus more attuned with quantum physics. The author points out how in some ways the science of quantum physics started going towards Bergson.

I really appreciate an accessible book that takes me way beyond the current popular science and philosophy books and not just a rehash of things I already know, and therefore I would recommend this book for those who love the intersection between science and philosophy and like to be challenged with a story that has not already been told in such depth.

Enjoyable History of Physics and Philosophy

I'm about half way through and I find this book a nice mixture of history, physics, and philosophy. It's discusses, in a fairly unique way, ideas and topics at the intersection of physics, philosophy, scientific, cultural, and some politics, etc.

It's also interesting that no one today seems to know Bergson, outside of philosophy. My "Companion to the Philosophers" encyclopedia has a brief summary of Bergson, but not a word about "Duration and Simultaneity", nor anything about him and Einstein.

I'm not finding Bergson that interesting, my interest lies in this period of time when the Theory of Relativity was ascending, how people were reacting to it and/or taking sides. It is enjoyable because it mixes so many interesting ideas and people in the story. It is definitely worth a listen. A teeny pet-peeve, just a geek's complaint: the narrator refers to the Perihelion of Mercury shifting in "inches" when it is clearly arc-seconds. This is forgivable of course, but it always bugs me that narrators never seem to have decent scientific facility! Otherwise the narrator is fine.

This is a unique and different perspective on a well-covered time period. If you're a fan of the development of Relativity or this period, it will be of interest. It's not technically deep from a physics point of view, though it is appropriately in-depth where needed. For those who like a multi-disciplinary multi-perspective approach to these topics, this is a very enjoyable book.

Excellent book on Einstein’s defense of Relativity in France

This book is a refreshingly authentic book about Einstein’s philosophical defense of relativity on a qualitative basis. I’ve read many books about Einstein that don’t offer much in terms of unknown history or original insights. This book delivers on both. Written by a History of Science Harvard Ph.D this effort is first rate. If you like Peter Galison this book is for you. Five stars.

This has changed the way I see the way modern history works. That a hugely respected and influential thinker like Bergson should just disappear from public consciousness in less than a lifetime is astonishing.

This is a must-read.

History of the Universe

Block Universe where past present and future coexist versus the Trascendental Eternal Now where the Universe always Was Is and Will be.(no Big Bang)

Poor Einstein who had to deal with this pompous french pseudo intellectual who was fighting relativity theorie with 'psychological time' which does not slow down and telepathy which is not limited by the speed of light.
This book is way to long and celebrates this pompous arm chair philosopher calling Bergson "the " philosopher.

The author's treatment of the subject was mind blowing, covering everything from the personal psychology of these two men, to the social history of the debate, to the global politics, and finally the science and metaphysics involved in the questions swirling around the debate. What debate? The nature of space and time, and how we come to know that nature. It's a debate as old as Parmenides and Heraclitus, and thier names even pop up in the later chapters.

The reader was clear and well paced, but there were a number of bad edits, and the reader really struggled with German pronunciations. Which is unfortunate, since he had to read the titles of numerous scientific publications by Einstein, Reichenbach, and others, as well as the names of several German newspapers and organizations.

Despite this, I would still strongly recommend the book to the layman looking for clarity on one of western civilization's most pressing and enduring philosophical questions.

A fascinating insight into the nature of time

I was about to discount Bergson philosophy this book changed my mind. The reading is very good loves the French pronunciation