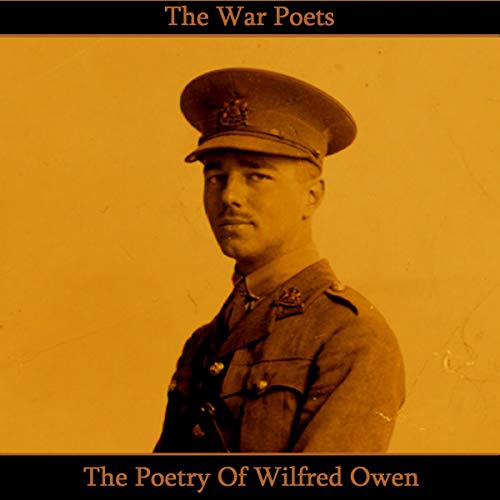 The Poetry of Wilfred Owen

Wilfred Owen was born on 18th March 1893 at Plas Wilmot, near Oswestry in Shropshire, the eldest of four children.

His mother's strong Anglican views passed through to Wilfred, and the Bible, along with books on the Romantic poets, particularly John Keats, were particular favourites and contributed to his initial devotion to the church.

In 1913 Wilfred began work as a private tutor teaching English and French at the Berlitz School of Languages in Bordeaux, France, and later with a family.

With the dark shadows of war beginning to envelop Europe, many prepared for a future in the services. Wilfred did not rush to enlist, but he did return to England.

On 21st October 1915, Wilfred enlisted with the Artists' Rifles Officers' Training Corps. For the next seven months, he trained at Hare Hall Camp in Essex. On 4th June 1916 he was commissioned as a second lieutenant in the Manchester Regiment.

Initially, he was discouraged by his troops' behaviour, holding them in contempt for their loutish ways. Writing to his mother, he described them as 'expressionless lumps'.

The war now was to change his life dramatically in a series of sharp, traumatic shocks: he fell into a shell hole and suffered concussion; he was blown high into the air by a trench mortar and spent several days lying out on an embankment in Savy Wood amongst (he thought) the remnants of a fellow officer.

Soon afterwards, Owen was diagnosed as suffering from neurasthenia, or shell shock, and sent to Craiglockhart War Hospital in Edinburgh for treatment. It was while recuperating here that he met and befriended fellow poet Siegfried Sassoon. This encounter was to again transform his young life.

In November he was discharged from Craiglockhart and judged fit for light regimental duties. He spent a contented and fruitful winter in Scarborough and in March 1918 was posted to Ripon, where he composed a number of poems, including 'Futility' and 'Strange Meeting'. His last birthday, his 25th, was spent quietly at Ripon Cathedral.

At the height of summer 1918 Owen returned to active service, although he might have stayed on home duty indefinitely.

On 1st October 1918 Owen led units of the Second Manchesters to storm enemy strong points near the village of Joncourt. For his courage and leadership there he was awarded the Military Cross, an award he had always sought in order to justify himself as a war poet.

Germany was now struggling to contain the Allies' advance, and the end of the war was in sight. However, Wilfred would not live to see Europe at peace. He was killed in action on 4th November 1918 during the crossing of the Sambre-Oise Canal, one week before the Armistice.

His mother received the telegram informing her of her son’s death on November 11th, Armistice Day, as the church bells were ringing out the end of hostilities.

What listeners say about The Poetry of Wilfred Owen