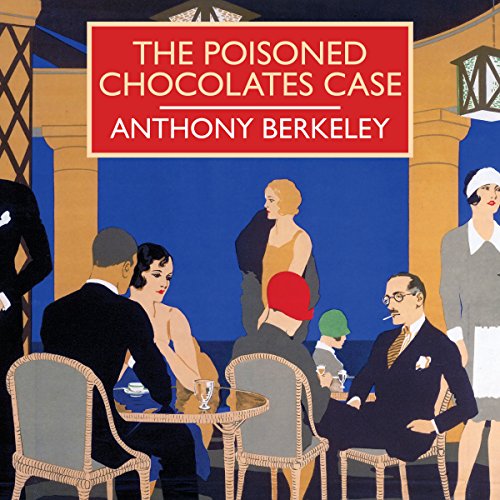 Graham and Joan Bendix have apparently succeeded in making that eighth wonder of the modern world, a happy marriage. And into the middle of it there drops, like a clap of thunder, a box of chocolates.

Joan Bendix is killed by a poisoned box of liqueur chocolates that cannot have been intended for her to eat. The police investigation rapidly reaches a dead end. Chief Inspector Moresby calls on Roger Sheringham and his Crimes Circle - six amateur but intrepid detectives - to consider the case.

The evidence is laid before the Circle, and the members take it in turn to offer a solution. Each is more convincing than the last, slowly filling in the pieces of the puzzle until the dazzling conclusion.

What listeners say about The Poisoned Chocolates Case

“It’s an odd thing,” Bertie Wooster once observed, “but however much of an aficionado one may be of mysteries in book form, when they pop up in real life, they seldom fail to give one the pip.” Acutely conscious of that gap between books and life, Anthony Berkeley wrote a mystery that more closely approximated life--and it's still considered a tour-de-force. A baffled Scotland Yard lets a circle of six amateur criminologists take a wack at an unsolved case. On successive evenings, each amateur presents their solution. But the facts are open to so many possible theories, one member presents two plausible scenarios. As Berkeley intended, I was convinced by (almost) every solution—and then suffered with its author as the next amateur sleuth shattered all their carefully considered inductions and deductions. But wait, there’s more. After the mystery is “solved”, there’s “A New Dénouement”, by Christiana Brand and an epilogue penned by the book’s editor. Both, mind you, offering two more different, equally plausible solutions. While not perhaps as “pipped’ as Bertie would be, I admit to missing the usual satisfying finish. Fortunately, Berkeley retained that even more vital element of Golden Age Detective Fiction: a sense of humor. And Gordon Griffin serves that up perfectly.

2 stars for plot, 5 for influence

In The Poisoned Chocolates Case by Anthony Berkeley, published in 1928, Roger Sheringham, mystery novelist, has formed the Crimes Circle, a club of six people who specialize in murder, whether as writers or lawyers or other non-detective methods. At one meeting, Sheringham brings in Chief Inspector Moresby of Scotland Yard to tell them about a poisoning case that has stumped the experts at the Yard, with the goal of having each member of the Crimes Circle provide a solution to help the real detectives.

Sir Eustace Penfather was sent a box of chocolates, asking him to test out a new type of chocolate. However, not being interested, he gives the box to Graham Bendix, a fellow member of his club, who proceeds to give the box to his wife, Joan. Both eat some chocolate, but Graham has only two pieces, while Joan eats several more, so while he gets saved, she dies of nitrobenzine poisoning.

The six members of the Crimes Circle are given a week to do their own investigations and theorizing, not discussing the case with the other members of the club. Each member propounds a solution, each sounding realistic until the other members start to poke holes in the case, showing ways in which mystery writers get away with giving solutions through bluster and boldness to keep their readers from spotting the gaps in their logic.

As for the plot and characters of The Poisoned Chocolates Case, they fall rather short. Almost the entirety of the book takes place in the hall where the Crimes Circle meets and is devoted to lectures by each of the six characters, and the lectures get pretty tedious at times. Further, I found the many strands of evidence offered by the different members to get confusing as to which character has offered which piece of evidence and conclusion. Beyond that, I finished the book without knowing anything about the characters other than that one is a barrister who presents his arguments as he would to a jury, making it complicated to follow at times. I found parts of the book of interest, but as a whole, I found it tiresome.

On the other hand, this satirical book had a significant influence upon the world of detective fiction. It forced authors to look at the tricks they sometimes used, in particular solutions that rely on evidence not introduced prior in the book. A mere year after the publication of The Poisoned Chocolates Case, in 1930 Anthony Berkeley was instrumental in establishing a real- life version of the Crimes Circle, called The Detection Club, some of whose other illustrious members include Agatha Christie, Dorothy L Sayers, and Baroness Emma Orczy, with G.K. Chesterton's serving as the first president. The group had to swear to the following oath, likely written by either Chesterton or Sayers,

Do you promise that your detectives shall well and truly detect the crimes presented to them using those wits which it may please you to bestow upon them and not placing reliance on nor making use of Divine Revelation, Feminine Intuition, Mumbo Jumbo, Jiggery-Pokery, Coincidence, or Act of God?

So we can see how this book had significant influence on the world of detective fiction, even affecting murder mysteries today. It even pokes fun at itself, such as when one member gives the odds of any one given person fitting the criteria of criminal and then announces that he is the only man who fits the requirements.

Those who appreciate Agatha Christie and her 1929 book of short stories parodying then-contemporary detective stories, Partners in Crime will recognize the name Roger Sheringham. Tommy and Tuppence solve a "Sheringham mystery" in the story "The Clergyman's Daughter," though I don't personally see how this particular book of The Poisoned Chocolates Case connects with the story, so likely one of the earlier books inspired this story; however I thought it worth mentioning here.

Gordon Griffin performs the audiobook of The Poisoned Chocolates Case. Griffin uses good expression, but he does little to separate the various characters in his reading. As I listen to my books in bed and fall asleep to them, I had difficulty finding my place because I couldn't tell which character was talking. I suspect the dense content made the book harder to focus on while listening.

As for The Poisoned Chocolates Case, I found it hard to get through while listening. I suspect that it would be easier to follow in print instead of audio. The structure of the book got tiresome, seeming like a series of lectures. So on the basis of the story I give it 2.5 stars. However, the influence of this book on the modem mystery novel cannot be overstated. In highlighting the "tricks of the trade," this book challenged mystery authors to improve their methods of detection and play more fair with their readers. It also was key in starting The Detection Club, in which the significant mystery writers of the day developed a set of guidelines in which to use to play fair with their readers. So on that basis, I laud this book wholeheartedly and give it five stars.

I like the narrator—I’ve heard him do other books. But I will never listen to, or read anything else by Mr. Berkeley. He’s just too convoluted for me. I was so sick of the characters and their theories by the end, I didn’t even care or want to know who, what, when, where, and why!!

loved the twists and turns.. well read with the voices helping to keep track of the different personalities.

For historians of detective fiction

Very much a 'cozy' mystery, where armchair detectives work through the mysterious case of a death by poisoned chocolates. It's apparently somewhat famous in the overall history of detective fiction, as it presents more than one completely plausible and very tidy ending to the story.

I wasn't blown away but it was an enjoyable way to spend a day. I think I listened to the entire thing in two sessions. It might have only been one.

A classic from the Golden Age

This is an absolute classic from the Golden Age of detective fiction. You are guaranteed to keep puzzling and guessing as solutions are proposed and knocked down one by one. It is harder to follow in audio form, however, since you can't easily go back and check prior details as new points emerge. This version includes an introductory essay about the author, as well as two additional endings written by fellow members of the Detection Club -- I think the extra endings fall very flat, and the story is far better left in the original, but they had to be included if this is supposed to be a definitive edition. The narrator is good, giving the telling plenty of energy without overdoing it. Occasionally he throws emphasis on a strange part of a sentence, as if he doesn't quite understand what he's reading, but this is very infrequent. His voice is clear and pleasant.

I really really enjoyed this classic 'whodunit' from the golden age of murder mystery writing. It definitely kept me guessing.

A group of six people from a crime club and attempt to identify the murderer of the eponymous poisoned chocolates case. Each comes up with an ingenious theory, each in turn has their theory quashed by their fellow club members. I had personally come up with theory number four it I was wrong...

The story can occasionally get a little long winded but the twists and turns will keep you listening. I thoroughly recommend this story.

A satisfying and enjoyable book. Very well read. Appreciated the addition of the two extra "chapters".