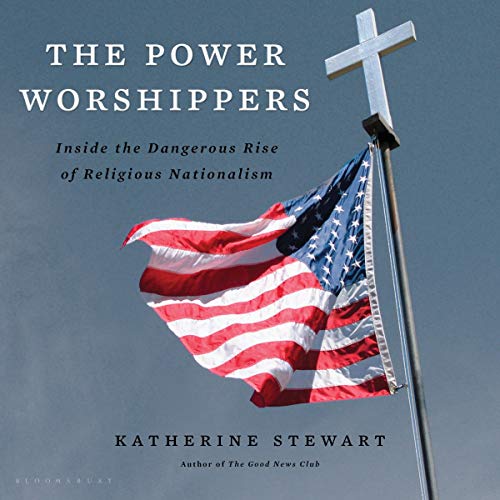 For listeners of Democracy in Chains and Dark Money, a revelatory investigation of the Religious Right’s rise to political power.

For too long the Religious Right has masqueraded as a social movement preoccupied with a number of cultural issues, such as abortion and same-sex marriage. In her deeply reported investigation, Katherine Stewart reveals a disturbing truth: this is a political movement that seeks to gain power and to impose its vision on all of society. America’s religious nationalists aren’t just fighting a culture war, they are waging a political war on the norms and institutions of American democracy.

Stewart pulls back the curtain on the inner workings and leading personalities of a movement that has turned religion into a tool for domination. She exposes a dense network of think tanks, advocacy groups, and pastoral organizations embedded in a rapidly expanding community of international alliances and united not by any central command but by a shared, anti-democratic vision and a common will to power. She follows the money that fuels this movement, tracing much of it to a cadre of super-wealthy, ultraconservative donors and family foundations. She shows that today’s Christian nationalism is the fruit of a longstanding antidemocratic, reactionary strain of American thought that draws on some of the most troubling episodes in America’s past. It forms common cause with a globe-spanning movement that seeks to destroy liberal democracy and replace it with nationalist, theocratic and autocratic forms of government around the world. Religious nationalism is far more organized and better funded than most people realize. It seeks to control all aspects of government and society. Its successes have been stunning, and its influence now extends to every aspect of American life, from the White House to state capitols, from our schools to our hospitals.

The Power Worshippers is a brilliantly reported book of warning and a wake-up call. Stewart’s probing examination demands that Christian nationalism be taken seriously as a significant threat to the American republic and our democratic freedoms.

"If anyone is wondering how the Religious Right and President Donald Trump ended up in their unholy alliance, Katherine Stewart has the answer. The Power Worshippers provides a fascinating x-ray into the political eco-system of religious conservatives who threaten the health of our democratic institutions. She argues that this movement is much more about power, money and invented pasts than ethics, theology and God. Stewart’s book is an important contribution to our understanding of contemporary politics." (Julian E. Zelizer, author of The Fierce Urgency of Now)

"Katherine Stewart knows from years of investigative reporting why the Trumpvangelicals who use faith to whitewash corruption are a preeminent threat to American democracy. Read The Power Worshippers and you will understand why nothing is more important to the health of our common life than challenging the false moral narrative of religious nationalism." (William J. Barber, II, President of Repairers of the Breach and Co-Chair of the Poor People’s Campaign: A National Call for Moral Revival)

"Katherine Stewart presents chilling evidence that millions of American churchgoers are being inflamed and exploited by a cynical, well-funded alliance of power seekers. Read The Power Worshippers to understand what the relentless political agitation against abortion and homosexuality has really achieved - and for whom." (Nancy MacLean, author of Democracy in Chains)

What listeners say about The Power Worshippers

The Audible editors were AWOL on this one

I think that the Audible quality control process failed this author - Tosca Hopkins has a pleasant enough voice, but stretches of this book sounded like speech synthesis and her mispronunciations and mistakes were jarring. Repeatedly mispronouncing author Ayn Rand's first name, referring to 'indigent' families as 'indignant' families - there are enough flaws scattered throughout this recording to discourage all but the most forgiving. To be clear, I lay this problem at the feet of Audible - they owed it both to the author and the narrator not to have accepted this work without re-recording it in multiple spots. Raise your game, Audible editors.

I loved this book! However, a few mispronounced words that was grating to me. I feel like this book was recorded in a hurry.

This book is quintessential to understanding how we have the Trump administration and why having religion influencing our schools and politics is having consequences for Progressive Christianity and for non believers/ no belief affiliation.

Scared the crap out of me

well researched, well written. Should be required reading for anyone concerned about our country.

Informative and Gets Underneath The To The Truth!


I couldn't stop listening! It gave me specifics to what I believed was happening in our nation at this time. In depth understanding of the ideology of this political and power hungry movement.

I am all too aware of this movement, having left it after about ten years. I married in and had no idea what any of this was about. I watched the true gospel morph into this unrecognizable force. I left, under threat of hell, illness, etc, as leaving God's call to His Kingdom's work and His protection. Evangelicals believe that only the Republican Party will save us from the rise of an antichrist, destined to come up through the Democratic (deep state) Party. What began, by successfully electing Reagan through "group voting," has reached new heights with Trump, literally anointed by evangelicals as chosen by God. Trump is their messianic champion, likened unto Cyrus, to excuse his lack of Christian behavior, while God directs him toward American greatness. I have personally witnessed the validity of this author's journalistic content. This book is a must read for anyone confused about the state of politics in the US today.

Terrifying in its Familiarity

I would have found this unbelievable if I hadn't grown up in this movement. This book really helped to shine a light on all the things I felt were vaguely wrong as I got older, and helped me understand the origins and effects in a way that makes me even more glad I escaped.

The US is in crisis. This is a statement that few if any would dispute. But how did we arrive at this point in our history? For the past three and a half years I have been trying find answers to that question. My research has lead me to a few tentative hypotheses, but no clear answers. Who and What brought us to the crisis we face? How and Why? Katherine Stewart’s “The Power Worshippers” provides a compelling narrative that elegantly explains why today we have wonder whether or not our democracy, with all its flaws, will survive.

In a March 20th Washington Post review of Ms. Stewart’s book, Jodi Eichler-Levine wrote:
“‘The Power Worshippers’ is required reading for anyone who wants to map the continuing erosion of our already fragile wall between church and state.” I wholeheartedly agree with this statement.

On page 277, in the very last paragraph of “The Power Worshipers” we read:
“In some ways, Christian nationalism is the fruit of a society that has not yet lived up to the promise of the American idea. There is work to be done, but for now we are free to do it. We have met challenges in the past—well enough, at least, to make it to the present moment. Religious nationalists are using the tools of democratic political culture to end democracy. I continue to believe those same resources can be used to restore it.” Again, I couldn’t agree more.

I found this book the most explanatory of any that I’ve read regarding how Trump gained his support, why he loves Putin,* and other modern mysteries. Rather than there being a cult of Trump, it explains that the Conservative Evangelical movement is a Christian cult--Trump is only its “useful idiot.” (A “useful idiot” being someone who helps a foreign power to undermine their own country without realizing that they are being used in this way.) The book is an exposé of the Conservative Evangelical push towards theocracy in the U.S. and abroad. I had read Democracy in Chains, which describes how plutocrats like the Koch Brothers have put the Conservative Evangelicals to work for Libertarian causes. The Power Worshippers describes the other side of the equation—how Conservative Evangelicals have used the funds of plutocrats to further their theocratic agenda. OMG, we have work to do if we want to keep our democracy! I think that a key step is to understand the puzzling lack of concern that right-wing Evangelicals have with Trump’s authoritarian yearnings. I wish that everyone who is concerned about the future of our democracy would read this book—then they’ll be able to recognize the steps that Evangelicals are following to undermine the separation of church and state that could bring a theocratic dictator to power. Of course, this is a pretty depressing outlook on the future. One way that I keep the depression at bay is to work each day on getting out the vote to defeat Trump. I write five letters each evening to voters who disapprove of Trump, urging them to vote in the Presidential election. This is part of the Vote Forward campaign which you can look up on-line. *At least part of the reason—he may also have his own personal reasons for loving Putin.

"They" are out there (but not as many as inferred)

WallBuilders and David Barton's books, which Katherine Stewart covers, influenced my childhood. I even had Abeka VHS tapes and books for science while homeschooling so I'm O.G. in the Power Worshipper world. Her descriptions are accurate but... you are led to believe there is an enormous religious influence on our government institutions. Influence? Yes. Enormous? Maybe in their minds. Imagine a loud minority within the larger religious world. They create a ruckus and do influence politicians but their influence is limited. The majority of religious Americans are unaware of these players and would not subscribe to their imagined theocracy. So be aware but don't fret...much.

It’s so discouraging to know trump is their hero. And how they use religion to help push their own narrow minded approach to just about everything

The teaching of hate and intolerance is not a religion, it is called a dangerous mass cult, which history teaches us leads to war.

This book is not just about the rise of the Christan right in America, it's also about the global push for Christian Nationalism. I found The Power Worshippers, to be very well researched and written in a way that puts all the pieces together . If you care about the kind of world you want your children to grow up in....read this book! Knowledge is everything.