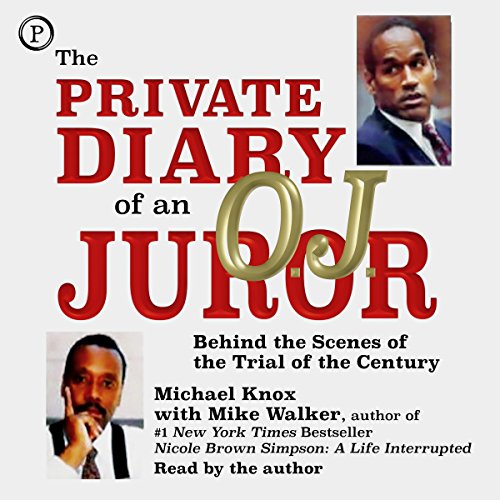 The Private Diary of an O.J. Juror

This work was originally published prior to the conclusion of the O.J. Simpson murder trial. At that time, California state law made it a crime for jurors and ex-jurors to be paid for writing about their service until 90 days after a trial had ended. That law was found to violate Michael Knox's First Amendment rights, clearing the way for his story to be made public before the trial had ended.

Here, Knox reveals that while racial divisions existed on the panel, they were grossly exaggerated. He describes the oppressive, bizarre, and demeaning life of sequestration, where alcohol is prohibited and privacy is nonexistent...even during conjugal visits, jurors worried about having their conversation taped. Knox also explains why he was leaning towards a guilty verdict just prior to his dismissal as a juror.

What listeners say about The Private Diary of an O.J. Juror

This trial had so much of America captivated, including me, that it needs to be reexamined from a citizens point of view.
Of all the books I have read on the trial it was the most candid about how life was then in that area.
The fact that the author was not involved in trial deliberations does not detract from it's value as a book.
It only makes me wonder how much better it would have been had he done so.