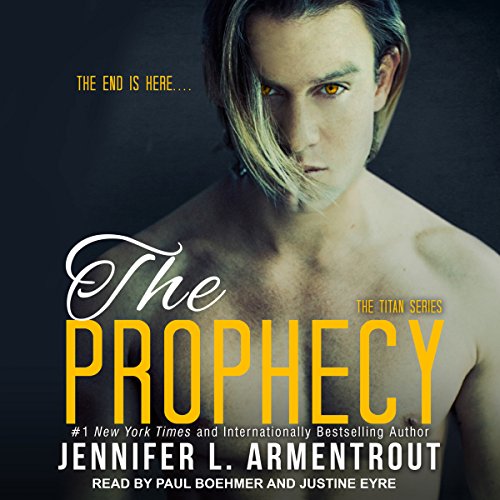 Seth never thought he'd have a future. But now he's on the brink of having it all with Josie: A tomorrow. A family. A forever. And all that's standing between him and that forever is the Titans.

If he helps Josie entomb them - without killing them, a nearly impossible task for him - everything he could ever want will be in reach. But he soon realizes that as a god, every little choice he makes can reshape the world for the better . . . or worse. And in meddling with the Titans, Seth may have just set into motion catastrophic consequences that will force the Olympians to enter the mortal realm and reshape the delicate balance of power that keeps the world from total collapse.

Entombing the Titans is Josie's top priority. After all, it was what she was born to do. But the plans her father put into play to help her are no longer an option, and the odds she and Seth face in forging their own path are grim.

The escalating violence between halfs and pures only increases the danger closing in on them and their friends. Josie knows their chances of succeeding in their task are slim at best, and if they fail, they might lose everything.

But she also knows she's not fighting just for herself - she's fighting for the man she loves, for their future, for the world.

What listeners say about The Prophecy

I was not expecting any of that, I love when series surprise me like that. I really had no idea what was going to happen and the way it all plays out well I had all the emotions. From frustration to elation to sorrow to sadness than hope and again sorrow. My word than happiness. I just loved this whole book I can’t really go into specifics or I would be giving the best parts away. Just know that this was so, so, worth listening to. Why oh, why did I wait so long!

Loved it and loved the narration I am a fan.

Main male voice is supposed to have a slight accent that is a somewhat unrecognizable, yet I felt like I was listening to count chocula. IF.. you can get past that, it’s worth listening to. Otherwise, read it.

Omg one of the best end ing but the series was fantastic the 2 narrated made the books Paul Boehner made Seth so great 👍love 2 just hear him talk .hope 2 hear Paul do some more narrtiont

love it? yes. made me cry a little? yes.

I loved this series, and the ending of this book was a perfect conclusion. the factbthat Marcus was the one to (**SPOILER**) officiate the wedding was ancuteband pleasant surprise. Apollo's death and Josie and Seth naming their son Leon were both beautiful and heartbreaking + bittersweet.
the only thing that did throw me off about the narration was the sudden way Luke got an accent for the past two books. if they'd suddenly changed narrators, I'd kinda get it, but The Struggle was the third book or this series, and Justine for example, narrated the Covenant and Titan series for years, so what gives?

Loved this. I have been team Seth since the Covenant books. Ready to read all over again.

Breathtaking! That is truly what The Titan series is! Absolutely breathtaking, heartstopping, all of the above. I wish it wasn't over but I am truly satisfied with this ending, Jennifer L. Armentrout has done it again!

This series was good and well written. It keeps you guessing until the end. I'm looking forward to reading or listening to more books.

I enjoyed the entire series. It made me happy sad, and scared at times. This story kept me engaged in every book. I really loved the main characters and the journey between Seth and Josie was just perfect. All the different Demi gods , half’s and such was very interesting. Im hooked on JLA books.

I truly love this series it was the perfect ending for both of the series.

I loved this series! I cried and laughed and just loved this story. I couldn't stop listening to it!