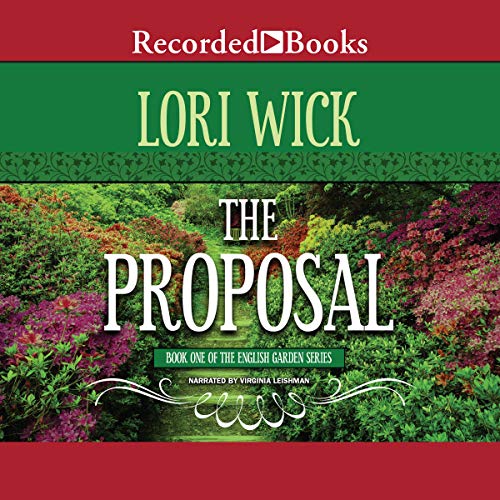 Acclaimed, best-selling author Lori Wick’s The Proposal is a moving tale of Christ’s love at work in early 19th-century London. William Jennings is not married and likes it that way. But when a relative passes away, he is suddenly guardian of three young children. This unexpected development provides him a male heir without the bother of a wife, yet the children quickly become more than he can handle. Finding help from a truly remarkable woman, he learns to see the world in a completely different light.

Would you consider the audio edition of The Proposal to be better than the print version?

The book was great and the audio lives up to the books greatness.

Everything. Characters were great. The story was wonderful.

Which character ??? as performed by Virginia Leishman ??? was your favorite?

She did a great job on male and female characters. You were immediately engrossed in the story as she had all the characters flow flawlessly.

If you could rename The Proposal, what would you call it?

It's a great title I wouldn't change it.

Thank you audible for having more Lori Wick books. She has a lot more we would all enjoy listening too. Can't wait to see more listed.

What made the experience of listening to The Proposal the most enjoyable?

The narrator's English accent really helped the story come to life. I enjoyed getting a glimpse of what country life for the priviledged was like during this period of England's history.

What other book might you compare The Proposal to and why?

Similar in some ways to Colleen Coble's Lonestar series where characters in those stories marry out of need, rather than love. Both author's do a good job of demonstrating the importance of friendship, respect, and commitment in a marriage, rather than depending solely on love.

What does Virginia Leishman bring to the story that you wouldn’t experience if you just read the book?

The accent, most definitely!

This is a wonderful book. It was the first Lori Wick book for me to "read". It will not be the last. Audible is quickly becoming my favorite. The narrator did a great job.

I Loved the Book and despised the performance

I love this series! I love Lori Wick! I have never read a book of hers that I haven't liked. However, the performance by Virginia Leishman left a lot to be desired. Now don't get me wrong, her style of reading was good for the most part, and the various voices that she used for the different characters was also good, it was the noises that she kept making with her mouth while she was reading that drove me insane. Every time she made one of those noise I wanted to cringe. At one point during this book, it got so bad that I almost gave up on the entire series when I realized she read all the books. The noises that she made almost sounded like chewing or like she was swishing the spit in her mouth around. It was just gross and I believe I will stick to reading these on Kindle from now on.

the oldest sibling… I forgot his name, but he is my favorite character. The wisdom and caring for his younger siblings is just astounding.

Who would you have cast as narrator instead of Virginia Leishman?

I'm not well-versed enough to have a good answer to this, but I'm not sure that anyone that didn't make those horrid noises with their mouths wouldn't be better.

Was The Proposal worth the listening time?

No, but not because of the story. The story was excellent. It was the performance that makes me say no.

Happy to see it available on audible

I have read the book 3 times. In fact all in this series. Would love to see the Kensington Chronicles on audible.

The whole time I was listening to this book, I wondered if it was the author's first book. Story line was too simple, not much depth in both the characters or story. I MIGHT read the 2nd book in the series just to see if her writing technique has improved.

I thoroughly enjoyed listening to this story!

I love the author! The reading read excellent!

This was a well told story with heart, feeling and characters you will love and enjoy!

This book had me laughing, crying, surprised, inspired, and excited. So many feelings a good story can bring.

Lori Wick has been one of my favorite authors for many years. For me it was a very special surprise when I signed up for audible books that she had one there for me! I hope one day I can have Sophie's heart on audible.