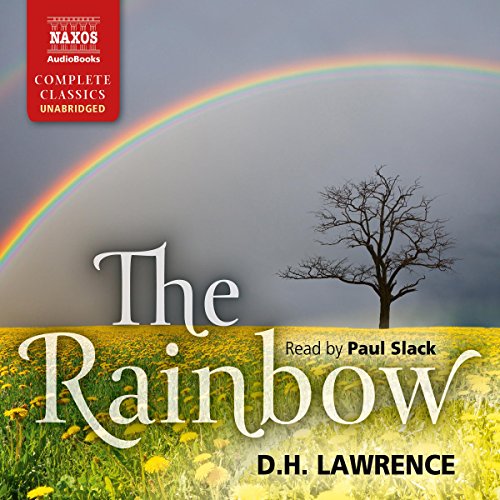 D. H. Lawrence's controversial classic, The Rainbow, follows the lives and loves of three generations of the Brangwen family between 1840 and 1905. Their tempestuous relationships are played out against a backdrop of change as they witness the arrival of industrialization - the only constant being their unending attempts to grasp a higher form of existence symbolized by the persistent, unifying motif of the "rainbow". Lawrence's fourth novel, a prequel to Women in Love, is an invigorating, absorbing tale about the undying determination of the human soul.

Roy G. Biv, the Birds and the Bees


This D.H. Lawrence novel, published in 1915, was almost immediately banned as obscene and the first printing of over 1,000 copies were seized and burned. It was not available for purchase in Britain for the next 11 years.

No doubt, this book treated sexual desire as candidly as most books theretofore published. While it is relatively mild by today's standards over a century out, it handled sensuality in a way that is true to life as a natural and spiritual force in humans, the passion to consummate the desire for intimacy and the love of another.

Frankly, this is one of the only literary novels that animated my appetite for affections, with passages such as:

"His body trembled as he held her. He loved her till he felt his heart and all his veins would burst and flood her with his hot, healing blood. He knew his blood would heal and restore her. ... His head felt so strange and blazed. Still he held her close, with trembling arms. His blood seemed very strong, enveloping her. And at last she began to draw near to him, she nestled to him. His limbs, his body, took fire and beat up in flames. She clung to him, she cleaved to his body. The flames swept him, he held her in sinews of fire. If she would kiss him! He bent his mouth down. And her mouth, soft and moist, received him. He felt his veins would burst with anguish of thankfulness, his heart was mad with gratefulness, he could pour himself out upon her for ever. When they came to themselves, the night was very dark. ... They lay still and warm and weak, like the new-born, together. And there was a silence almost of the unborn. Only his heart was weeping happily, after the pain. He did not understand, he had yielded, given way. There was no understanding. There could be only acquiescence and submission, and tremulous wonder of consummation."

The focus is on three main characters: Tom Brangwen, Anna Brangwen (his Polish adopted daughter who married Tom's nephew, her first cousin by law, not blood) and Anna's daughter Ursula Brangwen. It spans about 65 years from the 1840s to 1905. Tom married a Polish refugee/widow named Lydia who had a 10-year-old daughter Anna. Tom (a farmer) and Lydia as well as Anna and Will (a wood craftsman) are happy enough to live in Nottinghamshire in the east Midlands of England. Yet, as time goes by, England becomes more industrialized and urbanized, and Ursula seeks an education to become a teacher.

A little over half of the novel covers the first 2 generations, while the remainder focuses on Ursula and her passions. Ursula falls in love with Anton Skrebensky, a British soldier of Polish ancestry, but he is conscripted to go to Africa.

"She turned, and saw a great white moon looking at her over the hill. And her breast opened to it, she was cleaved like a transparent jewel to its light. She stood filled with the full moon, offering herself. Her two breasts opened to make way for it, her body opened wide like a quivering anemone, a soft, dilated invitation touched by the moon."

After Anton's departure, Ursula has a sexual relationship with her female teacher which she breaks off long before Anton's return a few years on. Yet, things are not so clear with Anton. At the book's end, Urusula dreams of a rainbow towering over the Earth:

"She saw in the rainbow the earth's new architecture, the old, brittle corruption of houses and factories swept away, the world built up in a living fabric of Truth, fitting to the over-arching heaven."


The story of Ursula and her sister Gudrun continues in a sequel published in 1920 called "Women in Love," which I intend to read.

I've read several D.H. Lawrence works recently and although they are in many ways dated in their attitudes, manners and worldview, I'm forever in awe of his lyricism, vocabulary and stabs at the heart of what it is to be human and to relate to the Universe....That said, I many times mourn the loss of any real plot or arc in his works..It would make it so much easier to finish his dense and lengthy works...

This is the sort of book that makes me really appreciative of audiobooks and good readers. This book has long, gorgeous descriptions that feel almost stream-of-consciousness sometimes; this and the older style of writing is the kind of thing that might make it difficult for me to focus on for long periods were I to sit and read the book. But as an audiobook, it was easy to let the words wash over me. The narrator really kept the energy up and brought the prose to life.

There were some parts I found repetitive and I didn't fall in the love with the characters the way I would have liked, but I'm aware that these criticisms are at least in part due to my own preferences when it comes to fiction. The fact that I found this book as compelling as I did despite it not really being my kind of novel speaks to the strength of the writing and its narrator.

Horrible story about a completely self centered young woman

Interesting family. Most difficult to have any empathy for. It also ends rather abruptly without leaving very much to ponder

It's difficult to imagine a better reading than this one. Paul Slack is the voice of Lawrence. Also excellent on Sons and Lovers