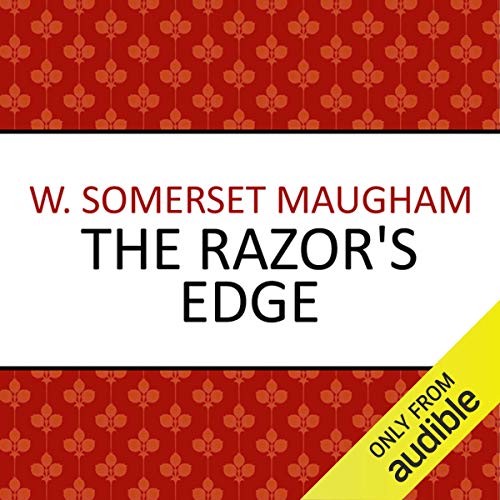 Larry Darrell is a young American in search of the absolute. The progress of this spiritual odyssey involves him with some of Maugham's most brilliant characters: his fiancée Isabel, whose choice between love and wealth have lifelong repercussions; and Elliot Templeton, her uncle, a classic expatriate American snob.

The most ambitious of Maugham's novels, this is also one in which Maugham himself plays a considerable part as he wanders in and out of the story, to observe his characters struggling with their fates.

William Somerset Maugham (25 January 1874 – 16 December 1965) was an English playwright, novelist and short story writer. He was among the most popular writers of his era and reputedly the highest paid author of the 1930s. Maugham was orphaned by the age of ten, but after an unhappy childhood, he flourished when he moved to London to study medicine as a young man, giving him plenty of inspiration for his literary ambitions. His first novel, Liza Of Lambeth, sold out in a matter of weeks, prompting Maugham to leave medicine and embark on a 65-year career as a man of letters. By 1914 he was famous, with ten successful plays produced and ten novels published. In 1917, he was asked by the British Secret Intelligence Service (now MI6) to undertake a special mission in Russia; an experience which would go on to inspire Ashenden, a collection of short stories about a gentlemanly spy that influenced Ian Fleming’s James Bond series. Maugham’s most famous works include Of Human Bondage, a semiautobiographical novel, The Moon and Sixpence, Cakes and Ale and The Razor's Edge. His writing has inspired a string of over 35 film adaptations and has influenced many notable authors, including Anthony Burgess, George Orwell and Gabriel Garcia Marquez.

What listeners say about The Razor's Edge

A good take on life and aspirations. Every individual has a different take on what success means and that's what this book very nicely describes.

Enjoyed both story and audiobook

I enjoyed both story and the audiobook. I hesitated to buy for several months to few reviews on this work. However, once listened to it, I found it wow. Thank you.

One of my desert island books


This is a masterpiece IMO. It's about the meaning of life. The characters seek it in different ways and find it (some in death - not all the endings are conventionally happy). Along the way, there is the wonderfully objective narrator who makes you laugh out loud at times. The exchange about the inscription on Elliott's tombstone, for example. The older I get, the more I think Maugham's approach is the only one to take.

The reading was good, although the narrator might have done a bit better with his French. The American accents were OK to my ear but I don't guarantee them - Americans should listen to a sample first as it's very off putting to hear the wrong accent. But whatever you do, listen to this or read it, once when you are young and once when you are older, and see if your response changes.

This was a book that I remember first reading in Ireland in 1979 having borrowed it from Pyle library in South Wales and being impressed by the title alone. It was the first book by W. Somerset Maugham that I’d ever read and it made such a positive impression on me at that time that it lead me first to a range of ancillary reading around European philosophy and Eastern religions and then into repeated visits to Maugham’s Œuvre.

Now, after thirty years I re-read on the basis that my son was looking for something to reflect his first awareness and interest in Eastern religions and I suggested that he give it a go. Whilst some of the central narrative remains as sharp as ever, I was disappointed to find that on re-reading it is not the great work of revelation that my mind had honed it to become. There is a lot of superfluous non-activity and a fair bit of fairly non-enhancing detail, so that the final third of the novel left me impatient to get back to the central theme of the action.

Some important highlights and a great stepping stone into other works - I am a big fan of Maugham's stories and novels - but ultimately there was that small let down when I finally completed this one. My son reckons he enjoyed it hugely, however.

I loved it from beginning to end

I'm a huge fan of both the author and narrator so this was a real treat for me.

A relaxing story to listen to but by no means dull, don't get me wrong. Gordon Griffin reads so well, the voices he created for Somerset Maugham's complex characters formed a vivid picture in my mind without my even noticing it.

This was a real joy.

I first enjoyed Somerset Maughham when taking English as a student. I have not read anything from him since but decided to give this book a try and I am very glad I did.

A thoughtprovoking story, very well read and it has you longing for being well-off and living in the first decades of the 20th centuary.

If you managed to avoid WW1, that is.

Slow paced with wonderful narration that keeps the listener's attention throughout. The the interweaving of complex relationships and characters is masterful.

An interesting and unusual book with the author participating in the story. Not just autobiographically but with asides addressing the reader. He uses the lives of people he has known, but with pseudonyms to reduce identification. They are used as illustrations of moral and philosophical ideas but couched in engaging stories about their lives against the backdrop of the two decades following the first world war and the upheaval of the Wall Street crash on those who had become wealthy in the boom times in the USA. Much of the action takes place in France involving a wealthy socialite, Elliot, who provides a refuge in Paris for his American relatives: a couple who had lost a lot money in the crash. Also in Paris at the same time is a former US airman whose attitude to life’s values had been over-turned by the war and who is seeking culturally enriching experiences and later travels around the world in search of spiritual enlightenment. Without being heavy-handed, the different stories about these and other characters illustrate different moral values and what matters in a fulfilling life.

I enjoyed the book as it didn’t overdo the morality messages conveyed by the engaging stories about the characters. It certainly made me think about relationships and what matters in life. My only quibble was a long section near the end of the book that was too heavy on religious/spiritual discussion for my taste. Though the author does warn that the chapter can be skipped.

The narrator is excellent.

Would you listen to another book narrated by Gordon Griffin?

I had wanted to read this book for years as I love Somerset Maugham and found listening to it easier than reading it. It is a difficult book made easier

I find reading quite difficult these days, so audible books fill two roles; they fill in the silences, and they entertain. The enjoyment of audible books depends on the listener's taste in readers. Gordon Griffin was excellent in this recording. Well Done !

A captivating story written by a master and narrated well.

In The Razor’s Edge, Maugham takes us into the glamorous world of the British and American expatriates in pre-war Paris and the French Riviera and he tells his story so straightforwardly one is hardly conscious of the intricacy of the novel’s structure. His writing is elegant without ever being ornate or precious, and his characters are recognisable types and absolutely convincing whilst always engaging our interest and emotions.

This is the first W Somerset Maugham novel I have read/listened to. I found it very hard going in the beginning and nearly gave up, but I persevered through to the end.
The problem was that I didn't warm to any of the characters except, as the story progressed, Larry (and the narrator). I found Larry's spiritual journey very interesting but the rest were just a bunch of selfish spoilt snobs.
The reader was excellent and really brought the characters to life, but I won't be seeking out anything else by Maugham.

A fascinating view of a time long past

This is my first reading of a book by Maugham. It transported me. The characterisation was brilliant. All of the characters, especially the main character, Larry, were described with obvious insight. The eastern point of view, the essence of Hinduism and its implications for the west, was captured succinctly by the author. The narration suited the story and contributed to my immersion. The themes are now more vital and current than at the time of writing. It is fascinating to follow Larry's journey in both the physical and spiritual landscapes, a journey followed, of course, by many in subsequent generations.

This book shows that nothing has changed in human nature despite wars, depression and financial crashes. I loved the possibility of freedom that is shown in Larry's character and the realistic way the other characters have been portrayed, relevant even in today's society.
I found myself pondering life in all sorts of ways, and couldn't wait to get back to it if I had to turn it off.

A classic brought to life.

It’s impressive that a 100-year old book is still relevant today. This family and friends saga spanning World War I and the depression and the growth of America and Europe is deservedly a classic. It raises some interesting moral and ethical dilemmas and is only occasionally bogged down by overly long mystical musings.

An interesting story, beautifully written and superbly read. Going back for another. Maugham is masterful.