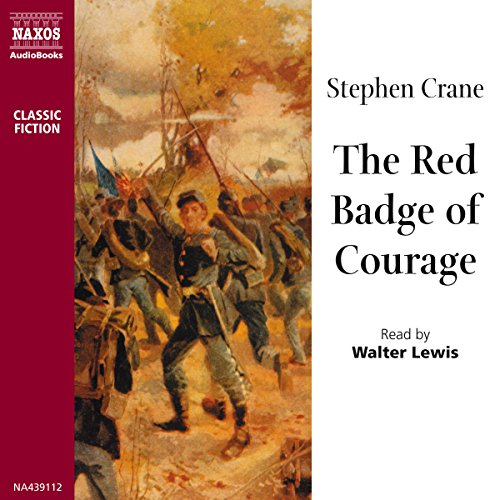 Crane's classic story of Henry Fleming's rite of passage in the Civil War is superbly narrated by Walter Lewis. His voice is extremely versatile and expressive. Although Henry and the men of his regiment are from New York, Lewis's Midwestern accent ably conveys the rural character of the personalities in the work. The narration is done just as well; when hearing of the panic of Henry's regiment at the second Confederate assault, one can sense the terror that can so quickly seize and carry away men in battle.

One of the great war novels, The Red Badge of Courage describes the first experience of front-line combat through the eyes of a young recruit, Henry Fleming, in one of the battles of the American Civil War. Under the stress of battle, Fleming is forced to face strong, conflicting emotions, ranging from bravado to terror as the conflict ebbs and flows. Written some 30 years after the war, when Stephen Crane was only in his mid-20s, its inimitable truth makes it just as relevant today.
©2000 NAXOS AudioBooks Ltd., All Rights Reserved (P)2000 NAXOS AudioBooks Ltd., All Rights Reserved

What listeners say about The Red Badge of Courage

Having served in combat three times, I can attest to this account. Though fiction, I had similar feelings; specifically about earning the Red Badge of Courage. Having earned the Purple Heart, there's nothing more I'd rather NOT have.