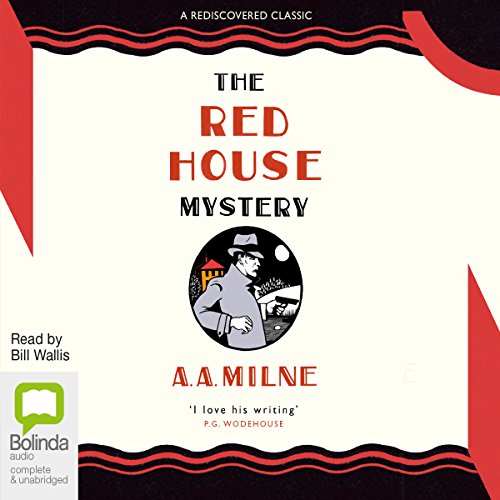 A. A. Milne is most prominently remembered as the author of the well-known Winnie-the-Pooh tales, written for his son, Christopher Robin. Milne was born in London and raised in his father's private school, Henley House, after which he attended Westminster School and Trinity College, Cambridge, to study mathematics.

By 1925 he had published 18 plays and three novels, including The Red House Mystery (1922). This was Milne's first and final venture into the detective and mystery genre despite its immediate success and an offer of 2,000 pounds for his next mystery novel.

The story is set in the quaint English countryside, at the house party of Mark Ablett, where a murder quickly takes place. Milne lets his readers inside the head of his amateur detective, disregarding the clichéd romance or violence of other detective novels, as the mystery becomes a puzzling sort of parlor game for the novel's characters and readers alike.

What listeners say about The Red House Mystery

I came upon this by accident and was so glad I did. I thoroughly enjoyed it, and although I guessed a small part of the plot I really enjoyed the explanation of the who and why etc. at the end. It is a pity that there no more written by A.A.Milne as I would have had another favourite author along with Agatha Christie to listen to.

Over long and rather dull

It's well read but rather repetitive and boring. Felt quite amateurish and striving. It's saved by the narration which is soothing and helped me fall over to sleep!

I wish there were more!

Thoroughly enjoyable old school whodunnit. Perfect for a cosy evening. Such a shane that Milne didn't write any more!

Winnie the Pooh has a lot to answer for.

Great example of it's genre, light hearted and quick paced. Nice but simply drawn characters, complex but unsubtle plot, more twists than a curly whirly. Nicely read too.
If it wasn't for Winnie the Pooh he might have written more!