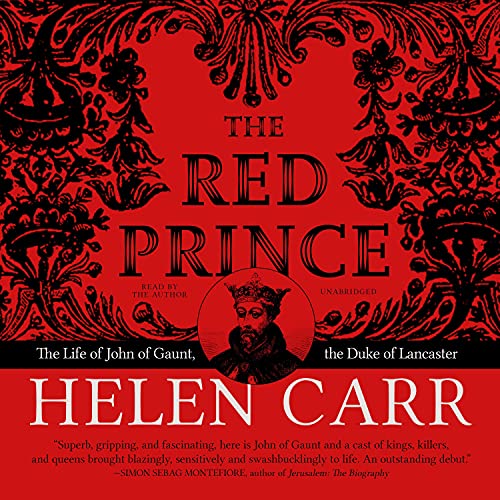 Medieval history from a rising star in the field, this is a biography of one of the most important figures of the age, John of Gaunt.

John Gaunt was the son of Edward III, brother to the Black Prince, father to Henry IV, and the sire of all those Tudors. He has had pretty bad press: supposed usurper of Richard II’s crown and the focus of hatred in the Peasants’ Revolt, as they torched his home, the Savoy Palace.

Helen Carr paints a complex portrait of a man who held the levers of power on the English and European stage, passionately upheld chivalric values, pressed for the Bible to be translated into English, patronized the arts - and, if you follow Shakespeare, gave the most beautiful oration on England: “this sceptred isle...this blessed plot.”

The Red Prince is an engrossing drama of political machinations, violence, romance, plague, revolt, and tragedy played out at the cusp of a new era.

What listeners say about The Red Prince

This is an historical reference about John of Gaunt and is meticulous. I have never read much about the subject but for anyone interested in English history I would consider this a good read. John of Gaunt is the figurative father for the War of the roses and the Tudor house. Highly recommend this book.

A short telling of the times in which Gaunt lived. The author seems to merely use Gaunt as a back drop to the Era. It is a shame because Gaunt has a good amount of authorative information the author could gave told a more complete story of a very interesting man.

Worth a listen as a primer, or general interest.

I confess to knowing very little about the era or even the geography of Western Europe but I found the tale engaging and the narrative clear.

First, I normally HATE authors who narrate their own works unless it’s a very interesting and honest autobiography. (And even then you’d better be as good as Trevor Noah!) I’m especially hard on narrators who think they can pull off masterful performances comparable to pro narrators Simon Vance, Nadia May, Dion Graham, Wanda McCaddon, John Lee, or Simon Prebble. But Helen Carr not only delivers an in-depth historical account about Plantagenet prince John Gaunt, she narrates her well-researched book to perfection. I’m not going into a long discourse here. But if you like well read books about the history of Britain, you can’t go wrong here. ENJOY! 👍🏽

Why I didn’t listen to this book.

I did not listen to this novel. The reader had to take breath so often that it was distracting. I realize the reading is not an easy task.
Thank you.

However, however, and more however.

Liked the subject and the reading HOWEVER the overuse and outright misuse of the word HOWEVER absolutely dozens of times was a real disappointment. History students could make this book a drinking game and that may make hearing the word HOWEVER more palatable, but I doubt it.

I listen to history all the time so that wasn’t the problem. This was just painfully boring written without humor or insight or anything to bring it alive. I couldn’t bear it and stopped after one long tedious hour of listening.

Unimaginative performance by the author whose historical perspective yielded little in the way of anything other than names, dates and places.

Well read. Beautiful voice. Historically significant. My only dilemma is the author's giving John of Gaunt the benefit of a doubt in most questionable situations, which is not the way most historians handle John of Gaunt. Definitely recommended reading.

I've always enjoyed the History of John of Gaunt!
His family and descendants make for very Entertaining and Inciteful reading to a Yank. That happens to be an Anglo/Scotophile!
The Narration is Delightful and makes the History flow!

Whilst there is a wealth of in formation in here I've stopped listening midway in chapter 2. The narration is the worst I've ever heard, sucking air into her lungs mid sentence, and the constant sniffing, somebody get her an handkerchief so she can blow her nose. History totally ruined by rotten narration.

This is an excellent and informative history of John of Gaunt. The writer’s easy style encourages you in and it is clearly well researched.

Reasonable historical biography, though I thought there was some dumming down in places and some historical inaccuracies. Would have been better if it were not for the woeful narration by the author. Really have to wonder at some of her mispronunciations: did she really not know some places? OK, but I’ll choose other books rather than read another by this author.

Hard to stay engaged because the narration is not engaging. she sounds like a college major reading her thesis out to the examination board.

History needs to be delivered with passion and colour. Major characters and events need to stand out. She reads off each character and battle with the same indifferent tone so that everything just merges into a dull series of events.

Authors including many historians are not always the ideal narrator.
Writing and reading aloud are two distinctly separate skills. The latter is a performance art, closer to acting.

I wish authors would realise this.
They all seem to think they're Stephen Fry.

Loved every minute. Will listen to it again and again. Highly recommended. Very informative.

Absolutely loved listening to this book, we have to buy the hard copy now

An amazing, a new perspective of English history, superbly researched and enthralling throughout. thoroughly enjoyed

Really enjoyed it and would definitely read more of her stuff

A solid book book if you are interested in this time period or interesting historical figures.

Whilst this is a solid book about an incredibly interesting historical figure I was left a little disappointed. The narrator is ok, she gets the job done and is easy to listen to but very monotone at times.

I came across this book after finishing “The Black Prince” by Michael Jones. I knew it had a different author but I hoped it would be a similar style book as I very much enjoyed the previous book. Whilst this books attempts a similar structure I found it very clunky. Especially early on in this book, you find yourself jumping forward and back in time, often to then only have Gaunt mentions in one sentence. I don’t think it is as good as the book on the black prince but still enjoyable none the less.

However, as Gaunt ages and his father and elder brothers power and health begins to wain Gaunt comes into his own and this book finally shows what it can do. Gaunt is an incredibly interesting figure often forgotten due to the fact he was never king or heir to the throne of England. I find it interesting if people would have been so harsh on Gaunt’s character if he had been in one of those positions instead of a lesser son or uncle.

This book really shown Gaunt’s strengths (loyalty to his family and the crown) as well as his weaknesses (pride and his treatment of the lower classes). As well as showing his role in the lives of his father, brother, nephew and son.

What a great biography. So well written and spoken. Answered SO many questions I’d had about John of Gaunt and also unexpectedly, the Wars of the Roses. They now actually make sense, why they would have happened.. 100% recommend this book.

Carr presents a compelling and thought-provoking account of one of the pillars of the English monarchy in the fourteenth century. Gaunt emerges as a flawed but understandable figure balancing personal ambition, familial loyalty and political expediency. Very much recommend

The narration was like a reading of an essay. Nothing new was posited and lots of background to fill in the gaps that every writer on the subject faces. Overall disappointing.