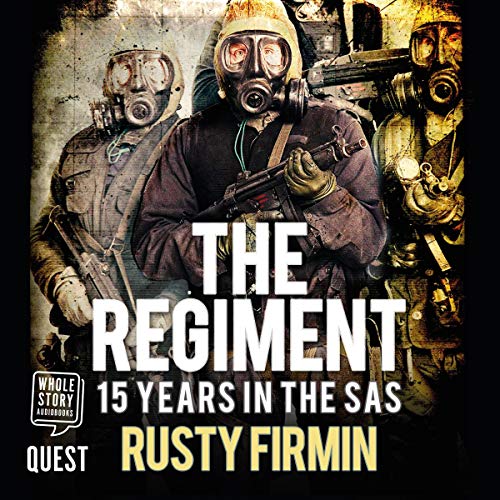 Newly revised and available in audio, this is the unforgettable chronicle of Rusty Firmin’s combat experiences - a fascinating and intimate portrayal of what it was like to be part of the world's most respected special operations force.

From its early beginnings in World War II, the Special Air Service (SAS) has won renown in some of the most dramatic, dangerous and controversial military special operations of the 20th century. It is a secretive and mysterious unit, whose operations and internal structures are hidden from the public eye. Now, one of its longest-serving veterans offers a glimpse into the shadowy world of the SAS. Rusty Firmin spent an incredible 15 years with 'The Regiment' and was a key figure in the assault of the Iranian Embassy in London in May 1980.

What listeners say about The Regiment

Captivating and a unique look

This was an audiobook well worth listening to. The author presented an entertaining and unique insight into the SAS from the perspective of someone who was on the ground and worked their way up from the ground level. The only reason I didn’t give the story a five star is because I think the author had a bit of a rub with authority, which at times illuminated the story of the SAS in an unnecessarily negative light. While Ironically, having read other volumes related to the SAS, I felt he treated the ground participants in the Bravo-Two-Zero incident unfairly given that the “cock-up” of this affair was actually the fault of those that planned and oversaw the operation remotely. B20 operators were basically left for dead and the medals which adorned the chests of the survivors were well deserved. Overall, definitely worth a read/listen.

Straight to the point and riveting all the way through. Thanks for telling it Rusty.

Rusty Firmin is one of the SAS soldiers who raided the Iranian embassy in London in the 80’s when terrorists took hostages inside the building.
This book tells his time in the regiment as one of the finest soldiers in the world. No BS, no fantasy trying to look like a hero or a superhuman. Just the story of an elite soldier, who spent 15 years in the best and most prestigious special forces unit in the world, the British Special Air Service.
Refreshing by its simplicity and the real tone of its story in a time when every special forces operator writes books about being heroes.
Thanks k you for your service Sir and for staying humble and true to your story.

For the target audience, full marks

This book isn’t for everyone. Military lingo, nuances of training, logistics, operational mishaps and the like. Snapshots of policy and a global powers position on projecting diplomacy through firepower and counter terrorism. For those who seek this book for what they already think it to be, it will not disappoint. Really enjoyed the author’s perspective on his service with an incredible unit.

If you're into the world of special operations you will love this one. The narrator is excellent and Rustys storie was excellent as well his accounts of real world events really kept my hooked

As a former US Army Ranger, I highly recommend this book written by a true hero of the British SAS. Great insights on his experiences.

WHAT A LOAD OF SELF LOATHING GUFF

I am a fan of Military memoirs. But some are just a vehicle for the author to bemoan about or (‘Set the record straight’) about fellow servicemen and or authors.
This man certainly falls into that category.
The whole undertone is of him being ‘hard done by’
The story is unremarkable, the narration is appalling.
And there seems to be no discernible ark to his anecdotes.
Do yourself a favour and buy ‘Seven troop’ or
‘The Operator’. Brilliantly compelling, funny and action packed military memoirs that do not make you feel like you listened to a boring, bitter, drunk for 8 hours
and live with the knowledge that you will never recoup that time.

Not the best SAS Book

The story was laboured!
The narrator makes the author sound bitter!
well worth avoiding .

if this was read by someone different It could of been good unfortunately it wasn't, turned it off after 2 chapters

A Great Listen into a Different World

A view into a world the public rarely sees and an insight into what happens 99% of the time when the cameras are not on.

Really good book, thanks Rusty for sharing your story of SAS life. Such a shame how you were treated towards the end. Life goes on

So, before you buy, you need to realise the only real fighting if you like is the chapter on the Iranian Embassy seige. The rest of the book is Rusty as a boy is service in the Artillery and a bit about his (late) entry at the ned of the Falklands.

Theres no real war fighting , in fact theres more stories of in fighting and slagging others off.

There are some interesting parts, mainly gossip on other SAS personnel and an interesting story (for me) on the total incompetence of 47 Air Dispatch Sqn RCT .

The narator also has no military knowledge and doesnt know how to say military units ...

For the price there are better books out there.

Genuine no frills, no holds barred account of life in the regiment. I found Rusty's story, an honest "not for fame or glory" insight into the life of the elite SAS soldier.

I’m aware of Rusty and a while ago, his YT vids popped up on my feed - so had a few preconceptions. Thinking it was all about the embassy, I’d put off buying this book for these reasons … I’d read Andy McNair and Chris Ryan many years ago, I’d done Big Phil Campions story and other names were familiar.

Rusty’s story is far more interesting and wide ranging than I’d given him credit for. Great listen and an interesting few tales. Varied and to the point. Stories may be embellished … I have no idea obviously, but don’t hear anyone shouting as they have about B2Z.

I’d get that man a drink any day.