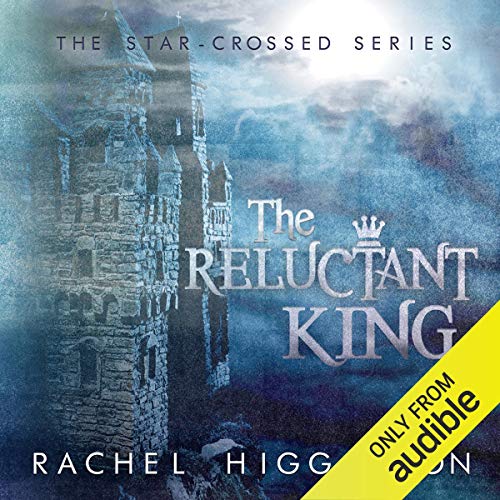 Avalon St. Andrews has endured Hell and war in an attempt to secure freedom and immortality for his people. Raised and conditioned to be both warrior and leader, he now sits on a throne with his sister Eden, governing the Kingdom in peace. While his people enjoy the benefits of his struggle and loss, he is restless, bored and alone.

Avalon is summoned to fight in order to save his people once more as the Kingdom is threatened by a brand new evil. In addition to reigning in a kingship he doesn't want, he is fighting against the very people he has fought so hard to protect. They are determined to throw away their newfound freedom and their newfound leaders.

In this war and in this kingship he feels alone. And for the first time he feels hollow. That is until Amelia Cartier shows up, invading his every thought and shaking up his carefully controlled world.

Now he faces yet another battle - making Amelia his queen.

What listeners say about The Reluctant King

Always refreshing getting the other characters point of view

I’ve listened to the prior books from Edens’s point of view, but I am REALLY enjoying Avalon’s perspective!It’s definitely making me appreciate his character more and it’s a little more lighthearted and a touch of comedic relief here and there (great to balance out the other parts darker than before) the sarcasm and cockiness, more raw and the narrator is on point with everything! I found myself making facial expressions and laughing aloud truly being drawn into the story emotionally as well. Looking forward to the next one!

not bad, not great.

they kinda trick you by saying Bailey Care is still narrating....she does the epilogue. it's the same story but it no longer revolves around Eden. I was hoping for more of her story, but it seems the next few books are about other people with snippets of her. The most annoying part is the fact that you got used to how everyone's voices were and now that are all different. my understanding is that the next book with be different as well and it's a little annoying....

AUDIOBOOK REVIEW:
4 stars — I remember loving Avalon’s book, and while I still enjoyed it immensely (just like every book in this series), I found that while listening to it, I noticed a lot more repetition, and the plot has a hard time moving forward at times. I feel like Avalon and Amelia have the same conversations and the same back and forth multiple times, and I had a harder time fully buying into their love. I totally believed that they could make it there one day, but it definitely had a strong insta-love quality to it.

I will also admit that while I LOVED Josh Hurley as the voice of Avalon, I did NOT love his voice of Amelia. It was…well, it just didn’t work for me. She sounded like an old lady. BUT, he seriously NAILED the snarkiness and just essential personality of Avalon. I don’t even know how to explain it, but he just *was* Avalon. He had great emotion, pacing, all that good stuff. It was just his female voices that were left wanting, but especially Amelia’s. Bummer.

ORIGINAL REVIEW:
4.5 stars — *happy sigh* Which is weird, b/c there is still so much turmoil with that ending. But Avalon….Avalon Avalon Avalon. I was worried about reading a love story about a character that I couldn’t help but see as a brother, b/c of course I made myself into Eden (and thus got to marry Kiran, *sigh*). Would I be able to get behind it? I mean, obviously I wanted Avalon to have his own HEA, but would I be able to fall in love with him after seeing him as the annoying big brother for so long?? And I guess it won’t be quite the same as all my other book boyfriends, but holy wow did I want to be Amelia in so much of this book. So yeah, Ms. Higginson was definitely able to expand Avalon past that brotherly role we’ve seen him in, and into mega adorable, please kiss me like that please, hero of the day. Seriously. So delicious.

I had initial skepticism about Amelia being the love interest of our delicious bad boy…and most of that is b/c in Hopeless Magic when we’re first introduced to her, she’s described as maybe 11 or 12 (to their current 16-17). So I wondered when this book would be set. And while there definitely seems to be a continuity error surrounding Amelia’s age, the gap of 3 years from the end of Endless, and the closer age gap in this book melted my fears. We all knew her sweetness, but OMG did I love her feistiness in putting dear Avalon in his place.

As is in keeping with the rest of the series, the action and suspense part of the plot was beyond compare. I’m still sick thinking about damn Terletov, wondering what exactly he’s trying to accomplish. So yeah, totally LOVED getting back into the action of the world with its new challenges and bad guys.

The humour was beyond compare — not surprising given it is Avalon. LOVED the interactions between him and Eden again.

And finally, and most importantly for me, the love story was just so freaking adorable. And heartbreaking at times.

Yeah, fan girling all over the place over here, but what else did you expect? I just love the worlds Ms. Higginson builds, and the characters that make me wish were real.

Quite the obnoxious outdated "love" story and no real arc to the book. The king was anything but attractive with his obnxioua attitude and actions. Seriously bad.

I really enjoyed the story for Avalon's life. I am happy to also be kept in sync with everyone else as well. I wish the book had covered more of the story after the ambush at the engagement party and I really wanted to hear more about Lilly's fate. I like the closeness that he shares with his sister as well as his family, adopted, foster family. I enjoyed this story but it could have given more.

I honestly found this book pointless. The series could’ve stopped after the 4th book and it would’ve felt complete. This book is based around Avalons love life, THATS IT. It has nothing to do with Eden and Kiran and the story line was so slow to start, nothing happened until the last few chapters. This book should have been an individual one, apart of the Star-Crossed Series. That series to me was revolves around Eden and Kiran, their relationship & the kingdom. I was very disappointed with this book.

I don't know that we needed more after the way the series ended, but it was a nice book and Avalon was awesome and Amelia was even better.

after reading all of the previous books, we are let down by not even being able to see Eden and Kieren's wedding...

Royalty at its most humane

After the bad King has been killed and the twins take over the throne, one is married to the ex-king's son, the other discovers he really can fall in love. But happily ever after lasts no time at all, as the bad guys are hard at work. Exciting, fun, a continuation of the series that holds up. Literally...

As always I loved this book. I was a little confused that baily wasn't reading this one too, but I loved it just the same.