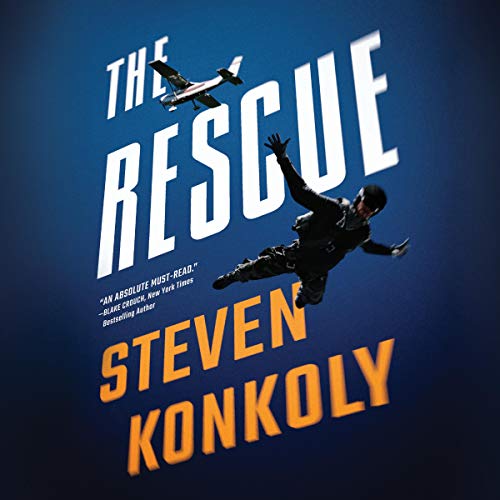 For fans of Tom Clancy and Lee Child, a heart-pumping thriller of betrayal, revenge, and conspiracy by USA Today bestselling author Steven Konkoly.

Former CIA operative turned mercenary for hire Ryan Decker’s specialty is rescuing kidnap victims. Hired by an influential US senator to liberate her daughter from a human-trafficking ring, Decker never anticipated sabotage or that the assault could go so disastrously wrong. The hostage is dead. His team is wiped out, and so are their families, including Decker’s own wife and son - eliminated one by one by the Russian mafia. And he’s survived to take the fall.

When he’s inexplicably freed soon into a ten-year sentence in federal prison, Decker suspects another setup. And private investigator Harlow Mackenzie knows he’s right. She has evidence that a power greater than the Russian mob was behind the raid that ruined Decker’s life.

The next move in a nationwide cat-and-mouse game of high-level sedition is up to them. Fueled by revenge and an obsession to clear his name, Decker has only one mission: to destroy a growing conspiracy before it’s too late.

“The Rescue by Steven Konkoly has everything I love in a thriller - betrayal, murder, a badass investigator, and a man fueled by revenge.” (T.R. Ragan, New York Times best-selling author)

What listeners say about The Rescue

It's an okay book

If there is a book 2, I might listen to it but I wasn't impressed nor could I recommend it.

If you're looking for a psuedo-spook shoot-em-up, this isn't bad. The characters are kinda one-dimensional and cliche and the plot isn't particularly creative but it has all the classic Mack Bolan elements: a tough-guy protagonist, amoral arch villian, semi-techincal descriptions of weaponry, and night parachute insertions.
The narration is very well done and carries what could have been a total dud into a somewhat enjoyable listen. Not terrible but I won't be buying the rest of the series.

I don't get the hype.

Story is a protracted cliche, and is not very well written. All things considered, a very mediocre book, with mediocre narration. May very well return it.

I tried really hard to finish, but just couldn't get past the narration. The narrative was monotone and the ruggedly-handsome and terrifically skilled operative sounded like Howard Stern with a cold. Not a good look. Interestingly, the voice of the female character was much better.

If the story had grabbed my attention, I might have suffered through the narration or moved on to read the book. However, since the second book in the series has the same narrator, I think I'll pass on this series.

I have a lot of Steven Konkoly titles in my TBR pile. I’m almost embarrassed to admit that I have more on my TBR than my actual read pile. But I kept hearing about this book. Numerous of the other authors that I follow were talking about how good this book was. I’m glad that I fell into peer pressure. The Rescue is the real deal. Konkoly is a fantastic Thriller author and The Rescue did not disappoint at all.

Sometimes I feel like I’m spoiled with books. When I get a couple of back-to-back 5-star titles I start to feel this way – but The Rescue was the real deal. I enjoyed it from beginning to end and I was completely invested in each character (especially Decker).

The Rescue introduces a slew of new things considering its book one in a new series. We’re introduced to Ryan Decker who reminded me a little bit of Tom Clancy’s Jack Ryan mixed with some Jason Bourne along with a few others sprinkled in there for good measure. We’re introduced to him only to find out that he’s been arrested and put away (and not told why until later in the book). The rest of the story is him trying, not only to exonerate himself but also trying to put the real bad guys behind bars (or in the ground) for killing his friends and family.

Pretty much everyone else we meet is essential to the story but are also spoilers if I speak too much about them here. But know that there will be a kinda-sorta-beat-around-the-bush love interest and also a complete bad-A female who helps Decker out of some jams. You also have some old friends and some people “back from the dead”.

I loved The Rescue and I had an absolute blast reading it. It’s one of the best thrillers I’ve read in 2019 and I cannot wait to see what else Konkoly has in store for us and Decker.

Love the story....Hard to listen to Narrator

Great book and story. Excited for more to come. Would listen again because characters are so good but man I hope they replace the Narrator. It was a painful listen.

For me a narrator can make or break a story. I could barely stay awake with his monotone, even the change of characters were grating. But the story was good. I usually return books with poor narration, but plowed through this one.

Thoroughly enjoyed this book. Loved the main character; especially loved the strong female characters. Looking forward to next book in series. Discovered this kindle book via Amazon's 1st Read Program. The author is now on my radar. Narration was very good.

I was lucky enough to win a copy of the Rescue in which I added on the audible version and I’m really glad I did. The story is interesting and engaging from start to finish. There is a good mix of action and plot development throughout to keep the listener interested without losing momentum. While the plot doesn’t have a ton of twists it has a few so be on the lookout! The characters are interesting and complex. I can’t wait for the next book in the series!

The narrator does a good job with the various characters and bringing them all to life.

Not even close to Clancy

This was some of the most predictable copy and paste writing and performing I have ever heard. I finished only because I had wasted a monthly credit on it. The main character is so dull and the performance is delivered the same way that he could almost be measuring up for carpet fitting let along fighting 30 suitably anonymous bad guys. There is nothing new or fresh here at all as the plot is so loose its held together with string. I can't write anymore on this it's already occupied too much of my time.

My first book by this author. it won't be my last.

Although the story followed fairly predictable lines it nevertheless was engaging. The main protagonist was 'likeable', in a ' hardman' way.

great story, exciting and looking forward to reading/listening to the next in the series. character are great

I have listened to many audio books, but this narration is the worst I have ever heard. There is no difference of voice between the various 'actors'. His voice is so monotone, I want to go asleep! I will never listen to a book that is read by Thom Rivera again!
And to add to the pain, the story line is fairly mediocre.