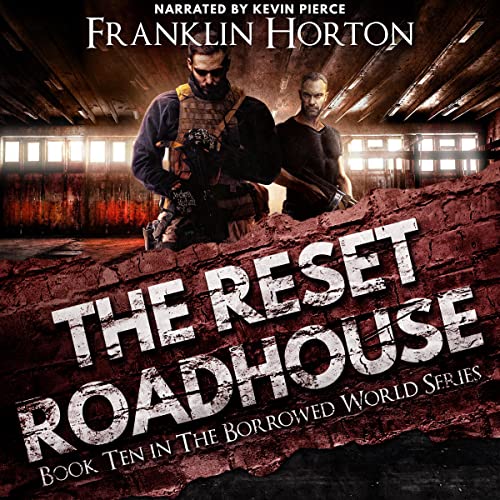 It was a hard-learned lesson but Jim Powell finally understood that isolating his group of friends and family was no longer the best idea. It was a strategy that had once kept them safe, but lately seemed to be doing exactly the opposite. Staying out of town and away from people had led to them missing critical intelligence—that there were people in their community actively plotting against Jim.

By having some of his people operate vendor booths at the burgeoning apocalyptic marketplace growing in town, they'd been able to learn who was conspiring against Jim. In true Jim Powell fashion, he'd taken them all out. Now understanding the value of having eyes and ears at the marketplace, Jim decides to act on an idea proposed by his friend Lloyd and open a roadhouse in a vacant building in town.

For Lloyd, it would be a place to play music and sell liquor made from family recipes. For Jim, a bar in their community would serve several purposes. It would allow him to provide employment for the people in his group, breaking up the routine and giving them a sense of purpose. It would also allow them to run a trading post, bartering off items they didn't need for items that would be more useful, just as they'd done at the public market that summer. Finally, it would be a way for Jim Powell to keep a finger on the pulse of his community, cultivating intelligence assets and keeping tabs on everything happening around them.

Even as Jim and his people work to open the roadhouse, they have no idea what's happening outside of their community. They know little about the war going on between political factions of their own government. They also have no idea that a great upheaval is about to take place that will change the course of the nation forever.

What listeners say about The Reset Roadhouse

There is no other author who has perfectly tied together different series like Franklin Horton. Seriously hours and hours, probably over 100, of all his books that tie together. Hands down my favorite!

Another great book from Mr. Horton. Unfortunately I went through it too fast.. Now, the sadness of waiting for the next.

That was a wasted audible credit. I thought I'd be safe getting a Franklin Horton book as he is one of my favorite post apocalyptic authors. This book went on and on about building a roadhouse without much action well maybe a few pages but mostly ho-hum. Just don' expect the quality and excitement of the other books in this series.

Cannot top this duo. Has kept this series interesting and a audio “page-turner” through 10 books…and counting??? (I hope!)

Great pace and character development which is consistent with all of the author’s books! You would not need to read all of the other books in the series to enjoy this story, although I highly recommend it. There is Easter eggs in this book that will mean more if you read previous books and the author’s other series. It ties in beautifully and is something that I always look forward to. Kevin Pierce delivers a brilliant performance as usual. Great job all around!

This one was a little tamer than the rest but that's okay. It tied up some loose ends that needed tying. Mr. Horton always puts a lot of thought and details in his characters and when you get this far into a series, well, you know them on a personal level and you're invested.
As always, Mr. Pierce bring life to these characters and adds another excellent performance! Thank you gentlemen!

One of the best storytellers of our time, each of Franklin Horton’s books is like putting on a comfortable pair of old boots. Smooth, funny and definitely interesting. The worst part of his books is they are over too quickly. Kevin Pierce never disappoints either. He brings each book to life. I highly recommend Reset Roadhouse!

Love the narrator. love the author It's great

I'm never disappointed when I listen to Kevin Pierce narrate a book. it also helps that the author of these books is fantastic

I love this series so much, and this book is one of the best! Many laugh out loud moments. Don't want to put any spoilers in here, but I'll say, great character development and some real surprises.

loved the whole series but this book had a little more finality to it though rocked and rolled with action and twists as always. feel q bit bad for the good guy leading the show that gets nothing but insults from everyone around him. Many times mid read I mumbled chuck your towel in and tell them to build their own dam bar! Great book from a great author and super narrator as always gold stars 🌟 for both!