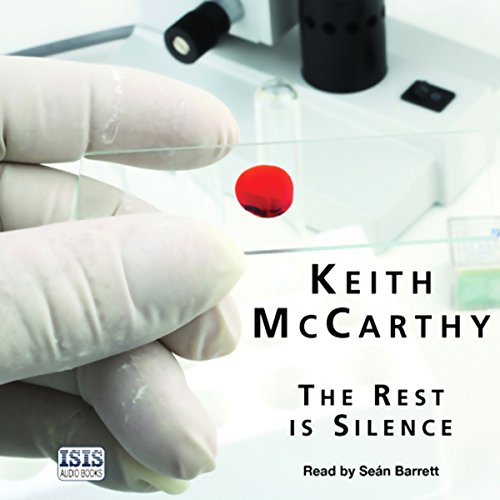 A young boy's body is washed from the river and forensic examination reveals he has been murdered. The accidental discovery that a convicted paedophile lives in the nearby village leads to police interest in his activities, and when five decaying bodies are found in his garden, he is arrested.

Helena Flemming is called in as his solicitor, but busy on another case, she asks John Eisenmenger to travel to the crime scene. And there he discovers the abuse is far more grotesque than previously thought - beneath its idyllic surface, there is a far darker side to the village.

What listeners say about The Rest Is Silence

I enjoyed this book immensely, I approached the genera with some trepidation as murder mysteries; are not my first choice, however when I saw that Sean Barrett was the narrator I thought I would give it a try. I was not disappointed. Barrett's representations of the characters dialects were, as usual perfect and the pace, pitch and tone of his narration was exquisite.
McCarthy dealt with this disturbing plot with sensitivity and developed the various characters through clever and intelligent dialogue. Many times I caught myself laughing aloud at the extremely humorous way McCarthy used his literary skills to sketch the characters foibles and shortcomings.
I highly recommend this book to anyone who enjoys an intelligent book well read.

This series is extremely well-written and character-driven (as opposed to plot-driven). The prose, including excellent and intelligent dialogue, suggests once again that the Brits are superior in writing mysteries for those of us who are more interested in psychology than in car chases and gun battles. Anybody who likes Elizabeth George (Admittedly American) and PD James will like this author.

took a while to get into it, but worthwhile

This is my first Keith McCarthy novel; it had a slow start, but I grew to like the characterizations and the pacing, and it was certainly worth sticking with it. One of the main characters is a pathologist, so there are some gory descriptions - but they are just brief descriptions of the work, not indulgent glorification of gore or violence, and I didn't mind them at all. One of the things that stood out for me as a first-time McCarthy reader was the layers of his characters and his inclusion some things (like office politics) that other writers might leave out as peripheral to the plot.

As for the plot, this book is essentially a "murder in a small English village" standard, but done with modern tools and motivations, in not characterizations: There's the dotty grey-haired widow who likes to gossip, the rich farm-owner and his showy wife who have staff to run their farm, the struggling farmer and his hard-working wife with marital problems, the bartender who seems to have more income than a simple bartender should, and the mysterious stranger who rents a local cottage trying to hide from his past.......all together in a quaint village where 6 bodies have been discovered within a week.

Another great novel from Kieth. Sean Barrett is an expert narrator. Kieths books should be listened to in sequence so that you don't hear what happenned in a previous book that you haven't listened to yet. Google to find out when each book was released.

This book rambles, on and on and on... It takes forever to even get started on the actual story. The writer spends too much time telling what each character is thinking, normally not having a thing to do with the story.

Once it got to the story line, it was a decent plot. I just wish there had been more to it. I found myself wanting to fast forward through a lot of the 1st half of the book to get to the actual story.

It flip-flops back and forth between several scenes so if you don't have time to listen to large portions of it at the same time you tend to get lost.

I enjoyed this book immensely, Sean Barrett is an excellent narrator.
McCarthy dealt with this disturbing plot with sensitivity and developed the various characters through clever and intelligent dialogue. Many times I caught myself laughing aloud at the extremely humorous way McCarthy used his literary skills to sketch the characters foibles and shortcomings.
I highly recommend this book to anyone who enjoys an intelligent book well read.

This is a great story, really well read, and kept me completely hooked until the end. The subject was gritty and pulled few punches. If you like books in this genre - then you will love this. Will watch out for more from this author.

Another great forensic pathology based tale from Keith McCarthy with the always perfect support of Sean Barrett. This is a really good series - a cut above your average crime novel.

Very, good listen, I was gripped. However, I felt that a little too much sympathy was shown for the main suspect. Mrs C, what a character!

I have enjoyed all the other titles in this series, but this one did not hit the mark for me, I found Helena really irritating and did not find the supporting characters in this book as strong as previous ones.
Will read the next one when audible get it as I am sure this was a one off "bad" for me

Loved this book. His prose is exquisite and this makes the characterization incredibly strong. Sean Barret's reading is also exemplary. The plot construction was well paced and the characters were flawed just enough to create genuine interest without necessarily relying on association or disassociation.

Twists and turns. A superb thriller

I love this series and this book did not disappoint. Excellently drawn characters, superbly narrated as ever by the wonderful Sean Barrett. A gripping thriller.

Very annoying that there are no chapters.

Good story.
Accomplished reading as always by Sean Barrett. Kept losing my place though cause chapters were cut mid sentence.

Really enjoyed this book and it kept me glued to my seat. It's a dark twisty turnny book involving realistic characters who come alive thanks to SB's narration. One of the characters (no spoilers) reminds me of an old neighbour of mine!

Anyway bought as a BOGOF and well worth my time and dosh!

The Rest is Silence - great read

Not in the same class as Karin Slaughter or Val McDermid but very enjoyable. Will definitely seek out more books from the author.