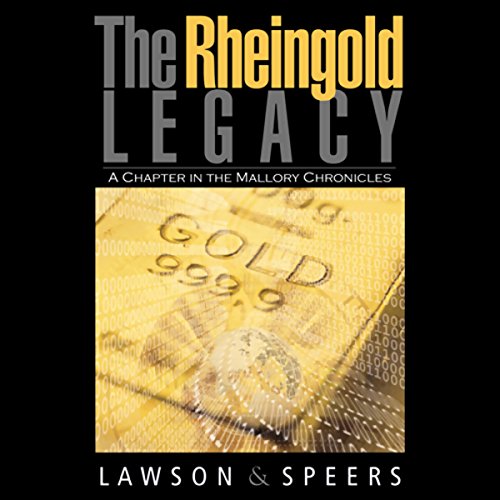 The president orders Captain Deke Mallory to penetrate a mysterious brotherhood of Neo-Nazi billionaires. They've financed a coup d'etat in Central America to begin their takeover of the Global Monetary System.

Computer-based trading has long since replaced the Gold Monetary Standard. But the Geschaft's shipload of Nazi Gold from behind the former Iron Curtain will rule - once they turn back the clock with super-viruses that destroy computer languages. Juggling flight testing of the 21st century Joint Strike Fighter aboard USS Ronald Reagan with undercover missions ashore, the TOPGUN naval aviator is suddenly plunged into an unfamiliar world where wits are his only weapon. With pressure mounting from the CIA's top spymaster, a cunning president, and the admiral aboard the carrier, the future of the civilized world suddenly depends on Deke Mallory's unauthorized actions.

What listeners say about The Rheingold Legacy

After listening to a couple of hours of listening, I have no idea whether this is a good book. I do know that it's a terrible audiobook.

The narrator is horrible. This is a American military mystery/thiller. Why would they choose a bad British narrator who has terrible phrasing, has no clue of what words or syllables to accent, and apparently has no clue what most of the slang terms mean?

I would like to listen to this book with a talented reader narrating it but since that isn't available, I would say... Don't buy this book!

FYI... I have purchased well over 100 audiobooks on Audible.com over the past few years. This is the very first time I am giving a negative review.

The story line is interesting but the reader is the worst I've ever heard. His mispronunciations and bad timing are so distracting I barely finished listening.

It was ok.... but not worth it. It had an ok plot but there were tons of undeveloped threads that, after reading, i was very disappointed that the author did not develop.

The narrator was also very bad, and when you listen to a book for over 16 hours it is quite important.

Not worth the read

Narration is impossible. Stay away. If the story is good, you will never find it, because the reader is much more important in his interpretation than the author.

narrator is less than 1 star.

30 seconds in and i hate the narrator already. unbearable. any chance of a refund?