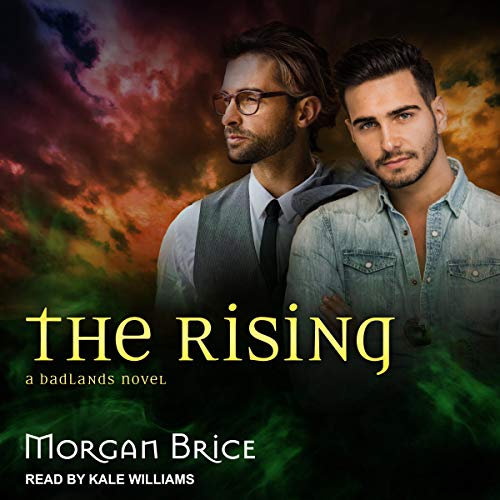 A big storm is brewing, there's a killer on the loose, and the ghosts of Myrtle Beach are restless. Psychic medium Simon Kincaide and his sexy cop boyfriend, homicide detective Vic D'Amato, have their hands full helping the Grand Strand brace for rough surf, driving rain, and high winds as a winter storm roars toward shore.

Everyone's on edge, and rumors are rampant about sightings of Blackcoat Benny, a ghostly omen of danger, and worse, the Gallows Nine, the spirits of nine infamous criminals hanged back in the 1700s, a harbinger of disaster. Rough tides wash the wreck of an old pirate ship into shallow waters, high winds threaten to damage an old mansion with a dark past, and the citizens of the beach town hunker down to ride out the storm.

As the skies grow dark and the sea turns wild, several men from prominent local families end up dead under suspicious circumstances. Simon's premonition confirms Vic's gut feeling - the killing is just getting started. As Simon tries to reach out to the spirits of the murdered men to help the investigation, he's attacked by malicious ghosts that don't want anyone getting in the way of their long-overdue vengeance.

What listeners say about The Rising

I just recently discovered the growing Badlands series by Morgan Brice and I've been like a kid in a candy story. I've burned through all three Bandland books on here in less than two weeks, thanks to a lengthy daily commute to work. Vic and Simon and so adorable together and I just love how they have grown to open up to each other as they navigate love, working together, and the things that keep going bump in the night.

The narrator does a fantastic job telling the story and handles himself very well with those steamy love scenes.

I truly hope there are more adventures for Vic and Simon to come to Audible, I wanna see those two get hitched! I highly recommend this series to anyone who appreciates supernatural fiction with a M4M storyline. PS, it's about time quality work like this was out there. Keep 'em coming!!!

Awesome and absolutely fantastic. I love the series and I hope more books will be coming out ASAP. I love the two main characters, Simon and Vic. Their romance is sooo beautiful. Their constant concern for each other's safety is wonderful. The secondary characters are also interesting . Kale Williams did a good job in bringing the characters to life. Excellent story by Morgan Brice and the actions are simply fantastic. Bravo. So glad I found this series.

Narrator Kale Williams is perfect for this series!

In the first book of the series, Sebastian "Simon" Kincaide solves the case of the serial killer and leaves the evidence for homicide detective Vic D'Amato and his partner to follow up on as he decides that tackling the perpetrator is his job to do. He goes head-to-head with the madman and only manages to survive when the ghosts of the murderer's victims band together to exact vengeance. The captain of the Myrtle Beach police department, in addition to several others on the police force, is convinced that the paranormal exists and that Simon's psychic talents are authentic. Simon is offered a position as a consultant for the police department, making it possible for him to work more directly with Vic for those murders linked to supernatural activity.
In 'The Rising: Badlands Book 2', the folks of Myrtle Beach are whispering about the sightings of the spirits of Blackcoat Benny and also the Gallows Nine that was hung in the 1700s for murder and piracy. As a presage of disaster, folks are expecting winter storm heading for the Grand Strand to be one resulting in extensive property damage, personal injuries, and some mortality. When the rough tides wash an old pirate wreck into shallow waters, murders start to occur around the town. Working as a team, Vic's standard and Simon's paranormal investigations determine that the victims are descendants of the officials responsible for having the Gallows Nine executed centuries ago. The malicious spirits were exacting revenge for the officials' willingness to overlook the man that the members of the Gallows Nine worked for--a rich, entitled, and well-connected crook who went unpunished all those years ago.
In addition to all the other very scary and delightful frightful content, the writer includes a connection for Simon with a male ancestor who is a weather witch who is able to make use of Simon's corporeal existence to do battle with malevolent spirits. As was the case with Badlands, this novel features great world-building, spectacular character development (even the ghost does some growing, for goodness sake!), with extraordinary pacing and outstanding balance making this another page-turning addition to the series. Give yourself plenty of time to read the book from start to finish in one sitting as it is nearly IMPOSSIBLE to put it down!

I love the relaxed between the to main characters. learning to trust one other. Knowing both of their jobs come with danger.

such a great story with some steamy moments. Love the Paranormal element and the cop elements as well

It took me a couple of days to think about this one, before writing anything down. First, I want it said, this has been my favorite in the series so far. And if you are just going by numbers, two doesn't seem like a lot. However, Brice is always writing and adding a story here and there. Vic and Simon are very busy boys. So, if you want to be in the KNOW, join Brice's newsletter (I promise, you will not be spammed by her), and find where she hides all her lil nuggets.

My Granny, and one of the wisest people to ever live was a firm believer in a great many things. I wish I had listened more and soaked up more of her wisdom. **sigh...Hindsight and all that. One of the things she believed in was generational curses, and the woman could spot them from a mile away. Some people would ask for her help and some people balked. It's like anything I guess, you can only help those who ask.

In the case of The Rising, thankfully someone did ask. Unfortunately for others, it came too late.

Winter storms aren't heard of off the East Coast in the Atlantic, they just aren't as prevalent as storms during Hurricane season. When they happen, they can be quite explosive.

As Myrtle beach prepares for one such storm, Vic and his partner become inundated with what seems to be suicide victims, while family members of the victims declare otherwise.

In the meantime Simon is asked to do a walk through of an old home that goes back to the time of the Revolutionary War. The home is being given a face lift by a development company, but the construction crew working the site keep coming across strange things, some feel quite sinister to them. The foreman calls on Simon knowing if anyone can help, he's the guy to do it.

Between Simon's visions, dreams, what he experiences at the house renovation, one of the suicide scenes, and after talking to someone about a shipwreck recently found (thought to have belonged to pirates from centuries ago), everything is gearing up for the "Perfect Winter Storm."

This was ghostly swashbuckling paranormal action from beginning to end! I freaking loved it! There is no lag, no fluff, no filler, just good old supernatural goodness, oh and some HAWT HAWT sMMexy times between my favorite MB couple, Vic and Simon. Those two guys just keep getting more and more awesome too.

I love Vic and Simon and don't find them boring or tiresome, because they worked through their junk in book #1, and while they know they love each other and are an established couple they also haven't jumped into the marriage bed either. They are just enjoying things, and know that's where they will end up, eventually.

They worry fiercely for each other every day they are apart, and do what they can to protect one another, but they don't nag, or try to keep each other from doing what they feel called to do. I love that so much.

As I stated earlier, this has been my favorite so far. Loose Ends, the next installment in the Badlands Series, has some big shoes to fill.

If you can listen, the audio books narrated by Kale Williams are exceptional!💖

Another Entertaining Story with Simon and Vic

Book 2 in the Badlands series and we are back with Simon and Vic. I am beginning to really like this couple, Simon with his psychic gifts and Vic the cop, they make a really good team and are so protective of each other.

In this book they now live together and have been a couple for almost a year. At the start of book 1 Vic was definitely a cynic when it came to the afterlife but by the end of the book he couldn’t not believe. Now Vic is on board with all Simon’s gifts and Simon helps the police with anything “hinky”. We meet all the interesting characters from the last book plus some new ghosts. These ghosts are pretty scary with evil intent and the mystery all centres around pirates, a sunken ship, 9 pirates who were hung and an evil landowner who has no intention of relinquishing his estate. It is coming up to the 250 year anniversary of these events and a terrible storm is forecast for Myrtle Beach moving the wreck and starting a chain of events.

As usual Simon has his band of unusual friends, all with their own gifts, watching his back and help from an unexpected source all helping to make this another entertaining book.

Sweet Couple, Just What I Needed

The corny-cuteness of this series was just what I was in the mood for today. Plus Kale Williams' narration seriously hit the spot. Comfort listen, yep perfection.

An enjoyable series with likeable characters and good narration. Looking forward to the next book.