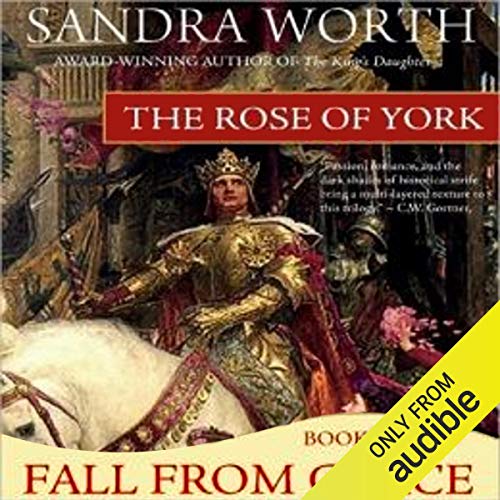 The Rose of York

Defying Shakespeare's portrayal of Richard III, this well researched novel completes The Rose of York series -- winner of a remarkable ten awards, including first place pre-publication prize in the 2003 Francis Ford Coppola-supported New Century Writers Award for Best Emerging Writer. Set in Malory's England, it traces Richard's remarkable reign, his passion for justice, his undying devotion to Anne, and the unresolved mystery of his nephew's disappearance. A stirring saga of courage, sacrifice and love.
©2008 Sandra Worth (P)2012 Audible, Inc.

Sandra Worth takes us into the mind and heart of Richard III, that much maligned king of Shakespearean fame, and gives us an entirely different interpretation of his character than has been traditional for hundreds of years. Beyond that, she writes a great story. I was pulled along by her beautiful prose every step of the way, and by the last part of the book, which depicts the rather sad end to which Richard comes, I felt as if I had truly lived through those terrible times with him. This is an engrossing listen, particularly after hearing or reading the first two books of this trilogy-- in fact, as proof of their addictive power, I admit that I listened to all three volumes in three days. Don't miss a single one !! Highly recommended for anyone who enjoys truly great historical fiction.

I'm not ignorant to the fact that most authors take artistic liberties when it comes to these types of books. Rather than picking apart an author for historical errors or biased opinions, I judge on whether I enjoy the story and the writing style. The Woodvilles and Tudors are completely vilified with no redeeming qualities, but I chose to ignore it. I imagine that's exactly how the Yorks felt about them. I liked the narrator, the story and the style of writing. I would read more books from this author.

I was hoping for a better opinion of King Richard, however, this series portrays him as a sniveling, pitiful, idiot unable to make a logical decision. I am a member of a book club with 37 members whose passion is historical fiction and nonfiction and we all agree the former accounts at least elude to the fact he had a brain. I thought the was supposed to be a more favorable representation but am sorely disappointed. Poor ignorant childish naive King Richard the idiot! This author did his memory no favors!!

Dick the Bad....Maybe not so much

What made the experience of listening to The Rose of York the most enjoyable?

Told from the point-of-view of Richard III and his wife.

What does Robin Sachs bring to the story that you wouldn’t experience if you just read the book?

Made the story come to life. Excellent job.

Who was the most memorable character of The Rose of York and why?

Richard III King of England and his wife are portrayed with much humanity. They did not have an easy life and it is possible that when Shakespeare wrote his play Richard III he gave it a pro Henry and Jasper Tudor slat for the grandchild of Henry VII. Maybe Richard III was not the villain he was made out to be in his life-time.

Yes, if the friend likes historical novels. I myself am not sure whether I do or not. In most historical novels of the past (the great ones such as Manzoni's Bethrothed, Tolstoy's War and Peace), the protagonists are minor personages who can be invented at will, so you have have a great story and become really engaged with the characters without having to ask too many questions regarding major historical figures. However, when the story centers around a man such as Richard III, there is the inevitable question regarding historical veracity: to what extent is such a version of the man or woman in question plausible and in conformity with what is recorded? The novelist's first duty is to create a story that convinces, and in this Sandra Worth succeeds admirably. Her Richard III is a tragic hero come to life. He is very moving, and gets our sympathy (apart from exasperation at his passivity at the end). And I would like, very much like, for Richard III to have been this man. BUT, I don't know. Judging from the changes that were effected during his short reign, one might think it plausible. And given the extent and nature of Tudor propaganda, it certainly seems possible. But was it really like that, or anything close? Were the Rivers really such a bad bunch, or quite different? Was Henry Tudor really so loathsome (records would seem to give some credence to this)? Many such questions beset me after listening to this novel, and I do not have the time or inclination to finding answers. So this could be the last novel of this sort that I will read: I am tempted to stick to non-fictional history. But as a novel, this one is quite good.

The portrayal of Richard III as a noble, tragic character who was not able to overcome the adversities that frustrated his good intentions. He would have had to be far more ruthless, among other things.

Which character – as performed by Robin Sachs – was your favorite?

The Tragedy of the Good King

Robin Sachs reads well, but I did not like his way of histrionically deepening his voice every time a man spoke. If one must bring out the direct speech, I would prefer different mean such as speaking with greater expressiveness.