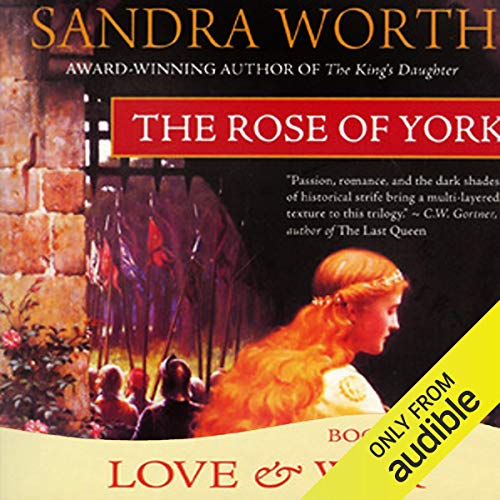 The Rose of York

Set in Malory's England during the Wars of the Roses, this acclaimed winner of a remarkable nine awards tells the true story of two star-crossed lovers - Richard of Gloucester and Lady Anne Neville - before they become King and Queen of England. A stirring tale of romance and intrigue.

I read the three volumes in this trilogy (or rather, listened to them) back to back and I am writing this little review after finishing all three-- and that's because this trilogy is a "could not put down" listen. I have read many historical novels set in the period of the so-called "Cousins' Wars" (AKA the Wars of the Roses) and before I began this trilogy I really doubted that anyone, and perhaps particularly a writer of historical fiction, could shed any new light on the events of this time. But Sandra Worth succeeds there, and also weaves a spell around these historical characters which makes all seem new again. As a passionate lover of historical fiction, I can recommend this entire trilogy as a great read !

What made the experience of listening to The Rose of York the most enjoyable?

I like a different version of the evil Richard III than Shakespeare.

I liked the story about Anne and Richard but the middle of the story gets bogged down with Edward and Elizabeth Woodville.

What does Robin Sachs bring to the story that you wouldn’t experience if you just read the book?

Anyone reading the book for me lets me do my housework while listening.

Who was the most memorable character of The Rose of York and why?

Richard III because his story is so different from the evil version of Shakespeare's. I love learning about his devotion to Anne and his brother the King. I also thought the part about Warwick's brother and his wife was quite interesting.

I will probably read more of the books by Ms. Worth, but am not really sure.

Where does The Rose of York rank among all the audiobooks you’ve listened to so far?

I enjoyed the book very much. I have been interested in Richard III since his grave was discovered in 2014. Although I suspect the portrayal of Richard III may be far too soft and flowery, the book is entertaining and I will read another on the same topic.

What was one of the most memorable moments of The Rose of York?

The death of Galahad in the stormy sea.

Which character – as performed by Robin Sachs – was your favorite?

I was touched by John Neville's letter to his wife, written just before he died. It made me think of warriors, of any culture, having tender feelings for the women who wait for them to return.

I don't know if Richard III was as saintly as the character Sandra Worth has created in this book. Maybe he was! Or, maybe the real Richard was more like the villain portrayed by Shakespeare and other writers. At this point in time, it is unlikely we will ever know.
I am an American with just a light knowledge of the history of England. When I read books like those in the Rose of York series, I always find myself Googling the characters to learn more. I did find it very interesting to look up characters such as the Nevilles, the Warwicks, etc.

Skip this!! Read Kingmaker's Daughter instead!

I thought the book had good points, but it was very disappointing. I have read many books on the subject of Richard III, nonfiction and fiction. This is my least favorite. The total vilification and spurious attacks on the Woodville family was shocking.

This is a fairytale version of the story. It's not good historical fiction!! In fact, I would recommend reading books 1 and 4 of Phillipa Gregory's Cousins War series before touching this. I'm not a fan of PG, but her work on Ann Neville and Elizabeth Woodville is far more touching and well-researched than this book.

With nearly each novel, I have to get used to the narrator. With this one, I was iffy at first, but then found that I liked his deep, gravelly voice. I enjoyed the story and the writing and am moving on to Book Two.

Performance terrible. Could not continue.

The performance was stilted and had no rhythm. The sound seemed muffled. I can't comment on any areas as after 1 hour I could not continue.
Very disappointed. What a waste of money.

Fabulous, riveting, hard to put down.

Sandra Worth is such a wonderful writer and Robin Sachs is amazing. I highly recommend her books.

I love historical fiction, but found this book a little far fetched. I thought the narration was flat but intend to give it another listen. I found my mind wandering a lot while listening.

I used last months two credits for this book and The Iron King series book 1, I liked this one far more than the other. I am a huge history fan and like to mix it up with some fiction every once in a while. The whole point of fiction is that it can be anything. This made me look at Richard in a different light and I like that it has made me rethink my opinions. I like being able to see other peoples views and this book let me do this in a way. The story was smooth and narration was really well done. I am ordering the other two this month and will post a review more in depth once I have completed the series.
If you are the type who wants all the history straight and 100% this is not for you. This is a book that fills in the gaps that history cannot tell us with one possible story. It is well written in my opinion.