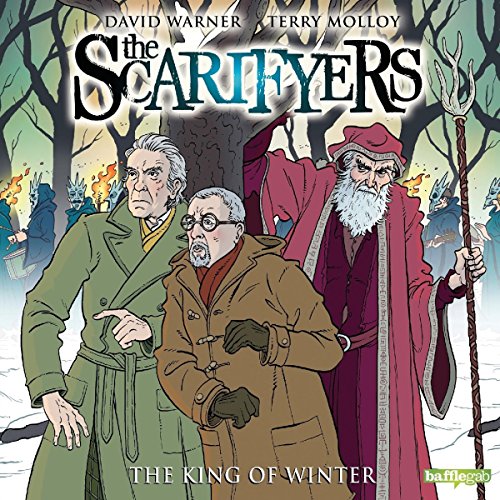 The Scarifyers: The King of Winter

The Scarifyers is a series of rip-roaring tales of comedic supernatural intrigue set in 1930s Britain, distilling the likes of Dick Barton, The Avengers, The Devil Rides Out and Quatermass into cracking new audio adventures.

The Scarifyers is broadcast on BBC Radio 4 Extra, and has been described in the national press as "a slice of audio perfection," "the smartest and most enjoyable thing on British radio," and "like Tintin but with the lights out."

This is the ninth Scarifyers adventure, and stars David Warner (The Omen, Time Bandits), Terry Molloy (Doctor Who, The Archers) and Guy Henry (Holby City, Extras).

Midsummer, 1938. When a train porter is frozen to his living room chair (then nearly crowned Miss Croydon), MI:13's Harry Crow (David Warner) and Professor Dunning (Terry Molloy) are on the case. But what links the unfortunate porter to the equally glaciated peer-of-the-realm, Lord Trumpley?

MI:13's investigations lead them to an exclusive gentleman's establishment, the Tartarus Club, whose membership appears to be rapidly dwindling. What is the secret of the Tartarus Club? Why are the villagers of Thornton Gibbet afraid of a 300-year-old ghost? And why is it snowing in June? As everlasting winter sets in, Crow and Dunning find themselves pitted against their greatest foe yet... the King of Winter.

"Picture a pre-WWII 'X-Files'meets 'The Odd Couple' and you won't be too far off the mark... sharp as a blade, with a combination of frequent thrills and well-judged humour moving the story along at a cracking pace... exactly as good as 'Scarifyers' fans have come to expect." ( British Fantasy Society)
"The cast are superb... a delight from start to finish. For the show's many fans, this is another release to savour." ( STARBURST Magazine)
"David Warner and Terry Molloy make a terrific duo... Worthy of repeated listening,this is rousing comedic fun." ( SFF Audio)
"The inspired lunacy of The Scarifyers is at full tilt in their latest adventure... another fun outing for Britain's surprisingly successful secret agents." ( SCI-FI BULLETIN)

What listeners say about The Scarifyers: The King of Winter

This was pretty much what i had hoped for; a fine combination of British absurdity and witty cultural/political satire with smart, funny references to prior comic masterpieces from Shakespeare (with great jokes about over the top productions of Shakespeare and their all being blamed on women directors) to Father Ted. Wish i knew who voice actors are-- one sounded so like John Cleese, but surely he would be noted, yes? In any case, VG.

Dont bother buying this. I I love Brigadier Lethbridge Stewart.He's missing from this. I'm referring to Nicholas Courtenenay. This was an extension form the series which should have just stopped when he passed away.IMO.

I thought that this was Totally fabulous, humorous and utterly giggle worthy. I would whole heartedly recommend this to anyone who needs to sit back and be entertained.

have followed all the scarifyers tales, this one maintained the enjoyment standard I've come to expect

The Wicker Man meets the Carry on team

Great, spooky, fantastic fun. In the style of vintage BBC radio plays of the 1950s-60s. Hope audible bring out the last in this series. Love it

Funny, silly, and clever. I loved the tale and the acting. The character of the duke of Kent had me howling with laughter, especially when he took to the stage in the merry wives of Windsor. Light hearted and witty--enjoy!

Not quite the best of the series but...

last one and done. finally listened to all if these. fun stuff for sure