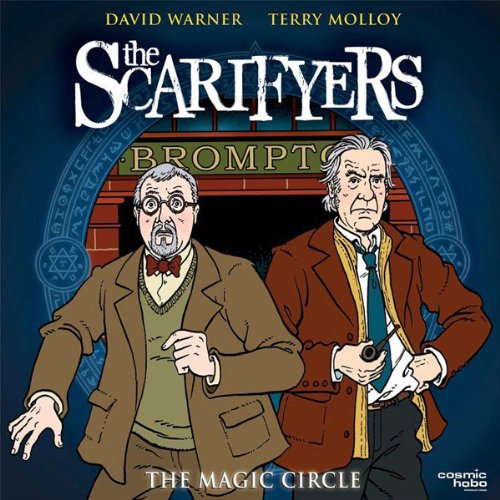 The Scarifyers is a series of rip-roaring tales of comedic supernatural intrigue set in 1930s Britain, distilling the likes of Dick Barton, The Avengers, The Devil Rides Out and Quatermass into cracking new audio adventures. The Scarifyers is broadcast on BBC Radio 4 Extra, and has been described in the national press as 'rollicking good fun', 'a slice of audio perfection', 'the smartest and most enjoyable thing on British radio' and 'like Tintin but with the lights out.' This is the sixth Scarifyers adventure.

Professor Dunning (Terry Molloy) is finding the business of single-handedly saving Great Britain from the forces of darkness rather taxing.

And Lionheart? Lionheart is missing. When the only clue to his disappearance seems to lie in a twenty-year-old murder investigation, Dunning turns to the one man who might have the answers: Lionheart's erstwhile colleague Harry 'Thumper' Crow (David Warner).

Harry doesn't hold with supernaturalism, but over the next few days he's going to see some very strange things indeed: a string of murdered magicians, a dead music-hall star come back to life, and a pensioner from the depths of hell. Can Crow and Dunning find Lionheart? A terrible truth awaits, as they unearth the long-buried secrets of The Magic Circle.

"A well-produced, beautiful-sounding, totally gripping story... basically, it's really good." ( Starburst Magazine.)
"The only real shame is that the story has to end and we have to wait months to hear the next thrilling adventure." ( Sci-Fi Online)
"There is a touch of magic about The Scarifyers and this outing offers an emotional twist in its tale." ( Nebula One)
"An intriguing and atmospheric adventure... leading to a surprising - and genuinely moving - conclusion." ( SFX Magazine)

What listeners say about The Scarifyers: The Magic Circle

sad to see some cast members go, but a great send of none the less

A poignant tribute to Nicholas Courtney

The acting was fun, and suitable over-the-top

Would you recommend The Scarifyers: The Magic Circle to your friends? Why or why not?

Yes, for a holiday listen - but it was very lightweight

What aspect of the narrators’s performance might you have changed?

Do you think The Scarifyers: The Magic Circle needs a follow-up book? Why or why not?

Possibly, although there is only so much you can get out of this style without getting a bit bored with it.