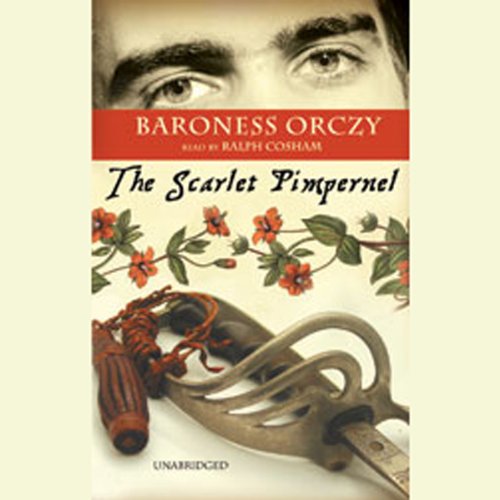 "Who is this man, this Scarlet Pimpernel?" Each day this question grew more pressing to the leaders of the French Revolution. Only this man and his band of followers threatened their total power. Only this maddeningly elusive figure defied the vast network of fanatics, informers, and secret agents that the Revolution spread out to catch its enemies.

Some said this man of many disguises, endless ruses, and infinite daring was an exiled French nobleman, returned to wreak vengeance. Others said he was an English lord, seeking sheer adventure and supreme sport in playing the most dangerous game of all. But of only one thing could those who sought him be sure. They knew all too well the symbol of his presence: the blood-red flower known as the Scarlet Pimpernel.

"A swashbuckling adventure tale of epic proportions...an exciting, fast-paced story." (Large Print Reviews)
"Arguably the best adventure story ever published, and certainly the most influential that appeared during the early decades of the 20th century." (Gary Hoppenstand)

What listeners say about The Scarlet Pimpernel

I was a fan of the book long before listening to the audiobook, and I just have to say, wow! This is one of those books where the nationalities of the main characters is critical to keep in mind, and it's hard to do while just reading - the narration really made it pop. Excellently done!

I really enjoyed this book - had seen the movie but enjoyed hearing all the unabridged details more. Narrator is excellent with french accents - one part at end during chase scene got a little long for me but overall I thoroughly enjoyed it.

This is a book I read over and over again. The Scarlet Pimpernel is the perfect romantic hero, as he serves and sacrifices for the many.

Narrator does a great job, though it's not perfectly smooth. But I love his voices and he adds so much to the story.

Not great literature but a great classic

I almost gave this 5 stars -- I really wanted to because it was hugely entertaining for such a quick, light read, but I found Orczy's prose just a little too purple and repetitious at times. She gives great descriptions, and Sir Blakeny's clever disguises and escapes from the French Republicans are great fun to read (if very obvious to the reader), but while this is a worthy classic in the spy/adventure novel genre, it falls short of being a literary masterpiece; Baroness Orczy just is not a Dickens or even a Bronte.

That said, many people - especially if looking for something light to read - may well enjoy Orczy more than one of Dickens's dense multi-layered tomes, or a depressing Bronte novel about dysfunctional Byronic anti-heroes.

The Scarlet Pimpernel is all close calls and daring rescues by the dashing Sir Percy Blakeny, who adopts the persona of a dull-witted playboy but is secretly the Scarlet Pimpernel, leader of a band of English gentlemen who spirit French aristocrats condemned to die by the guillotine out of France. He's kind of like an 18th century superhero, Bruce Wayne in a cravat. His French-born wife, Marguerite, has no idea that her seemingly stupid and inane husband is the heroic figure admired throughout England and despised throughout France. Much of the tension in the novel is marital tension between these two -- Marguerite has done some bad things in the past that she regrets, but she can't explain them to Percy, so he of course doesn't trust her. Never fear, the story has a romantic happy ending.

Again, great fun to read, but Orczy was a bit of a hack as a writer and the story sort of careens from one unlikely escape to another, so don't expect much depth. It's still better than most modern spy thrillers.

I own the movie but had never read the book. Was looking for some Ralph Cosham books (I love listening to him. This is the 3rd book I've listened to by Mr Cosham, he's wonderful!) on Audible and there was my favorite movie. Was really surprized how much the playwrite took liberties but isn't that always the case. Love FINALLY reading the book!

The author paints vivid scenes that are wonderfully entertaining. The end of the book grew tedious with repetition of several phrases ad nauseum. Still I overall enjoyed the story and recommend it to other listeners.

I first read this book when I was 16 years old, and I have read it many times since then. I mean ~20 times, because it's a short, quick read I just liked the story and all of its elements. It is a story set during the French revolution. The heroine is a young french woman who left France to marry her husband and become the one of the most stylish and wealthy women in London. But it is known to some that she has a dark deed in her past which comes back to haunt her from across the channel. She is blackmailed by an old acquaintance from France for information about the heroic Scarlet Pimpernel, who leads a band of English gentlemen that rescue French aristocrats from the guillotine. She must use her own cunning and determination to try to right her wrongs and prove her loyalty to those she loves.
I love reading this book but it's great to hear it aloud also. it's one of my favorites, and has been for several years.

Society knows him as a wealthy and utterly unintersting man of leisure. Little do they know about how double life, where he uses his financial resources, his exceptional physical condition, and cunning mind to save the innocent from those that would do them harm. His unique symbol ensures that everyone knows to credit the mysterious vigilante for his heroics.

The Scarlet Pimpernel is often credited as being the start of the "hero with a secret identity" trope, a banner later carried by Zorro, and then, yes, Batman and many other superheroes.

This is the story of an English nobleman who strives to save French noble families from the guillotine in the French Revolution, outwitting the enemy at every turn.

I try occasionally to delve into works of classic literature. Often I find them utterly boring compared to modern works. I won't say that every second of the Scarlet Pimpernel is utterly gripping, but it holds up well for a story well over a century old. It's a fun excursion for anyone who likes superheroes.

I'll also note that the story is told from a woman's perspective--a character regarded as not just quite lovely, but the keenest mind in France. Although generally just an observer, not making change happen herself, she is nonetheless brave, adventurous and not afraid to get her hands dirty or put herself in harm's way for what she believes in. Not something we always see in books this old.

They could have found a better narrator though.

This is such a fun and quick listen. The narrator is one of the best I've heard. This story sounds very modern. The pace and the characters had me laughing out loud. Some people have found the repeated descriptions too flowery or over the top, but I loved the use of epithets and repeated descriptive markers - a classical touch (again, offering evidence that there is likely more going on here than first meets the ear). Adventure story, satire, love story, class warfare - oh my!

Get the Cliff's Notes instead

This is one of those books you hear about, but that I hadn't read, so I decided to pick up the audio version. I should have just looked up the plot on Wikipedia.

Percy is too foppish, Marguerite is too girlish, and their love story is absurd. I wanted more of the heroic Pimpernel and his dashing adventures. While we catch glimpses of the adventures, we are only allowed behind the scenes on one of them.

I think my frustrations were exacerbated by the narrator. There was nothing that I can really pinpoint that he did wrong, so maybe the problem was the choice of a male voice for this role. The book was written by a woman and, despite the title, is really the story of Marguerite. Perhaps a female voice would have made the melodrama more palatable.

I like some melodramatic classics (The Count of Monte Cristo, for one), but this one was too much for me.

Great fun. Simple, fast-paced adventure with all the vital ingredients - a hero, a heroine, lots of chums, a baddie, rolicking romance and a happy ending. Absolutely harmless fun ...unless you are French.

Prepostorous and old-fashioned, but a really fun listen anyway.