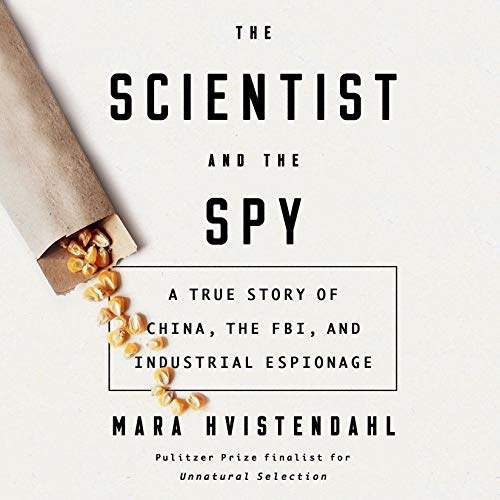 A riveting true story of industrial espionage in which a Chinese-born scientist is pursued by the US government for trying to steal trade secrets, by a finalist for the Pulitzer Prize in nonfiction.

In September 2011, sheriff’s deputies in Iowa encountered three ethnic Chinese men near a field where a farmer was growing corn seed under contract with Monsanto. What began as a simple trespassing inquiry mushroomed into a two-year FBI operation in which investigators bugged the men’s rental cars, used a warrant intended for foreign terrorists and spies, and flew surveillance planes over corn country - all in the name of protecting trade secrets of corporate giants Monsanto and DuPont Pioneer. In The Scientist and the Spy, Hvistendahl gives a gripping account of this unusually far-reaching investigation, which pitted a veteran FBI special agent against Florida resident Robert Mo, who after his academic career foundered took a questionable job with the Chinese agricultural company DBN - and became a pawn in a global rivalry.

Industrial espionage by Chinese companies lies beneath the United States’ recent trade war with China, and it is one of the top counterintelligence targets of the FBI. But a decade of efforts to stem the problem have been largely ineffective. Through previously unreleased FBI files and her reporting from across the United States and China, Hvistendahl describes a long history of shoddy counterintelligence on China, much of it tinged with racism, and questions the role that corporate influence plays in trade secrets theft cases brought by the US government. The Scientist and the Spy is both an important exploration of the issues at stake and a compelling, involving listen.

“[A] fascinating and well-researched study. . . . Those looking for insights into the current tensions with China will be rewarded.” (Publishers Weekly, starred review)

"The Scientist and the Spy is as compulsively readable as espionage thriller and as darkly troubling as any morality tale. Told with empathy, insight, and remarkable detail, the author shines a clear light on the increasingly relentless federal investigation, its Chinese targets, and the powerful government and business interests that drive the story to its fascinating conclusion." (Deborah Blum, author of The Poison Squad: One Chemist's Single-Minded Quest for Food Safety at the Turn of the Twentieth Century)

"You will learn more about China from this thrilling, real-life drama than you will from a whole stack of China-related books by lesser talents. Mara Hvistendahl has given us an utterly original, provocative, and revealing tale of the relationship between China and the United States - and what a tale it is. Intrepid, humane, and always tough-minded, she writes with the lucid precision of a science writer and the flair of a seasoned spy novelist." (Evan Osnos, author of Age of Ambition: Chasing Fortune, Truth, and Faith in the New China)

What listeners say about The Scientist and the Spy

There are two parts to this story. One is based in fact and an accurate portrayal of events. The other, read by the author, is composed of biased opinions and out of context quotes from weak sources and interviews. If your looking for fact based, informative reporting of a well documented event this book gets a 50% or F. If your looking for frothy opinions with extreme pro Chinese bias bordering on propaganda, this book gets 100% or A+.

I enjoyed this book very much. I heard Mara Hvistendahl do an interview on NPR months ago and waited anxiously for this book to come out. The whole premise was very interesting and, overall, it was a great listen. My only complaint is Ms Hvistendahl’s narrated sections. She did great as a whole, but there were a lot of strange pauses in the middle of sentences that, by the end, got to be a big difficult to listen to. I still highly recommend the book, it is a great listen.

Should have been a magazine article

Way too many opinions and unsupported opinions. When several chapters are written in the first person narrative you can almost be assured you have come across an author that does not have a firm grasp of the facts. A very weak effort.

This is a fascinating dive into stories that lie behind the headlines of industrial espionage, China and rural farms in Iowa. From the seed dealer to the charming but flawed scientist Robert Mo there are no knights in shining armor just as there are no thoroughly reprehensible bad guys. Instead we hear stories of people finding themselves accused based on little more than their ethnicity and see real criminals making stupendously ill-advised decisions that change the course of their lives. Those who enjoyed documentaries like the recent "American Factory" that explore the similarities and differences between American and Chinese mindsets will find themselves rewarded by this well-researched character study.

An absolutely addictive book, with a so-strange-it-can-only-be-true, I can’t recommend this enough. In this, the audible version there are just a couple of glaring — yet minor — pronunciation mistakes in some of Mara’s parts as to location names in the US, but otherwise a perfect listen.

Interesting but not great.

Struggled to find the protagonist...perhaps that was the point? Robert and the Goverment play both the victim and the criminal and as always the overarching theme of US racism is creeping behind the corner. It's a fitting book for 2020.

Nice story but not as interesting as I had hoped

Really well researched and I liked Mara’s insertion into the story every so often with a macro perspective. However, I just didn’t find the story that interesting or exciting, and I found the second half of the book slow. But, the author did as much as possible to make this a compelling read, all the way to the end.

I love this book! It has a bit of everything from farming to international espionage. It's interesting from start to finish and well-researched.

The book articulates well how trade theft is done, says it could cause hundreds of billions of dollars of lost dollars to the US, and then does an about face and says the $1-2b lost from the current trade war is more serious.

Quite unfortunate misunderstanding if the facts the book lays out. Also, it is incredibly partisan at the end, I'm not sure what happened to the authors.

China is alleged to have begun a widespread effort to acquire military technologies and classified information and the trade secrets of foreign companies.

The Chinese government is also accused of stealing trade secrets and technologies, often from companies in the West, to help support Chinese long-term military and commercial development.

China has been accused of using a number of methods to obtain technologies, including espionage, exploitation of commercial entities and a network of scientific, academic and business contacts.

Although China uses a network of contacts to collect information used to benefit Chinese businesses, each bit of information does not invite scrutiny or prosecution by other foreign governments.

My salute to those who risk their lives and their families on enemies' soil, fighting for the best interests of his Fatherland China | 🇨🇳

This book caught my imagination when purchased, yet when reading the thoroughness of seed plantation did not need to be more or less spoken for 6 hours before the book broke into life. I understand people need a basic knowledge and understanding of the subject to hand, but it felt as though it was a degree I was study for, yet not knowing what examination questions would be at the end so read and learnt anything and everything for a few “meaningful matters”. Last two hours very gripping intense and insightful in what racism still is in our world. The first 6 hours very disappointing with minimal information needed for the conclusion.

An interesting trip in two world i knew little of

A really interesting performance with the story and analysis were split between two narrators.

I heard the authors interview on the podcast “Longform” and was immediately interested in the subject of industrial espionage. There are two narrators to this book - James Laurie who is quite good and secondly the author herself. The author is not a good narrator. She can’t maintain the even and consistent voice required to narrate professionally. Fortunately Laurie narrates the bulk of the novel. When the author narrates she has this appalling tendency to end every sentence with an upward inflexion. Just because you wrote the book doesn’t mean you should narrate it. Listening to the author narrate is akin to being forced to listen to a flock of adolescent girls talk. Needless to say I skipped the chapters she narrates after a while.

As to content, the book starts strongly on the topic of industrial espionage and was quite to my liking. But after some time, the subject strays to prosecutorial over reach of the FBI and the US Federal Government. The book becomes somewhat dull at this point and frankly, laborious. As the book progresses, an anti-USA sentiment rears its head and there is even a bit of Trump bashing in there which really diminishes the book.

Invariably, the author almost takes the side of the primary offender and sympathises with him. At the end of the day, he committed a crime and was convicted. The author cannot help but import systemic racism as a topic.

The book touches upon some interesting topics such as the ethical dilemma created by the FBI prosecuting intellectual property theft crimes on behalf of Monsanto and Pioneer given that much is made of Chinese government support for Chinese companies. This is a really interesting theme that goes unexplored.

Ultimately the book fails to thoroughly cover industrial espionage. It is at times poorly narrated and is a missed opportunity on the part of the writer.