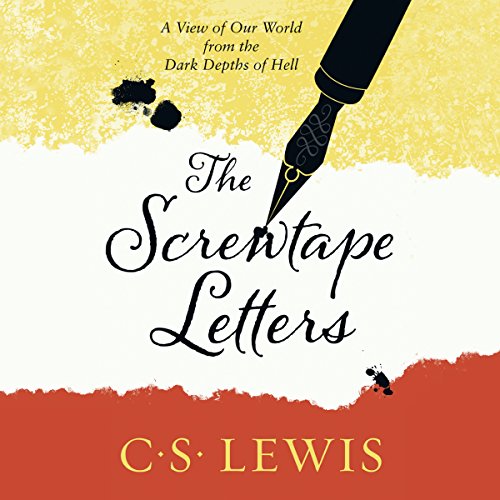 On its first appearance, The Screwtape Letters was immediately recognized as a milestone in the history of popular theology. Now, in its 70th anniversary year, and having sold over half a million copies, it is an iconic classic on spiritual warfare and the power of the devil.

This profound and striking narrative takes the form of a series of letters from Screwtape, a devil high in the Infernal Civil Service, to his nephew Wormwood, a junior colleague engaged in his first mission on Earth trying to secure the damnation of a young man who has just become a Christian. Although the young man initially looks to be a willing victim, he changes his ways and is ‘lost’ to the young devil.

Dedicated to Lewis’ friend and colleague J.R.R. Tolkien, The Screwtape Letters is a timeless classic on spiritual warfare and the invisible realities which are part of our religious experience.

"The book is sparkling yet truly reverent, in fact a perfect joy, and should become a classic." ( The Guardian)

What listeners say about The Screwtape Letters

Would you consider the audio edition of The Screwtape Letters to be better than the print version?

This scintillating and idiosyncratic work of literary genius is abundantly more prolific when articulated with lexical dexterity, as is the case with this audiobook. However I make the subjective distinction that it is the best available to purchase, in contrast with the affluently more cultivated version preformed by John Cleese. If one can obtain the adaptation by Mr. Cleese I highly eulogize it.

What was one of the most memorable moments of The Screwtape Letters?

The letters in their entirety are brilliant at dramatizing, interpreted in Lewis' unique and rationalized way, the conflict of emotions and feelings, thoughts and convictions faced by Christians at all stages of our walk of faith.

When screwtape metamorphosizes into a centipede, a totally unpredicted and amusing twist.

Absolutely. One can lose oneself in the linguistic brilliance and deep analytical thought to find the four hours the audiobook encompass have drifted by swiftly and with the residuum of satisfaction.

Praise be to God!

Those pesky spirits and their ways

Would you listen to The Screwtape Letters again? Why?

Yes. You will shake your head as you recognise yourself and others. Also how many times you've fallen for similar tricks.

The poor "patient" who never speaks but is the everyman in this book. He has a tough time but he makes it in the end.

He has the devilish air and supercilious curl of Screwtape just right.

Nope, it's better taken a bit at a time. I believe it was originally written in parts for a weekly magazine. It's strong stuff for savouring over time.

CS Lewis could write so honestly about the human heart because he knew himself and we are the beneficiaries of that knowledge. It's also very funny.

Opening you mind to the idea that the devil knows just how to get to you and that it isn't with complicated things but simple attacks, listening to this helps you see areas you can protect yourself.

CS Lewis really had a gift for dialogue, it's easy to listen to and wonderfully written :)

Amazing insight into the way the enemy operates

This book is quite heavy going, but thankfully divided into' letters' which are perfect sized! C S Lewis writes with such insight about how the devils might communicate and try to decieve, lure and coerce their 'patients' (humans!) into non-belief in God. It opens the reader's eye to the schemes the emeny has to trick us and to keep us from faith and all that is true in God's promises. The devils know how powerful God is and try to use all of their efforts to prevent humans from growing closer to God, using the person's own doubt and thoughts to their advantage. A beautifully written book which really makes you think about the dangers of the devil's coersion... but allows us to realise that the devil has NO power over us. God will conquer, God is true. We just have to have faith!

Beautifully performed reading of a classic

There are many religious books which aim to challenge our thinking about how we live. What makes The Screwtape Letters a classic and still fresh and original more than 70 years is using story (and really good story at that) to bring that challenge. As Screwtape (the senior devil) writes to his struggling nephew Wormwood the failings in human nature that they seek to take advantage of and the way this view from the other side of the mirror asks us to look deeper at ourselves was brilliant when CS Lewis wrote it and has lost nothing with the passage of time.

Joss Ackland's reading is avuncular enough to draw you in and entertain and magisterial enough to fit Screwtape's character.

Wonderfully narrated production of CS Lewis's classic. Great at so many levels: a great little series of letters, a useful observation on how we're all capable of behaving, and a challenging insight on how we can be tempted. Great to hear this in audio some 30 years after having read this in print.

I read this book many years ago and found it to be an interesting outlook from the opposite side of the spiritual fence. I found it to be humorous, insightful and thought provoking. For the Christian struggle isn't against flesh and blood,

An excellent and timely read. C. S. Lewis was a master writer and this book is timeless. He embodies and describes so accurately the times preceding the current days and age. Our generation and the youth of the day should all listen to this and learn from history. There is nothing new under the sun. When we face our Maker one on one, then we will truly know the times we are living in just as Lewis elegantly puts it in the book.
This is a fantastic read and Joss Auckland does a great job in adding depth to the story through his husky narration.

CS Lewis is a master story-teller and author. He delves deeper into our everyday lives from the view point of Screwtape and really makes one think about the way we live our lives.

Definitely one I’ll reread over and over as the lessons learnt are sure to present themselves at different stages of my life.

Though I may not completely agree with his theology, this is very well written and is actually not very different from the current culture.

I just love the way he uses words. He is fantastic!!

I think I'd need to listen a second time to understand it fully on a more profound but it was entertaining to listen to. It made me think about things in my own life and how the things Screwtape was saying were manipulation could apply to me. I would recommend it, however it's quite a dark book with no real respite. C.S Lewis says so himself in the end how you can feel smothered when reading the book. But definitely give it a go. Its short enough.

I really struggle to read, I rarely finish books. I've listened to this twice and was hanging off of every word both times. I enjoyed the narration too.

Reading it alongside the physical copy, I was captivated by Ackland's expressions and dramatising the characters. I was able to finish this book within 3 evenings, as it was difficult to put down!

Joss Ackland is perfect as Screwtape

It would have been so easy for the narrator to fall into a creepy, or melodramatic persona. Joss Ackland makes Screwtape believable, disturbing and menacing. His characterisation added even more depth and complexity to this already penetrating book. Highly recommended.

The best book ever written.

A story of heaven and hell: well, mostly hell.
The one who listens to this and considers it, is blessed.

Brilliant writing on the part of C S Lewis and was well performed. I thoroughly enjoyed it.

They chose the perfect voice and tone for the book to liven up the character. The story itself is really well done, easy to. Relate to because we live it.

A sublime experience of wit and humour

Having read this classic some years ago, I mistakenly thought I knew what to expect. Was I ever wrong! I am completely blown away.

The combination of CS Lewis’ literary genius and the incredible artistry of Joss Ackland’s narration make for one of the most delightful audiobook experiences I have ever had. I am so glad I can listen to it again and again.

Truly wonderful. Do yourself a favour and don’t miss it.

Amazing performance of an amazing text by a truely great writer and human being. Highly recommended

Oh, how this work of fiction parallels the current world environment!

What a brilliant book and so well narrated. The current world perfectly paralleled in the way good is now evil and evil now good. A must listen for everyone.