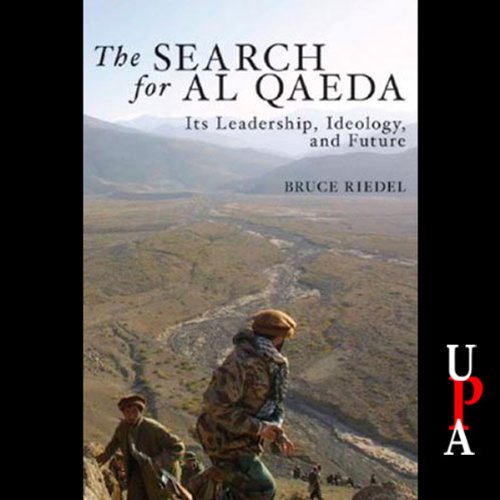 The Search for Al Qaeda

Al Qaeda is the most dangerous terrorist movement in history. Yet most people in the Americas and Europe know very little about it, or their view is clouded by misperceptions and half truths. If the first rule of war is to "know your enemy", then we have a long way to go. This important book fills this gap with a comprehensive analysis of al Qaeda - the origins, leadership, ideology, and strategy of the terrorist network that brought down the Twin Towers and continues to threaten us today.

Bruce Riedel is an expert on the Middle East and South Asia, with 30 years of intelligence and policymaking experience. He was actually in the White House Situation Room during the 9/11 attacks, serving as special assistant to the president and National Security Council senior director for Near East Affairs. He draws on this insider experience in profiling the four most important figures in the al Qaeda movement: Osama bin Laden, its creator and charismatic leader; ideologue Ayman Zawahiri, its Egyptian coleader and principal spokesman; Abu Musaib al Zarqawi, leader of al Qaeda in Iraq until his death in 2006; and Mullah Omar, its Taliban host. These profiles provide the base from which Riedel delivers a much clearer understanding of al Qaeda and what must be done to counter it.

The Search for al Qaeda reviews how al Qaeda was created and developed, presenting authoritative and chilling background on "The Manhattan Raid", but Riedel focuses more closely on what has happened to it since that awful day. He outlines al Qaeda's ultimate goals, which are to drive America out of the Muslim world, to destroy Israel, and to create a jihadist caliphate larger than the Ottoman Empire at its height. The book concludes with a strategy for dealing with - and defeating - this most dangerous menace. The book is published by Brookings Institution Press.

"Riedel may not have all the answers, but his book is a critical primer for those who will have to find them." ( The Guardian)
"Riedel's argument in favor of greater U.S. involvement in the Arab-Israeli peace process is persuasive, and his prescriptions are well-evidenced, unfailingly sound and refreshingly sensible." ( Publishers Weekly)

Started well and then turned into meals-on-wheels

It started out with some insightful background on the topic and interesting insider analysis, but somewhere it turned into standard meals on wheels foreign policy thesis. "We have to bribe the world to love us." I should say I am not a Republican or a hard right anything, and while I am all for foreign aid, I just don't believe that all our problems can be resolved by bribing Afghanistan and Iraq off with schools, hospitals, and LED TV's...

In the end of the day wasn't the left wing making fun of W for "spreading democracy?" We have interests around the world, whether they are security or civil rights we can only truly intervene in the long term, if we have real partners locally someone who's interests align with ours as much as theirs and not just someone who can speak English (Karzai). Otherwise it's all stick and no carrot, not because we are evil western imperialists, but because our leaders have responsibility for our security first. Otherwise, it's the "Mouse who roared."