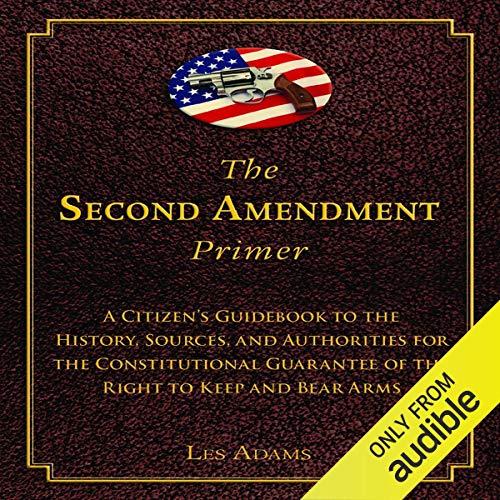 Americans cherish their right to bear arms, and The Second Amendment Primer, by Virginia Republican Les Adams, explains the history behind this important legal right. Narrator Kevin Henderson calmly and authoritatively presents a selection of historical documents and speeches alongside interpretive commentary that greatly aids listeners in understanding the basis of today's gun laws. Henderson also convincingly advocates Adams' perspective against the "collectivist" interpretation of the Second Amendment, providing substantial ammunition for listeners looking for evidence supporting their right to own a gun for the protection of home and family.

A simple guide to understanding your Second Amendment freedoms.

So much of the debate about the Second Amendment is in scholarly journals and academic papers written by scholars and judges, or directed towards other scholars, law professors, attorneys, and judges. Trying to wade through the extensive footnotes and references to legal cases and historical precedents known only to the academic elite is more than enough to make anyone feel hopeless.

With The Second Amendment Primer, Les Adams finally provides an accessible discussion of the Second Amendment. It is a “primer” because it is elementary. Chronologically arranged, it traces the development of the right to keep and bear arms from its birth in ancient Greece to its addition in the U.S. Constitution. Supplemental essays discuss the Second Amendment’s interpretation in today’s world from the viewpoints of both firearms enthusiasts as well as those who would limit the amendment’s purview.

Although The Second Amendment Primer is aimed at the average reader, Adams’s facts are detailed and well-documented. Reference margin notes, an extensive bibliography, and a comprehensive subject index showcase the author’s research and show more curious readers how to continue on their path to understanding exactly what the Second Amendment is saying. Using this “citizen’s guide” as a stepping stone, anyone can become a successful scholar of the right to bear arms.

What listeners say about The Second Amendment Primer

this just became my go to.

I was impressed with how the author described his approach to the material and how he arranged it. Very valuable.

shittay!!! full of one side facts. I have read

many facts concerning gun control and violence. this book reads like a bloomberg creation. or Obama or Clinton. Not enough good men left TTL fight. we will lose soon.

Well worth it to understand the true historical background including referenced information. I now know with better accuracy how and why the second amendment came to be in the bill of rights

Fact driven, more people should know this, applies to more then just the second amendment.

Great lesson on what the Founders meant

Well presented, pleasantly narrated audiobook. Les Adams gives the context of our Second Amendment and history going back thousands of years which support it. Well done!

You will learn the roots and history of our Second Amendment Rights, as you've probably never heard before!

information every Citizen needs and should have!

I loved the historical reference to the rights to bear arms and the reason behind the thinking the founding fathers had for making the second amendment to the Constitution, further more the more current standing of the amendment in current times

Thank you for this Primer it was very informative. The research on gun rights in America and common law practice is very interesting. The specific words chosen should mean a lot in today's American society especially when we go by the letter of the law.

The nra being tied to this made it hard to listen to. As a gun owner the nra is a threat to my rights.
As soon as it got past that part the information was fantastic and put together nicely.