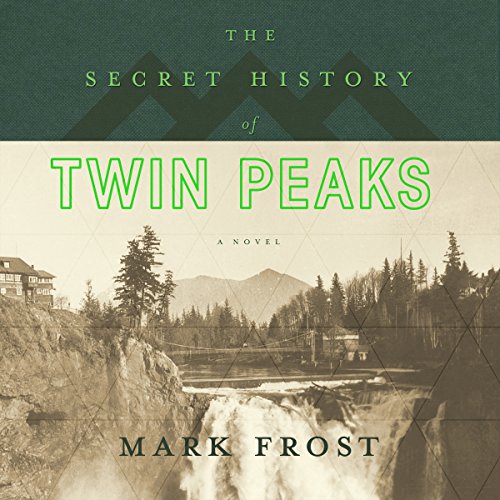 Twin Peaks is many things. The haunting cult show about a murdered homecoming queen has influenced television since its debut over the past 25 years. This audiobook by Twin Peaks co-creator Mark Frost deepens the mythology of the town and its people with original materials, and is sprinkled with subtle hints about the future revival airing on Showtime in 2017.

The Secret History of Twin Peaks enlarges the world of the original series, placing the unexplained phenomena that unfolded there into a vastly layered, wide-ranging history, beginning with the journals of Lewis and Clark and ending with the shocking events that closed the finale.

The perfect way to get in the mood for the upcoming Showtime series.

What listeners say about The Secret History of Twin Peaks

Damn Fine Audio book, Bring on the Final Dossier! I can't fucking wait for it!

Absolutely a wonderful read for a Twin Peaks fan.

Definitely for the Twin Peaks fan. If you're watching the revival series, this is a MUST read. You'll not be disappointed.

What would have made The Secret History of Twin Peaks better?

Which such a great cast, you'd expect a better quality. at 64kpbs/22.050kHz, this make the audiobook sounding out from a poor radio broadcast

This Audio Book is not what it appears

In the words of Dale Cooper: I'm going to let you in on a little secret. Every day, once a day, give yourself a present. Don't plan it. Don't wait for it. Just let it happen. It could be a new shirt at the men's store, a catnap in your office chair, two cups of good, hot black coffee, or a delightful audio book that will further enrich the world of Twin Peaks for you.

25 years after the show ended, I had some certain expectations of what this book might be. I was way off. What's here is so unexpected, it took me several tries to approach it and settle into the story that it wanted to tell, not the story I wanted to hear. Once it clicked – I was all in. Mark Frost's deft interweaving of apocryphal American history, of a surprisingly broad scope, is used to deepen and enlarge the uncanny cosmology of Twin Peaks. Now that the new series is underway, overlooked clues buried in this book are beginning to surface.

Well worth your time if you enjoy a mystery that won't give itself up without a fight.

Well ! What a story following a far longer timeline than I anticipated. The historical back story was interesting and relevant and as we grew closer to the time of the series I got more and more excited. I am literally desperate for season 3 now so hurry up 2017!

Its great to be back in Twin Peaks.

I was genuinely depressed when this book ended. For 9hrs and 33 minutes I was back in Twin Peaks. It was honestly my favourite audio book experience so far. The writing, the atmosphere and the performances were all pitch perfect. I loved it and if you're a fan of Twin Peaks I'm pretty sure you will to.

The Owls are not what they seem

brepuS. ti devoL seY
Another fantastic addition to The Twin Peaks world. Back story for the fans an absolute must. Wonderfully read by the actors and superbly written. 10/10

This is a top notch addition/essential for any Twin Peaks obsessive. In order to properly understand what is happening in season 3, this book offers important and relevant detail. Watch out for the 'mother of prostitues'!!!!!

I've been anticipating this book with great excitement but I feel like I've just been "Rick Rolled". I was expecting something written in the same vain as Cooper's autobiography and Laura's diary that bridged the gap between the original and the new series, but what I got was tedious, unrelated waffle hastily tied together at the end to justify using the Twin Peaks brand...and make an easy buck. There is little relevance to the series and the back stories of a few characters was already covered in the series. Just as the book finally begins to get interesting and teases some interesting insights it ends.

That gum you like is going to come back in style

Essential listening for any Twin Peaks fan. a great fleshing out of the show's mythology (who'd have guessed that the randy old newspaper publisher from season 2 was so pivotal!)

Superb narration of the book by the cast of actors

A complex history for both fans and newcomers

Who killed Laura Palmer? That was the question on everyone’s lips in the early 1990s when the face of television storytelling changed. Eccentric film-maker David Lynch joined forces with Mark Frost to create a quirky murder mysteries series like nothing seen before. To this day, modern storytelling tries to emulate its eccentricities, wit and beauty.

Centring around the FBI investigation into the murder of high school beauty Laura Palmer, the series dove deep into the heart of the seemingly quiet Washington state town of Twin Peaks, where closed doors hid secrets that ranged from drug running to the supernatural. Peppered with oddball characters and dark secrets, the lives of the town’s residents peeled back to reveal that nothing and no one was as it seemed.

the-secret-history-of-twin-peaks-200In the final episode, the ghost of Laura Palmer promised to “see you again in 25 years” and, while that deadline has passed, the series is being revived in 2017 to peak back into the town and all its mysteries. In the lead up to the highly anticipated new series, Mark Frost takes us back to the very beginning of the town in his new book, The Secret History of Twin Peaks, beginning with the early explorers and taking the reader through to the shocking events that closed the original series.

Their readings add extra life to this fan-focused fiction that moves from the town’s establishment to native and UFO mythology and, ultimately, the unknown history of many of the original television characters. We find out how Margaret (the “Log Lady”) came to be the way she is; we learn the mystery behind Nadine’s breakdown; and the surprising criminal history of Josie Packard amongst other histories.

Running just under 10 hours, The Secret History of Twin Peaks is an exciting new glimpse into the mystery town and its inhabitants. Newcomers to the world of Twin Peaks may find the deeper history focusses a little too much on UFO mythology but will undoubtedly love the fascinating introductions to the characters, many who they will meet in 2017 when they revive their roles for the new series.

It’s easy to dismiss a book tie-in as nothing more than a piece of fan fiction but, as with the television show itself, Mark Frost has imagined a world rich in imagination and presents it as historical fact. The excellent and large cast in the audiobook makes one wonder why anyone would bother reading the book instead of immersing themselves in so many voices from the past that no doubt still haunt their memories.

Read my full review and other audiobook reviews under the Entertainment section of glamadelaide dot com dot au.

depth and understanding to the twin peaks mystery

worth the investment. high quality writing and production - must read for any twin peaks fans (even the skeptical)

yassss must read for any twin peaks fanatic. Although slightly distorted leads to full immersion.

pure brilliance in exceptional Twin Peaks fashion. although unlike the television series, i feel more than satisfied with the answers to the mystery we were never given all those years ago. and superbly performed/narrated.

Simply astounding. Worth every second, although it will leave you with even more questions x

great insight if you're a true twin peaks fan

Greek Easter eggs and will help sort out some of the bones for the lehmanns viewers of twin peak some that just couldn't wrap their heads around things and how they would be or should not be in this strange world .

I only listened to chapter six. Found it rather boring. wish l could swap it.

The book was filled with interesting concepts, and stories however it didnt seem to flow and had no conclusion. Quite confusing with the constant change of characters.