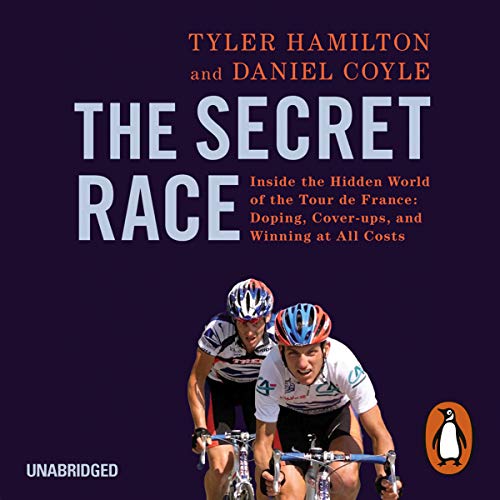 Inside the Hidden World of the Tour de France: Doping, Cover-ups, and Winning at All Costs
Written by: Tyler Hamilton, Daniel Coyle
Narrated by: Sean Runnette
Length: 11 hrs and 19 mins
Categories: Sports & Outdoors
5 out of 5 stars 5.0 (1 rating)

Winner of the William Hill Sports Book of the Year Award 2012.

On a fateful night in 2009, Tyler Hamilton and Daniel Coyle met for dinner at a restaurant in Boulder, Colorado. The two had met five years before while Coyle was writing his best-selling book Lance Armstrong: Tour de Force. But this time, Tyler had something else on his mind. He finally wanted to come clean, about everything: the doping, the lying, his years as Lance Armstrong's teammate on U.S. Postal,, and his decade spent running from the truth. "I'm sorry," he told Coyle. "It just feels so good to be able to talk about this. I've been quiet for so many years."

Over the next 18 months, Hamilton would tell his story - and his sport's story - in explosive detail, never sparing himself in the process. In a way, he became as obsessed with telling the truth as he had been with winning the Tour de France just a few years before.

The result of this determination is The Secret Race, a book that pulls back the curtain and takes us into the secret world of professional cycling like never before. It's a world populated by unbelievably driven - and some flawed - characters. A world where the competition used every means to get an edge, and the options were stark. A world where it often felt like there was no choice.

This book answers a lot of the questions a non-athlete would ask about why someone would dope. It comes across as being an honest account by someone who readily admits their own failings as a person. A very interesting insight into the world of professional bike racing and doping generally.

The whole story of how they did it, frightening!

If you could sum up The Secret Race in three words, what would they be?

Getting to know Lance Armstrong and some of his teammates from an inside perspective. What it's like to live, train and compete in the top echelon of professional cheaters... I mean cyclists...

What does Sean Runnette bring to the story that you wouldn’t experience if you just read the book?

Sean really brings the dynamic of living the story. He tells it as though it is live and happening all around us right now... This could also be because I listen to it while cycling in the mornings!

I didn't cry but I definitely laughed out loud several times while listening. Some of the stories were genuinely funny but mostly just quite shocking to learn some of the secret techniques these guys use to maintain their competitive advantages in the sport.

Is it moral to read Hamilton's Book?

What did you love best about The Secret Race?

Complete and shocking truth about widespread drug usage from the early 90s. Many famous riders are named in this book. But a moral dilemna given Nicole Cooke's recent retirement speech as follows: "Tyler Hamilton will make more money from his book describing how he cheated than Bessette or I will make in all our years of our honest labour. The situation requires the very basics of morality. Please don't reward people like Hamilton with money. That is the last thing he needs. Donate his literary prize and subsequent earnings from such publications to a charity. There are many places infinitely more deserving than the filthy hands of Hamilton."

What other book might you compare The Secret Race to and why?

'Its Not About the Bike' - It's about Lance, as much as about Hamilton himself. Maybe a bit too much Lance in this book, but interesting nevertheless and topical.

Which character – as performed by Sean Runnette – was your favorite?

Jens Voigt - "I'm looking at the wheel in front of me".

'Vampires in the Peleton'

Where does The Secret Race rank among all the audiobooks you’ve listened to so far?

What other book might you compare The Secret Race to and why?

I had just read the Bush at War series before this and in some ways it lifts the veil on a world we only glimpse into much the same way.

The discussion of how Tyler first came to dope

The persistence of USADA to go after Armstrong was impressive

As a casual cycling fan I found this fascinating, Hamilton does not leave any thing out and should be commended for his candor. A really interesting read for any sports fan.

Great story even if you are not a bike racing fan

This book tells it like it was about the doping culture in top class bike racing and how it was impossible to win without enhancing your performance. A fascinating insight into the top races and racers, making clear that those superhuman feats you had seen in the Tour de France on TV really were that - beyond normal human achievement. Tyler Hamilton comes across as a basically decent guy, and there is relatively little special pleading. The commentary by his co-author Daniel Coyle adds welcome balance. Just be glad that the Tour is so much slower than it was. Sean Runnette reads really well.

I'd just finished listening to Bradley Wiggin's autobiography and moved straight onto this one. Talk about a complete contrast of the same competition and hopefully shows how much progress the sport has made over the last few years. Sean Runnette narrated it perfectly and painted a brilliant picture of 'The Secret Race'. If you're interested in bike racing then this is an absolute must listen to, especially after the recent Lance Armstrong Oprah Winfrey confession. You'll be hooked and in disbelief of the cover up over the last 15 years.

I have been a lover of the Tour De France since ITV's World of Sport showed it in the 70's. And since the 80's/90's have followed it religiously on C4 and then Eurosport. I remember the Festina affair well and how the cyclists refused to race the following day. I don't think I ever imagined cycling was so dirty, well not until this book. Daniel Coyle and Sean Runnette have turned this autobiography of a cycling cheat into a masterpiece. Don't get me wrong I think Tyler cheated for all the right reasons. He wanted to win and not get left behind and he wanted to beat his once friend and nemisis Lance Armstrong. The book is endearing and engaging and you almost don't want Tyler Hamilton to get caught, but you know how it ends. I'm really pleased his story has been made into a book. I think a film must be on the cards. This book is worth 5 stars any day of the week, certainly the best Autobiography I've read/heard in a very, very, long time

The Truth Will Out!

Tyler Hamilton, pro-cyclist, Lance Armstrong team mate, Olympic Gold Medalist, Doper, Cheat, Human being. The book tells the story of Tyler Hamilton, how he became a professional cyclist, how he was one of Lance Armstrong's closest team mates, how he was doping on an almost industrial scale (but not quite as much as Lance, EPO, blood transfusions, Human Growth Hormone, Testostorone etc). I bought this book partly to get insight into Lance Armstrong (LA). Before buying the book I suspected that LA was a doper. By the end of the very detailed, but entertaining, book, I came to understand how LA had obviously had kept one step ahead of the other (many) dopers and in essence how his 7 TdF titles was as much down to his willingness to go that extra mile in cheating and in keeping the competition from getting access to the latest drugs and cheating techniques. It also reveals how LA is quite a bully, a ruthless one at that. But the book is not written as a character assassination of LA. It's the story of how a human being, made mistakes and how he has been affected by those mistakes. The moral of the book is: If you are going to live a lie, don't expect to sleep easy at night (unless you are one of those rare people who lacks a conscience). The author of the book also gives insight by speaking to and about other characters involved in pro-cycling and by the depth of research he has done which underlines the credibility of the story. Overall a very well researched and written story.

A Great book letting you see the inside world of a professional cyclist, what you have to do if you want to keep up and win.

Mix of science, elite sports, personalities, a personal journey and the world of cycle racing during the height of doping. Well written and incredibly interesting. A brave book by Tyler Hamilton.

Not worth more time

An enjoyable and informative read that’s made me want to keep going and listen to more. It’s well narrated and I would highly recommend. It has a pretty heavy emphasis on the events of Lance Armstrong.

If you love and hate cycling ..this is for you

Lots of detail and the truth behind the postal team and Armstrong’s bullying .
Hamilton’s story isn’t a feel good listen .
He tells all and leaves no stone unturned when describing the EPO scandals of the 90s and beyond .
Great choice 👍

What these guys put themselves through to win is just unbelievable. Really interesting book.
Chapaux

great insight into another world

THE definitive book on pro cycling and doping.

This is the kind of audiobook you can listen to multiple times. Clear, honest, revealing, interesting. This is THE definitive book on Le Tour De France, professional road cycling, doping, Lance Armstrong and Tyler Hamilton. Would definitely recommend to anyone even mildly interested in any of those topics, and yet it's also a compelling read on its own - regardless of prior interest. Well written and well read.

Reading this in 2020, post all the confessions from Lance, has not dulled the story at all. If anything, it has added to it. It's a well written, factual, not overly self indulgent tale. I would highly recommend it

Quite an eye opener

I really enjoyed this book. Learnt quite a lot of the background to Armstrong's power in the racing world.

Well written perspective on cycling, doping and life with lance. I feel for all cyclists

One of the best audio books I have listened to so far. Great narration, and good insight into the cycling world. Everyone knows they were and are doping, but hearing it from the inside gives a different perspective.

A great insight into what went on in the peloton during the bad days of pro-cycling.

Absolutely great Book. Tyler and the Author make this a great easy read, straight to the point of what the book is about. They both explain in detail how the drugs work in detail and the methods used to make this book great and easy to understand. Very Big Fan of Tyler 👍👍

Amazing story. Tyler makes you question what you'd do in his situation and highlights the terrible culture in cycling during this era.