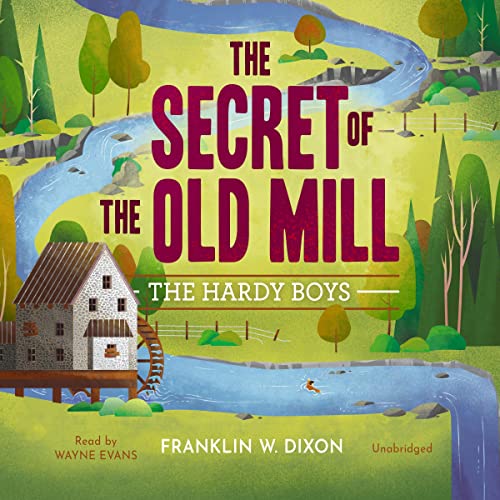 The Secret of the Old Mill

This is the original 1927 story of The Secret of the Old Mill: The Hardy Boys, Book 3. As such, it is different than later versions of this book with the same title. Frank and Joe Hardy, brothers who are high school students, help a stranger at the train station to exchange a five-dollar bill—only to find out later that it was counterfeit. Bayport seems to be flooded with counterfeit money, and people are on guard. But many innocent people, including Mrs. Hardy, lose money in seemingly reasonable transactions. The Secret Service and Mr. Hardy know something is happening around Bayport, but they cannot discover who or where. The Hardy Boys use their investigation skills and lots of courage in dangerous situations to discover the counterfeiting gang.

Much has changed in America since 1927. The modern listener may be delighted with the warmth and innocence of the characters, but uncomfortable with the racial, social, and sexist terms and stereotypes. As such, this book is a part of our heritage, a window into our real past.

What listeners say about The Secret of the Old Mill

Just avoid until they get rid of Wayne.

Guy couldn't talk his way out of a paper bag...

Nice memories from my youth

Fun story from my youth. It was easy listening but I did not like the narrator’s style .

Enjoyed these books. but!

The book was great. Story line was perfect!! The narrator was a poor choice. His performance and mispronouncing of words was distracting. They should have used Tim Gregory.

So different from the revised version!

Once again, I am amazed how much different (and in my opinion, better) this version of the text is compared with the revised version I read in the 1980s. Another great installment in the series. I'll continue purchasing them as long as they continue to be released.