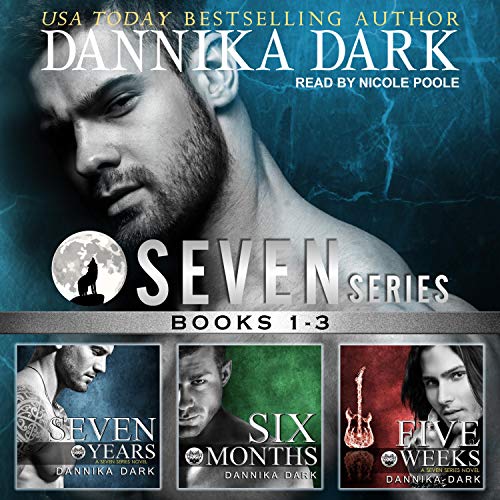 Seven Years: Lexi Knight hasn't seen Austin Cole since her brother's funeral seven years ago. Now a dangerous bounty hunter, Austin reveals he's also an alpha Shifter. But there's another shocking twist, putting Lexi's family in danger. Can their relationship be salvaged from the ruins of their past? Sexy, funny, and heartwarming.

Six Months: April Frost is a young woman who was set up for failure but refuses to become a product of her environment. After her father died and her drug-addict mother left her and her sister to live with their grandmother in a trailer, April focused on school to prepare for her future. But nothing could have prepared her for Reno Cole-biker, ex-military, and Shifter. Will April find her fairy-tale ending? Dark, intense, and full of hope.

Five Weeks: Izzy Monroe loves the freedom of living a rogue life, but after settling down in Austin, she runs into the last person on earth he expected to see again. Jericho is a local rock star who lives in the fast lane and Izzy's former best friend. Fate reunites two former friends living with one foot in the past and the other in the present. Old habits die hard, and sometimes the toughest addictions to shake are the ones that control our hearts. Suspenseful, wild, and chemistry that's off the charts.

I liked 1st and last book.

Over all good collections of book.

I don't like the character of April.. Just whyning all the time so 2nd book Remo is good but heroine doesn't even connect.

Last book is good too.

Book 1 and 3 I loved which is reason I rated it high. I don't like April for some reason so book 2 was just not doing it for me.

Not bad not great

I read that there were several people that didn't enjoy the April book... aka the 2nd book... the story wasn't awful or anything but the "baby" voice in the narration was terrible and what made it awful. I've never read anything like these before so it was just very different from my norm... but I loved how many hours it was because I always listen to my books while at my office so it lasted a week for 1credit. the fantasy books are hard for me to get into honestly.

The first book was okay. I didn't care for the whole 'feminism means running into a fight even when you CAN'T FIGHT and you just keep putting people, including children and the people who actually CAN FIGHT, in danger" thing. It drove me nuts.

Got past that and on to book 2. Horrible. I absolutely HATE April. Not just the childish, air-headed-sounding voice, but the story about her itself. She makes the dumbest decisions and even her justification for those decisions is equally ridiculous. She's also super shallow - she'd just survived an attack and being almost burned to death and she's concerned about her hair? Really?

I may make it to book three, but I'm not sure at this point.

I try not to read reviews because people have different tastes but this time I feel what everyone is feeling. Book to is honestly terrible! The baby voice makes this story feel pervy…. She claims she kept her head in books buts she one of the most dimwitted characters in this series. She back peddles which is annoying as hell. The man described as Reno doesn’t seem like he would be with someone so airheaded…. It’s torture to read but I had to see it through…. But dear god this feels like a father/ brother daughter/little sister type of relationship with intimacy…. And I feel gross for reading….

Nicole Poole is absolutely amazing with the characters and action. She gets every nuance right and the separate voices, although the same voice, are understood . No rewinding is necessary to catch on.

The world is set up well. I'm on to the next. Can't hardly wait to see what is next.

Book 2's Lead female character's voice is so terrible and fake I could never get into the story. Her character was sometimes hard in Book 1 and in that it was bad but didn't last long but OMG book 2 was torture. Playing at double speed made it better but still bad. I think it would have been better with another narrator.

These weren’t a favorite for me. Book 3 was the best of them. It fell flat and didn’t have that special something Dannika puts in her books..:-/

I really enjoyed book 1 and 3 but book 2 was one of the worse books I have ever read! That girl should not be a narrator, that baby voice made me get the creeps when she was “acting” like an adult. I had to fast forward through most of that book. Please do not ever use that use to read adult books, she sounds like a toddler. The character was stupid anyway and her voice just made the book a joke.

I enjoyed books 1 & 2. Great character building & good strong romance. Loved how giving & protective the male characters were towards the women.. However, book 3 had me confused. The males were more hateful & not caring about the main female. I lost respect for the Pack Master.

This entire series is a magnificent addition to the world build started in the Mageri Series. It isn't connected during these three books but the world is the same & there is a familial connection later on!🌍👍

We slowly get to meet a family of wolf shifters that are establishing a new pack in Austin, Texas. The Weston Pack's Alpha, Austin Cole, has come to visit an old friend now he's not so consumed by the grief at the loss of his best friend & her big brother. It's taken him seven years to return.💔

Each book in the box set is set around a different brother as they find their life mates & grow the pack. Of course nothing is quite that simple & each story keeps you gripped by its differences, steam & love story whilst each battling to find their happily ever after!🔥💘🙏

I thought the narrator did a good job bringing these characters to life.👍 I highly recommend this box set & series!🌟🎧

I absolutely loved this trio and can't wait to get started on the next book.
the characters are great and their stories are so full of depth. x

not worth the credit

lost me. very rapey characters. includes confronting themes like slavery, ownership of females etc. nope. Didn't actually care if the characters in the first book got together.
Narrator did a good job on the first story. The whiney voice in the second story drove me nuts, so I stopped listening.