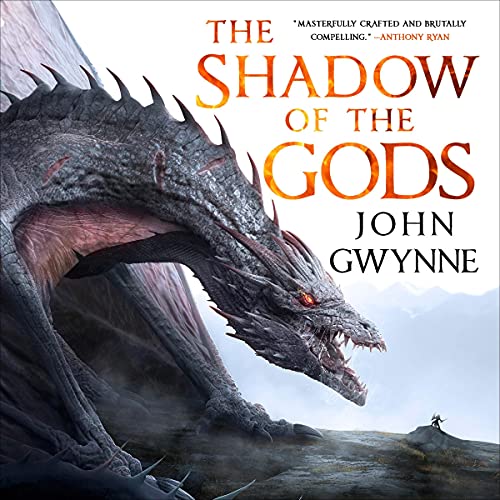 The Shadow of the Gods

From acclaimed fantasy author John Gwynne comes the first in the Bloodsworn trilogy, an epic of wild lands and wilder magic, where not all monsters fight with tooth and claw...and the treasures of the gods come at a price.

This is the age of storm and murder.

After the old gods warred and drove themselves to extinction, the cataclysm of their fall shattered the land of Vigrio.

Now, power-hungry jarls carve out petty kingdoms, and monsters stalk the shadow-haunted woods and mountains. A world where the bones of the dead gods still hold great power, promising fame, and fortune for those brave - or desperate - enough to seek them out.

As whispers of war echo over the plains and across the fjords, fate follows the footsteps of three people: a huntress searching for her missing son, a jarl's daughter who has rejected privilege in pursuit of battle fame, and a thrall who has cast off his chains and now fights alongside the famed mercenaries known as the Bloodsworn.

All three will shape the fate of the world, as it once more teeters on the edge of chaos.

For more from John Gwynne, check out:

Of Blood and Bone series: A Time of Dread, A Time of Blood, and A Time of Courage

The Faithful and the Fallen series: Malice, Valor, Ruin, and Wrath

"Gwynne, a Viking reenactor, puts in the work, with fine historical details that make the story come to life. Fans of the era will be delighted with the accuracy. This is a duly exciting start to the series." (Publishers Weekly)

What listeners say about The Shadow of the Gods

Was good but the narrator...

Well this is the first book in this series, as far as this book is concerned it was good.

I hate to disagree but here we are. I had read The Faithfull and The Fallen series (which I thoroughly enjoyed) and many reviewers I trust said this book is the finest work of the author, as I said I disagree because:
1. I didn't enjoyed the story as much as other people did because except Orka's story other POV's stories hardly progresses(until 90%) in a standard one book, I think. I was bored most of the time, and the narrator was not helping.
2. There are still 2 books to go, to justify "finest work" claim.

My biggest criticism is the narrator. His voice is phenomenal but not his narrative skills, his constant change in sound volume is, to be honest, annoying and irritating. At times I don't know who's talking. If you people find this a problem I strongly suggest you to buy the physical or ebook.

Amazing book with an unamazing narrator

The book is amazing, the story is enthralling, and the narrator was the only thing detracting from the book.

Seriously, his voice wasn't great, he constantly mispronounced words, and his characters weren't distinguished from one another even if the writing was. I'd pay to have someone else read this book tbh.

I have heard nothing but gushing reviews for this book, things like "If you like Brandon Sanderson you'll love this book!" but I see zero comparison. Everything I love about Sanderson was missing in this book, especially interesting characters and a protagonist to root for. The three POV characters were all interchangeably boring from a perpetually unhappy mother who became murderously angry searching for her son (understandable but still not interesting) to Varg, a former slave sad-sack who could have been a great POV but just lacked any qualities to be able to empathize for him to finally a another character I have hardly any memory of or care for (nothing happened to her that I can recall).

I'm happy others liked this book, and perhaps the narrator just made the characters sound sad and uninteresting but I could barely finish this book (I hate to DNF) and ultimately I will not continue. Also, I hope to never hear the term "thought cage" again!

Ive become a bit conservative with my book choices recently, cause when i take a chance on a book without a large preexisting fan base i usually regret it. This time I don't.

The worldbuilding is excellent and original, with a cool blend of high magic and gritty historical realism that work together surprisingly well. The story is interesting, and each of the characters has a few secrets that we get to tease out as we go. The narrator was excellent, although be warned that hed sometimes skip right over natural pauses in both internal and external dialogue--a habit which could be jarring--and his character voices could blend together sometimes. All in all, really impressive work.

If i have a criticism for the story, its that at times the MCs feel a little one dimensional and predictable. Id like to see them grow a bit more as people over the course of the book, maybe have a few more moments of inner conflict where the inevitable choice isnt so clearly obvious. Otherwise it was an absolute gem, and im probably going to reread it more than once. When all is said and done thats really the highest compliment i can give.

TLDR: This book is excellent and i do not at all regret spending my credit.

John Gwynne is one of my favorite authors. John writes Epic Fantasy that will remind you of David Eddings, Robert Jordan and Robin Hobb. Colin Mace is brilliant performing this novel which uses 3 POVs to spin the tale. I could listen to Colin Mace performance for hours at a time. Definitely one of my favorite narrator as this is the third series I have listed to that Colin has been the performer. If you want to experience one of the best marriage between author and narrator check out this new series.

This was a great story 10/10! And very excited for the next one! It was a refreshing new world that felt alien and exciting compared to a lot of fantasy I have read. Great work! My only criticism is I would have liked a little more exhibition and a few more slow moments for the reader to get their bearings in this violent world.

The reader made odd pauses in strange places in sentences. While I felt like the pronunciation on was on point, the voice was so monotone that it made it hard to tell who was speaking and from what perspective. It honestly made the book a lot harder to understand.

I plan to buy a version I can read to myself because I feel like I would enjoy it much much more! I recommend this if you don’t mind a performance that feels a little rushed. Otherwise read it with your eyes at some point.

None of the POV storylines are very interesting or compelling. To say this story is slow paced is an overwhelming understatement. The author seems to want to portray things in gritty realism, which is usually good in a novel. However, he then fells the need to inject SJW politics into this realism, which denuded it. The strongest warrior who became Jarl of course is a woman. The best warrior in the war band is again a woman. And there are other examples. It is perfectly fine to have women in leadership roles, but not through masculine traits, especially masculine warrior traits. When good authors portray women in leadership roles, their power is derived through lineage or magic or some other source that is realistic— with respect to the story at least—to their roles. I will agree with other reviewers who stated that because of the numerous names and terms the story may be better read than listen to; however, reading it will not remove the boring slow pace aspect of the story. And if I had read this book instead of listening to it I would have more than likely given up after the fourth or fifth chapter instead of making it to chapter 11. I have to disagree with other reviewers who have complained about the narrator. I find him to be above average, not as good as Roy Dotrice or Steven Band, but better than many others.

John Gwynne is my new favorite author, by a long shot. I highly recommend his other 2 series as well

My first, but not my last, John Gwynne book

I had never read John Gwynne prior to this title ... hell I had honestly never heard of him (to my shame), but wow, I am certainly glad I took a chance on this book. Sure, the main reason I did "take that chance" was due to the amount of positive reviews, but come on ... the cover? that fantastic cover is what originally piqued my interest, pulled me in and virtually forced me to listen to the 5 minute "sample". Yeah, hooked me from there.
But hey, an exciting cover rarely means an exciting read/listen, but trust me, this puppy is just as intriguing on the inside as it is on the outside. What you have here is not only a captivating story, but a captivating story with great narration as well. Really fits the tone of this book.
Well, that's all I have really, so I will close by quickly adding that I am now off to spend more Audible credits on more John Gwynne books!

Slow to start and whispering narrator

The story is painfully slow to start. There’s lots of terminology that no one would know that’s never explained, or explained very late in the book. Eventually it picks up and the end makes you want to know what happens next. The narrator is okay. Greg voice but there is 0 excitement or animation to it, and anytime a character is speaking he whispers. People don’t talk like that. Overall I don’t think it was a waist of time, but it could have been better with a different narrator and more explanations of unknown terminology.

Absolutely exhausting book. I was intrigued at first but ultimately never hooked because there wasnt a chance to empathize or build a relationship with anyone.

This story centers on 3 uber fighter POVs on quests to avenge loved ones or something. Everyone around them is only there to kill or die, with more than enough gore to numb the reader quickly.

Everyone has a name but there's no characterization so it's an endless stream of surprise murders and and expected killing to the point I was completely numb and ultimately quite confused because theres no distinction between anything or anyone. Just dying.

The world is kind of cool but so brutal I'm confused how humans could actually survive in such a place.

Maybe the next book is better?

I listened through the whole book, but it was the last 2 hours of the book when it finally got interested and then it ended without neither really leaving me feeling satisfied or wanting more. I really liked the three main characters but I never got as invested in them as I wanted to. I'm unsure whether or not to listen to the next book - I feel like it either could be exactly what I was missing from this book or just another meh-experience.

A saga enriched with norse mythology. I will be buying book 2. A lot of players to keep track of, not all of them human.