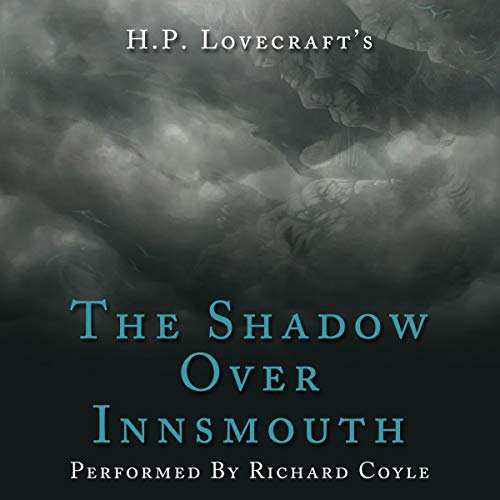 The Shadow over Innsmouth

The perfect H. P. Lovecraft title to follow on from 2010's At the Mountains of Madness, and the only HPL title not to appear in a periodical! Perfect also because it is split in to 5 distinct chapters...ripe for abridgement into five half-hour episodes!

The Shadow Over Innsmouth tells the first-person story of a young historian, Robert Olmstead, who, while investigating his family genealogy in New England, is intrigued to learn about a hated and mysterious fishing town called Innsmouth. When he visits he finds the place to be run-down and near-deserted, with a cult-like religion and a strange, degenerate population. His investigation soon turns into a race to escape the town and the the evil creatures he sees emerging from the sea.

The Shadow Over Innsmouth was written by H. P. Lovecraft in 1931 and is the only one of his works of fiction not to have initially been published as part of a periodical. It continues HPL's Cthulhu Mythos, featuring townspeople worshipping the elder sea god Dagon and mentioning the mysterious Shoggoth creature of his other works.

Howard Phillips "H. P." Lovecraft (August 20, 1890 - March 15, 1937) was an American author of horror, fantasy and science fiction, especially the subgenre known as weird fiction. As early as the 1940s, Lovecraft had developed a cult following for his Cthulhu Mythos, a series of loosely interconnected fiction featuring a pantheon of humanity-nullifying entities, as well as the Necronomicon, a fictional grimoire of magical rites and forbidden lore. His works were deeply pessimistic and cynical.

Although Lovecraft's audience was limited during his life, his reputation has grown and he is now regarded as one of the most influential horror writers of the 20th Century. Stephen King called him "the 20th century's greatest practitioner of the classic horror tale." This 2011 adaptation comprises five episodes, originally aired on BBC Radio 4 Extra, once again read by the superb Richard Coyle and featuring music by acclaimed composer Jon Nicholls. The series is offered here in exclusive extended edition.

What listeners say about The Shadow over Innsmouth

Narration was perfect, the score in the background was simply amazing. One of the best works by HPL.

Oh My God I was not expecting this when I decided to delve into my favorite type of horror. One thing about lovecraftian fiction is that it doesn't matter who reads it, it's all about how they read it and this guy is spot on! The moment I saw I could pick who read the story I flicked through the list, tossing them aside one after anothe, until I heard it. Richard Coyle, where ever you may be, you have a gift for this and I am honored to have heard it. But seriously, it's hard to set the proper tone for a story like this and it's kinda what kept me from audible for awhile. But this guy? This guy did it for me, great story told be a great voice actor, cheers from me.

The narration was marvelous. Lovecraft at his best

Richard Coyle brings this undying classic to life with perfect narration. The music is perfect also

What made the experience of listening to The Shadow over Innsmouth the most enjoyable?

What made this audio drama enjoyable was is this was yet another very well crafted story by H.P. Lovecraft. A story that is wonderfully produced and narrated by Richard Coyle and company. It is voice acted in many parts, alongside the narration, and every part is a fascinating joy to listen and imagine in your mind IMHO.

There are also well done sound fx's and background music that is tastefully weaved into the narration and acting. Each are brilliantly used to create and set the mood and atmosphere for the story and setting. However, these audio fx sounds, and background music, never overshadow the story itself or the voice acting. In other words, they are well done in a way so that they only lend to the atmosphere created by the story and narrator. Of which, Richard is a great voice actor and his voice is well suited for these types of stories. As you can tell I'm a fan of his work here and with another HP Lovecraft story he narrated called the "At The Mountains of Madness".

What other book might you compare The Shadow over Innsmouth to and why?

"Over the Mountain of Madness" another H.P. Lovecraft masterpiece. The version that was also narrated and voice acted by Richard Coyle.

The scene on the docks when the old town drunk in the story is "spilling the beans" on what he knows after the main character shares a bottle of alcohol with him. This scene gives a tremendous amount of background lore about the wonderfully chilling Cthulhu mythos that H.P. Lovecraft artfully and originally crafted into what we know call the sci-fi horror genre.

Yes. It's almost impossible to stop listening to this audiobook/drama once you start down that grim-dark Lovecraftian path of Cthulhu dark intrigue, horror and suspense.

If you pick this story up then do yourself a favor and also pick up the companion story called "At the Mountains of Madness" which is also read by Richard Coyle.

best narration for this story

Almost perfect,
Best sound effects, narration and pacing of an version of this story I've found.
My only complaint is that for some reason they found it necessary to introduce the book and do the credits at the beginning of EVERY chapter... it's a short story, give me a break. Weird, unfortunate choice.
Very minor in the scheme of things.

I am a huge fan of HP Lovecraft, and this is one of the finest readings of his work I have ever heard. I plan to find out if this reader has recorded other Lovecraft works and if so I plan to listen to them. This reading is augmented by very effective and spooky background music. I was skeptical at first about the music but it heightened the sense of horror and suspense of the storymn

Absolutely excellent execution from Lovecraft and Coyle. I would have preferred a lot more sound effects but it was still engrossing.

The story is very strange, a bit confused, but ultimately the narrator does it great justice with a great reading. If you're looking for something to get your heart pumping The Shadow Over Innsmouth will do the trick. This is a fairly short story so it's a good listen for in the car.

a nice story to drown your sanity in at work

the most atmospheric story i ever listened too. would recommend to anyone. well earned 5

The story is one of the essential Lovecraft reads and the performance was absolutely on point.

Highly evocative performance with superb narration and music complimenting it perfectly. I recommend to anyone who appreciates Lovecraft's work. Very enjoyable.

Richard Coyle is excellent with the narration on this. The story is great, and the atmospheric music that accompanies this adds to the creepiness.

This was originally on BBC radio, and has a lot going for it. Well edited story. superbly acted, with the best original music and sound.

My only criticism is that it does cut a shade too much material compared with the HorrorBabble version. If you really want complete author's cut.

Richard Coyle narration was very well done and easy to listen to.

Classic HP Lovecraft, an amazing story, well read , with just enough suspense to make you jump if you hear something outside..

I first heard this adaptation on Radio 4, when I discovered Lovecraft.
Since then I've listened to it again on You Tube & now on Audible.
This is a superb rendition, the background soundtrack is unsettling & adds to the narration.
As for the nameless narrator, poor sap spends the first half of the story trying to avoid the fish frogs, or is it the frog fishes, 🐙🐙only to discover that he is becoming one. The only answer is to apply to join the Esoteric Order of Dagon & embrace the Lord Cthulu, The window, the window 👾👾👾

Pitch perfect narration and wonderfully atmospheric background music and ambience, only this and At the mountains of madness available right now but I'd love more of these!

Yes I recommend this book but to whom? Very few like Lovecraft or have even heard of him.

What other book might you compare The Shadow over Innsmouth to, and why?

The case of Charles Dexter Ward
The Call of Cthulhu

The ending - so gently introduced but inevitable

Couldn't stop listening it was simply amazing the reading made it all seem too real!

After only hearing snatches on BBC R4Extra great to catch the complete story. Very Atmospheric.

Richard Coyle has the perfect voice for this story - he does a very fine job indeed. I immediately went and purchased 'At the Mountains of Madness' (also read by Coyle) since I enjoyed this so much.

Loved this! Richard Doyle narration is top level, it's easy to listen to and the music and sound effects make the whole experience very immersive! I highly recommend for anyone who is a longtime or new to Lovecraft's tales.